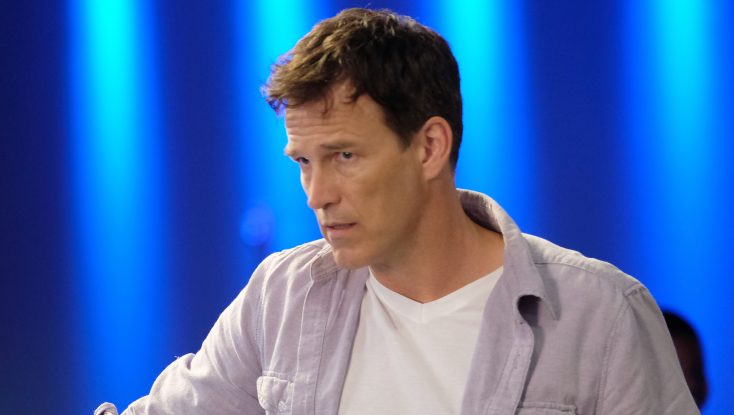 HOLLYWOOD—Set in Marvel’s X-Men universe, Fox’s new drama “The Gifted” stars Stephen Moyer (“True Blood”) as District Attorney Reed Strucker, who is in charge of capturing and prosecuting mutants that commit crimes. But when he discovers his teenage children, Lauren (Natalie Alyn Lind, “Gotham”) and Andy (Percy Hynes White, “Night at the Museum: Secret of the Tomb”) carry mutant powers, he and his wife, Kate (Amy Acker, “Person of Interest”), are forced to go on the run from the government. They soon find help from an unlikely source: a group of underground mutants, the very people Strucker has been hunting. The TV series was created by Matt Nix, who also created Fox’s “The Good Guys” and USA Network’s “Burn Notice.”

Moyer is best known for his role as vampire Bill Compton on the successful HBO vampire series “True Blood.” He’s married to the star of that series, Anna Paquin, and has just directed her in a new movie, “The Parting Glass.”

The British actor came to the TV Critics Association tour to talk about his new show and role, which is surprisingly normal after playing a vampire for so many years. “The Gifted” premieres on Fox at 9 p.m. Monday Oct. 2.

Q: Were you asked to watch the “X‑Men” films or read the comic books?

Moyer: We were not sat down, tied up and forced to do that.  But, obviously, the films are open to us. And Marvel made the entire Marvel Unlimited app available to us, which is a great resource. It’s almost like the iPad was invented for comic books really, because the world comes to life in that iPad app. So, there was this massive resource that we could all go down the rabbit hole in our own way, or not.

Q: Can you talk a little bit about your character’s journey and where he’s going?

Moyer: I think Reed starts this journey believing that he’s doing the right thing. He’s doing his job, and he thinks that he’s enforcing this world view and doing it in the right way for the good of society but also for the good of the people who are unable to control their powers. It’s not until he sees from his own children (what) they’re going through that he starts seeing other people who are equally gifted and how difficult it is for them to exist in society without being ostracized or abused. He starts questioning his own existence. (In) the pilot, he does get separated (from his children) and so, for him, the quest is to get back to his kids.

Q: Is there a possibility that your character is also going to have a power later on?

Moyer: One of the things that I was really excited about when I read the script was the fact that he didn’t have a power, because, obviously, I had done a lot of that (on “True Blood”), and I liked the fact that he was the ordinary in the extraordinary. Never say never, but as far as I know, and I don’t know, there is no intention of doing that.

Q: Are the gifts hereditary. Does Reed’s wife have powers and that’s how the kids got them?

Moyer: There is a genetic element as well, I think. But it’s also the idea that the mutant gene is in the world and that you have the gene, and it’s whether it gets enacted.

One of the exciting things that we are exploring is about the cost of what the power is. We had the same thing on “True Blood.” If you can go a mile in 30 seconds, that’s fantastic. But what does that cost your body?  And so, there’s a certain element of being able to do these things that will deplete you and make you unable, perhaps, to be able to use that energy or power in the same way again.  And that, I think, is a really exciting idea to explore, and we do.

Q: You said you were excited that your character doesn’t have special powers in this. Is that just for the sake of doing something different, or is there something exhausting or difficult for an actor about playing someone with powers over years like you did?

Moyer: I don’t think it’s difficult. It’s a lot of fun doing that stuff. And because I’m such a student of film, and I love film technique, I very much love the magic of trying to create all that stuff. So, I find that empowering and it energizes me as well. But I certainly don’t want to be pigeon-holed, and so for me the thing that really attracted me to it was the idea that, in a way, he’s different because he isn’t one of them.

Q: What are the biggest challenges for you being an actor and having a family?

Moyer: It is challenging. Just this week I was in Atlanta after having a great few months in Los Angeles, directing a movie that Anna (Paquin) and I did together. I’ve been editing that film.

Suddenly, you get to a place where you are working and you haven’t got your kids or your partner with you. You haven’t got your dogs or any of your normal stuff with you. You’re in a new place and, at first, it feels odd and weird to not have all of that around. Then there’s this hollowness that takes over, where you’re like, ‘What the **** did I used to do before I had all of this ****?” And this is the bit I don’t like; then you start moving on without that stuff. You start getting used to it, and it’s a weird feeling. You’re by yourself again and if you’re not working, and you have days off, you’re alone because everyone else is at work. So getting used to filling that gap can sometimes be a disconcerting thing. When I tend to start feeling that, I need to go and see (my family) so that I don’t get too used to that feeling.

Q: Do you have a best day in your career and why?

Moyer: My very first feature was a film called “Prince Valiant.” I played Prince Valiant, and there was this day where they put me on a horse and I was by myself on the beach. All the cameras were miles away because they were doing this big wide shot. I had to canter away from the camera. They said, “Just go for 30 seconds,” (and) this was a 10-mile beach in Wales, and I went for two or three minutes. Finally, I turned around and everyone was running after me, going, “Stop!” I galloped towards them in the water, in bright sunshine. They were literally about two miles away. Honestly, it was one of the happiest days of my life.