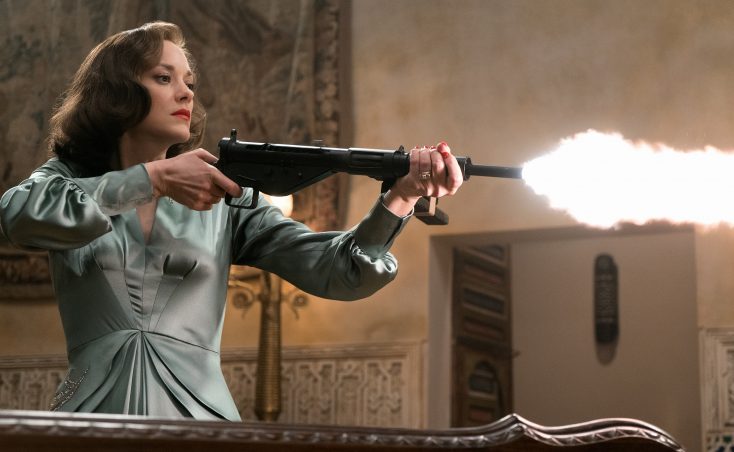 HOLLYWOOD—Marion Cotillard looks smashing in a bright blue dress with colorful accents designed by former pop star Victoria Beckham as she arrives for a press conference. The French actress has the ethereal glow of pregnancy (her second).

Having discounted vicious tabloid rumors that she and her “Allied” co-star Brad Pitt had an affair during production of their World War II-set romantic drama, the Oscar winner is carrying the ball by promoting the film like a trouper. She has been in a happy long-term relationship with French actor Guillaume Canet, with whom she has a five-year-old son, Marcel.

To avoid inappropriate questions from the press, the studio has required reporters to submit their questions in advance. Instead of asking the pitched questions, though, the moderator, a studio-friendly American TV personality, decides to ask mostly his own. Nevertheless, after the formal press conference, the tenacious reporters from around the world raced toward Cotillard, who graciously remained in the chic hotel ballroom for several minutes and answered their questions before being pulled away by studio staff.

In the Robert Zemeckis-directed romantic drama, the Oscar winner (“La Vie En Rose”) plays Marianne, a member of the French Resistance who initially is stationed in German-occupied Casablanca to carry out an assassination mission with Max (Pitt), an undercover Canadian (Allied) operative. The two pose as a married couple as they arrange to attend a party hosted by the German leadership. After carrying out their mission, the two, who have fallen in love, retreat to the English countryside where they marry and have a child. The war, however, is still going on and one day Pitt’s character gets called in by his superior, who suggests that his wife is likely a spy for Germany. In disbelief, Max tries to figure out whether or not the woman he loves—the mother of his child—is actually working for the enemy. The drama also stars Jared Harris, Daniel Betts, Simon McBurney, Matthew Goode and Lizzy Caplan.

Q: What was it like getting prepared to play such a complex character and someone who’s basically also an actress?

Cotillard: Because of the complexity of the feelings and of the story, we talked a lot about it before we started shooting and that was a great time to share what we thought to share, what we really wanted to tell with this story, which is a love story, basically. I read the script about four years ago—it was a long time ago. My agent gave it to me and I thought it was such a beautiful story, very entertaining and at the same time super deep, super powerful, and I was waiting for it to be made. When I read the script for the first time I didn’t hear of Bob (Zemeckis, the director) or Brad (Pitt) being involved. I was so happy few years later when they contacted me asking me to be part of the project. I like the fact that it is a very strong and deep story and, at the same time, it’s super entertaining.

Q: What does it mean to do this movie at this point in your life because it’s a very emotional movie, and now you’re going to have another baby, so there’s probably a lot of emotions all around you in your life?

Cotillard: I have never done such a movie that was very close to the movies that I watched when I was a child and gave me a desire to be an actress. As I said earlier, there were all these movies that I watched when I was a kid. My mom and my dad were film fans and particularly liked American movies from the ‘40s and ‘50s. Greta Garbo, Audrey Hepburn, Ingrid Bergman, Katharine Hepburn, so I watched a lot of these movies. When I was a teenager my favorite movies would be “The Philadelphia Story” or “Camille.” Those films fed my dream to be an actress so when I was approached for this movie I felt that it was jumping into my dream as a little girl.

Q: Did you talk to any women who survived the war in London or Paris, maybe your grandmother about how they were trying to normalize their lives despite what was going around them?

Cotillard: Actually, I didn’t really feel that I needed that kind of preparation for that role because I did a movie few years ago when I started doing movies based on a story in World War II and I did a lot of research then and it really helped me to know the context of the war. I never felt I needed to study the spy world because I thought being an actress and pretending is something that I know and also I always thought she was not a very good spy that’s why she will follow her feelings more than her mission and then she can just let everything go and leave and have this kind of destiny that she knows she has to follow more than being faithful to her job and mission.

Q: That’s why it’s more a romance than a spy movie?

Q: One of the standout scenes is when Max and Marianne dress up, go out to the party and then all heck breaks loose, and they’re firing the machine guns. What was it like filming the scene? What kind of direction did Robert Zemeckis give you about shooting the gun?

Q: How did you feel about guns after handling them?

Cotillard: I still didn’t love the guns. On the day (we shot the scene) I freaked out, honestly. I knew I would be discovered as a very non-lover of guns and not very good with them and of course (director Robert Zemeckis) saw it so we did one or two takes and then he came to me and said, “OK, let’s take a break. Let’s take like 30 minutes and practice again but the most important thing is that you have to pretend you like them.” (She laughs.) I was kind of relieved that I would have this time because I was sweating and you had to be fast and to “bang bang bang,” and I really needed this half hour of training.

Q: Did the love scene in the car with Brad Pitt, which takes place in a dust storm, take several days to shoot?

Cotillard: That’s the kind of scene that is not very easy but we rehearsed it. We had very determined choreography, which allows you freedom. When you know exactly what your body will do then you can act and you’d be free to give the emotion, give the feelings because you won’t think, “Oh what am I going to do next? Am I going to go on top of him or…?” It’s an awkward situation. The three of us—Brad, Bob and me—just sat in this car, which was a fake car, actually, and we rehearsed. It was just two seats and we laughed because this is so weird. You get this time of looking at each other saying, “OK, this is so weird, and then we’re going to do this, and we’re going to kiss,” and blah blah blah. When it’s choreographed, it’s just easy. Then, on the day, it’s just you and the other actor, and everything happens because it’s the authenticity of the moment, and it becomes easy.

Q: Brad’s character had the challenge of trying to speak with a perfect French accent. Did you help him with that?

Cotillard: I know how hard it is to speak a language perfectly because when you start in your life to learn another language that you’re not familiar with. I started learning English when I was 10. It’s too late. Well, it’s not too late if you move to England or America and you have a total immersion but when you start learning English when you’re 10 or 11 with a French teacher who teaches you how to speak English like that, it is. (She demonstrates English with a French accent.). At that age, it’s A) too late and B) it’s probably going to be a disaster if you really want to speak English very well.

When I did “Public Enemies,” (director) Michael Mann wanted to erase my French accent, which was not really possible in the amount of time we had but I worked for six months every day basically working on two sounds—the R and the L. I spent hours in front of the mirror crying, re-educating my jaws and tongue and palate and teeth—my whole face. It’s an amount of work that is really crazy.

So (Brad Pitt) did an amazing job because I know what it is to go from French sounds to English sounds and it’s the same the other way. There are sounds that you never ever used and more than sounds. There are places in your face and even in your body and the resonance and your upper body and your lower body that’s super technical and super difficult. I had this commitment to do the best he could that was really really impressive. So I helped him by being very tough. (She laughs.) I was very honest with him but at the same time I really wanted to support him in this process that I went through and I know how hard it is.