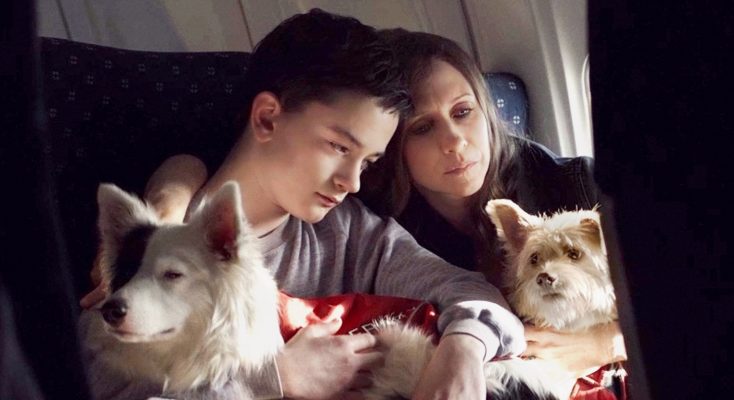 HOLLYWOOD—Shana Feste burst onto the filmmaking scene in 2009 with her heartfelt debut drama “The Greatest,” about grief-stricken parents struggling to cope with the loss of their teenage son. The story was based on her own father’s experience with his wife prior to his marriage to her mother. Feste, who has gone on to make two more critically acclaimed family-themed dramas, delves into her own turbulent relationship with her dad, a charismatic ex-con who was AWOL for much of her youth, in her fourth film “Boundaries.” The film opened Friday June 22 in limited release.

The film stars Oscar winner Christopher Plummer (“Beginners,” “All the Money in the World”) as Jack, a charismatic but troublemaking senior who gets kicked out of his nursing home. It’s up to his estranged daughter Laura (“Bates Motel’s” Vera Farmiga) to pick him up and drive him down the Pacific Coast from Portland to her younger sister’s place in Los Angeles. Along for the ride is her artistic and shy adolescent son, Henry (Lewis MacDougall, “A Monster Calls”) and a menagerie of stray animals. Forced together for days in the crowded and confined space of Jack’s vintage Rolls-Royce, his prize possession, they discuss his failings as a father and more.

Jack convinces Laura to make a few unscheduled stops to ostensibly visit old friends, who are actually longtime clients of the pot-dealer octogenarian. The trip also affords Henry an opportunity to forge a relationship with his grandson, whom he recruits to assist him with his side gig, without alerting his daughter. Naturally, it’s only a matter of time before Laura figures out what’s going on but then it turns out she’s not so perfect, either. The film also stars Christopher Lloyd (“Back to the Future” films), Bobby Cannavale (“Ant-Man”) and Peter Fonda (“Easy Rider,” “Ulee’s Gold”).

At a small press gathering, Feste, who was raised in Los Angeles by her divorced mom while her father was away in prison or elsewhere, explained what drove her to write and direct such a personal story. She also spoke about how she gathered the stellar cast for the Sony Pictures Classics drama. Accompanying her was 16-year-old Scotland native MacDougall, who was only 13 at the time he was cast in the film.

Q: How autobiographical was this?

Feste: This was my father. He was a wildly charismatic man. He was married six times, had six kids. Women, children, dogs loved my father but he was a troublemaker. He loved breaking the law. He trafficked marijuana. He was charged for RICO for beating a casino. He went to Africa and smuggled diamonds in the back of his cowboy hat. He stole a gold bell out of a church in Mexico. He’d come back and have all these jewels and stories and we’d have tons of money and then the next day he’d lose it all in a poker or football game. He also was a bookie for a while. So, when I had my first son, Waylon, I wanted to spend every day with him and not leave him for four or five months (as my father did). It was incredible painful at that moment because I thought, “How could my father have done this for so long, coming in and out of my life?” He wasn’t there when I really needed him. Having my first son, Waylon, made me want to investigate my relationship with my father.

Q: Why did you cast Christopher Plummer as Jack?

Feste: One of the big worries of the film was would the audience judge (Jack, the father character). Are they just going to think he’s a despicable father? Why would they watch this movie and want to go on this journey with him? So, I knew I had to hire someone incredibly charming and charismatic like Christopher, who is like my real father.

Q: What was it like working with Christopher Plummer?

MacDougall: There wasn’t a lot of rehearsals, but that doesn’t really matter a lot. In those first few days, Christopher (Plummer) was trying to get to know me. He was talking a lot with me. I spent a lot of time with him early in the shoot so I got to know him a lot then. There’s a gap in age between us, but we have a lot in common. We’re a lot alike in some ways, so that was helpful. At the time (we shot this) I was a 13-year-old, and I think Chris is still a 13-year-old inside.

Feste: Chris was always the first on set. He was the first to get into makeup; his wife does his makeup, and he was ready to play.

Q: Did you and your father actually go on a road trip?

Feste: The road trip was the one time I actually had my father to myself. My mother raised me as a single mom in Los Angeles. My dad was from Texas. So, every summer, we’d get in his pickup truck, listen to country music for three days, and drive to Houston. I knew (during those trips) that my dad wasn’t going anywhere; I had him for those moments.

Q: Lewis, did you have to audition?

MacDougall: I sent in a tape. Then, I got called in and did a (scene) with the casting director, and got the job after that. I actually got the job before meeting Shana in person. The first day I met her was my first day on set.

Feste: I hadn’t even seen “A Monster Calls” yet. I knew in my heart that he was fabulous but I hadn’t seen his (performance).

Q: How did you know you wanted to be an actor?

MacDougall: I went to a drama group just as a fun thing with my friends. I still thought I was going to be a police officer, or something like that. There was an open audition at my drama group for my first movie, “Pan.” I ended up getting a part in that. So, it was through doing that film that I realized I enjoyed this whole experience. I had so much fun doing it that it made me want to do it more. Each film I do makes me realize why I love doing and I just want to continue.

Q: Has anyone ever pointed out to you that you look a little like Tom Hanks?

MacDougall: Yes. I’ve had someone show me a photo of Tom Hanks when he was young and, I must admit, he did look a lot like me.

Q: Shana, did your dad drive an old Rolls-Royce as Jack does?

Feste: No. He drove a pickup and wore Wranglers—nothing like Chris in real life. So, I had to make a lot of changes when I knew that Christopher was going to play this role. One of the changes I made was the car, because that says so much about his character. I didn’t want to put Christopher Plummer in a pickup truck because, frankly, I don’t believe it. But I do believe he would hold onto this prized possession, this old Rolls-Royce. When he drove it, I thought, “That feels right.”

Q: You also have Peter Fonda and Christopher Lloyd as Jack’s friends. How did you cast them?

Feste: I learned so much about my dad through his friends who had names like Tony the Ant and Blond Joey—very different kind of friends. So, I classed them up. I gave (the character) a fancy movie star friend like Peter Fonda, but I wanted to illuminate the Jack character with his friends. Once I cast Christopher Plummer, it was like a gold mine because everyone wanted to work with him. So, I thought, “Who would be my dream Stanley?” And that was Christopher Lloyd. We asked him to join us for two days (of production) in Vancouver opposite Christopher Plummer and Vera Farmiga, and he said yes. It was amazing.

Q: Is Vera Farmiga’s character Laura a lot like you?

Feste: I was writing this from a place where I could barely keep it together.  When you rescue animals, it can become almost an addiction because there are so many animals that need help. There was a time in my life when I was going to animal shelters two or three times a week and pulling dogs out that were on the kill list and desperately trying to find them homes. I was totally overextended and trying to keep my marriage together, which was falling apart, and trying to have a career. I had eight kittens in my shower and a pit bull that was getting into fights with my other dog that I’d had all my life. So, I was writing it at a time when I was trying to hold it all together. That’s something women have to juggle a lot because we have to play a lot of roles to so many different people. Laura, Vera’s character, is a caregiver and I was a caregiver as well but sometimes you run out of gas. And this was right as she was running out of gas.

Q: What made you decide to become a director?

Feste: I went to the American Film Institute and started writing. It was heartbreaking for me to give away my material to a director. I wanted to be a director but didn’t have the courage to say it out loud. This was almost 15 years ago when (female directors) wasn’t a conversation we were having, so I thought I’d be a producer, since I knew other women producers. So, I tried that and it was torture. I tried other aspects of filmmaking until I had the courage to do it myself. I wasn’t met with a lot of pushback.

Q: Do you see that we’re going beyond the conversation and into implementation?

Feste: I’m offered a lot of different scripts that I never was reading before. I’m curious who’s going to get those jobs. That’s the next step—not just being offered but actually hiring the woman.

Feste: Agents throw it around all the time. They say, “We want to see something more muscular from you.” What does that mean? There definitely are stories, like I’ve been dying to make a horror film. I have an action-thriller that I wrote 10 years ago. All of my other movies were easier to get made than that genre. So, hopefully, things will change there.

Q: Were you able to make amends with your father before he died?

Feste: Yes, he lived with us for the last three years of his life. I saw him parent my son, Waylon, like he should have parented me. He apologized to me. He said, “Bean, you didn’t get the father you deserved.” He felt a great amount of guilt for how he parented me, and I saw that in his relationship with my son. While I didn’t want to paint (a happily ever after), I wanted to show that there was hope for these two characters, that they might find the light in their relationship.