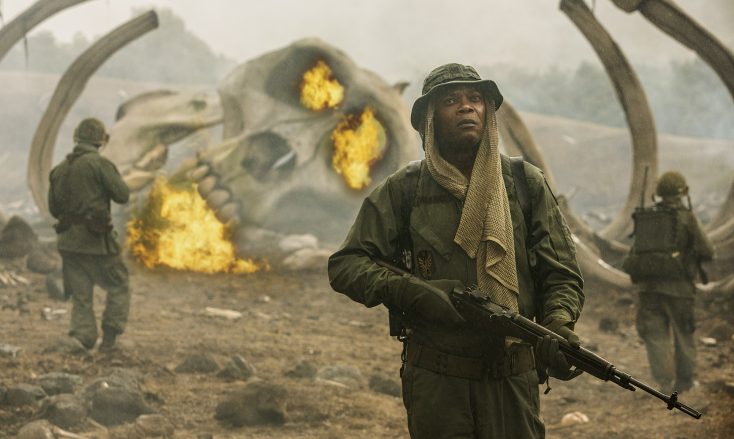 HOLLYWOOD—Samuel L. Jackson is regarded as one of the hardest working actors in Hollywood, and it’s not simply because of the sheer number of films he makes. The ubiquitous performer has raked in more than $4.6 billion to date, making him one of the most bankable stars.

Over the course of his decades-long career, the Washington, D.C. born, Tennessee-raised actor has traveled the world, shooting in exotic and familiar locations and gamely promoting his movies and meeting his legions of fans. He has been part of major franchises including “The Avengers” (as Sgt. Nick Fury, leader of S.H.I.E.L.D.) the “Star Wars” prequel trilogy (as Jedi master Mace Windu), the “xXx” franchise as well as a host of Quentin Tarantino films including “Pulp Fiction,” “Django Unchained” and “The Hateful Eight” to the silly “Snakes on a Plane” to the dramatic “Coach Carter” and “Freedomland.” He’s lent his distinctive voice to cartoons, video games and documentaries. He also is the authoritative pitchman for the Capital One credit card. (“What’s in your wallet?”)

With his signature Kangol brand cap, tortoise-shell framed glasses and beaming smile, Jackson accepts promoting his films as part of the job. He sincerely appears to enjoy being a movie star. Yet, at the same time, he seems down to earth and humbled by his good fortune.

The ubiquitous actor now stars in “Kong: Skull Island,” the second installment in Legendary Pictures’ Kong-Godzilla film series, in which he plays a career soldier who, upon completing his final tour of duty, signs up for a classified mission to an uncharted island in Southeast Asia only to discover a monster unlike anything ever seen before.

Set in the waning days of the Vietnam conflict, “Kong: Skull Island” is directed by Jordan Vogt-Roberts, who previously helmed the acclaimed coming-of-age dramedy “The Kings of Summer.” Jackson co-stars in the monster movie alongside Oscar winner Brie Larson (“Room”), Tom Hiddleston, John Goodman and Oscar nominee John C. Reilly. Jackson plays Packard, a lieutenant colonel in the U.S. army hired to lead a group of explorers on an expedition to an unchartered island in the Pacific, which quickly goes south when they run into the gigantic Kong. He said signing up for the film was a no-brainer.

“It’s something I’ve been wanting to do since I was a kid,” he explains. “I saw the first one and it’s like, ‘Wow, this will be fun.’ You go home with your friends and you pretend that big thing’s out there and you’re all running from it or fighting it or whatever. A lot of times, that’s it. It’s one of those movies I would have gone to see when I was a kid or one of those movies I always wished I could be in. For that same reason, I’ll probably end up doing (a remake of) ‘The Blob,’ which also was one of my favorite movies when I was a kid.”

He likens his character’s relationship to the hairy ape creature to that of “Moby-Dick’s” Captain Ahab and the whale—Packard wants to defeat it at any cost, even if it means sacrificing his crew.

The five-month film production took Jackson and the rest of the cast and crew from Oahu, Hawaii to Queensland, Australia to the northern region of Vietnam.  He was particularly impressed with Vietnam, a country he had never previously visited.

“I’d been to Hawaii and I’d shot in Hawaii before. I’ve been in Australia and I’ve shot in Australia, but never along the Gold Coast. Vietnam, I’d never been there before. It was very different awesome, interesting, and gorgeous,” Jackson recalls.

“One of the reasons to take this job was because we were going so many places. It’s like, ‘This is great! How many days do I have off in Hawaii so I can go golf?’ I lived right around the corner from one of the best snorkeling spots in Hawaii so that had its advantage. The Gold Coast, not so much. Vietnam was wonderful. Once we got out into the countryside, it was incredible. It gives you a different understanding of what the (Vietnam war) was and how difficult it probably was for the military advisers. In some locations, if you walk three clicks in one direction you’d be in Laos. We had people out there going around and clearing unexploded ordnance in some locations. They were out there clearing the ground for us because we had to do a lot of walking.”

The schedule could be grueling and making a film where the main adversary and other special effects elements were to be added in post-production, made it challenging. Jackson explains that he was never quite certain how big Vogt-Roberts planned to make Kong and other creatures. (Asked to comment on working with the director, he declined.)

“We were constantly asking, ‘How big is it? Where is it?’ and ‘How fast is it?’ Those were the questions and we got different answers but to be honest, (Kong in the movie is) way bigger than anybody ever told us he was,” he recalls. “I’m one of those pragmatic people so I’d say, ‘If he’s that big where does he sleep on this island that we can’t see?’ Or, “If he takes a ****, we should be able to see it or smell it. No matter where we are on this island, we can find him because he’s that big.’  When we were running in the boneyard, we kept asking, “Well how big are they? Are they bigger than an SUV?’ They’d say, ‘shoot anywhere,’ but you can’t shoot anywhere because we’re soldiers. There are guys right there, and if he’s running all around I can’t turn my gun this way. There’s a guy right there, I’d end up shooting my guy.”

Born Samuel Leroy Jackson in Washington, D.C., in 1948, the Hollywood legend didn’t set out to be an actor. His parents divorced when he was young so his mother—a factory worker—and her parents raised him in segregated Chattanooga, Tenn. If he failed to make good grades in school, his mother would ground him. That meant no football, no basketball, no band, no hanging out with his friends until he turned around his academic performance.

While his friends headed to football practice, Jackson went to his room or to the library to read literature or study calculus. He attended Morehouse College in Atlanta, where he studied marine biology and architectural design. Eventually, he decided to be an actor and headed to New York, where he studied and honed his craft, and began performing in plays and landing parts in film.

Never sticking with a specific type, the chameleon-like actor purposely has sought out varied roles in a wide range of film genres. His diverse credits include his Oscar-nominated performance as a philosophical hit man in “Pulp Fiction,” a crack addict in “Jungle Fever,” the title role in the 2000 remake of “Shaft” and the wise Jedi council leader Mace Windu in the “Star Wars” series.

Other credits include “Caveman’s Valentine,” “Jackie Brown,” “The Negotiator,” and “Die Hard with a Vengeance.” With his distinctive and booming voice, he also has voiced animated characters including Frozone in 2004’s “The Incredibles,” Mace Windu in the 2008’s “Star Wars: Clone Wars,” and Frank Tenpenny in the videogame “Grand Theft Auto: San Andreas.”

Never a blip in the tabloid world, Jackson has been happily married to actress LaTanya Richardson for 37 years, and the couple has a grown daughter, Zoe. His only addiction seems to be a penchant for playing golf wherever he goes.

A Hollywood veteran, Jackson has collaborated with filmmakers multiple times. Notably, Quentin Tarantino has cast Jackson in six of his movies, the most recent of which was the Oscar-nominated western “The Hateful Eight.”

“I shot a lot of close-ups of him but I’ve never shot them as beautiful as I did in this movie,” the filmmaker said during that film’s press junket. “You find yourself taking backstrokes in his eyes. It’s just the way it is.”

Jackson has no preference for character types; he’s simply eager to tackle roles that intrigue and challenge him.

“I just look at the character and, if I like him, I start figuring out ways to make his point of view mine,” he says.

The actor counts more than 100 feature films to his credit, and he’s not planning on quitting—or slowing down—anytime soon. Last year, he starred in the action adventure “The Legend of Tarzan,” the Stephen King thriller adaptation “Cell,” and the fantasy adventure “Miss Peregrine’s Home for Peculiar Children,” in which he played the antagonist to Eva Green’s protector to children with magical gifts. Upcoming projects include reprising his Nick Fury character in next year’s “Avengers: Infinity War,” this summer action comedy “The Hitman’s Bodyguard” and a role in “Kong: Skull Island” co-star Brie Larson’s directorial debut “Unicorn Store.”

A self-proclaimed fan boy, he often gravitates toward comic book adaptations such as Marvel’s “The Avengers.”  He also appeared in 2008’s “The Spirit,” an adaptation of noted comic book writer Frank Miller, who also directed the film.

In noted playwright Neil LaBute’s 2008 thriller “Lakeview Terrace,” Jackson plays an LAPD officer with a chip on his shoulder. Abel Turner’s beef wasn’t with a criminal foe or a commanding officer, but with his newly arrived next-door neighbors. A widower trying to raise two children and instill in them his high moral standards, he’s played a traditionalist with conservative values.

“Abel Turner had a definite point of view that he’s not afraid to express,” he recalled while promoting that film. “He had a moral compass. It just kind of goes another way.”

Jackson relishes the fact that the line between who’s good and who’s bad is blurred in that film.

The role of the angry suburbanite wasn’t the only one for Jackson, who played a similar firebrand in 2002’s “Changing Lanes,” helmed by Roger Michell, another playwright turned filmmaker. His character was pitted against a white adversary, but their dispute went far beyond race. In both projects, Jackson saw an opportunity to explore the mindsets of two extremely territorial individuals. He credits the filmmakers for looking beyond skin color to uncover the reasons underlying their anger.

“It’s great to have people who are more concerned about character and story than guys who are sitting there, looking at a monitor, worrying about the composition of the shot,” he says.

Jackson’s dedication and work ethic is what makes filmmakers return to again and again.

“I have the ability to read something, interpret it and, hopefully, create a character that I can present to the audience and they accept it, understand it and believe it,” he says.