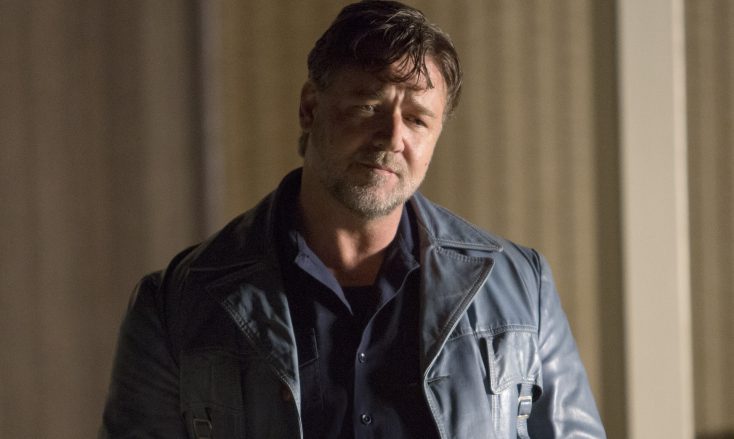 HOLLYWOOD—Although A-list bad boy Russell Crowe has mellowed since his phone-throwing, temper-tantrum days, the Aussie (by way of New Zealand) Oscar winner can still be rebellious.

For example, when he enters a Beverly Hills hotel room for an interview, the first thing he does is light up (after asking permission from those present, of course), even though the hotel prohibits guests from smoking inside its rooms. Any veteran film reporter who has interviewed Crowe, 52, knows that unless you want him to clam up or cut an interview short, you’d better allow him to puff. And, at least he asked.

The Oscar winner for 2000’s swords-and-sandals epic “Gladiator” and nominee for “The Insider” and “A Beautiful Mind” is downright amiable as he answers questions ranging from his love of smoking, vinyl LPs and bicycle riding to parenting post-divorce, to his new movie, the ‘70’s set comedy “The Nice Guys,” in which he is paired with People’s Sexiest Man Alive Ryan Gosling (Oscar nominated for 2006’s “Half Nelson”).

In the film, directed by “Iron Man 3’s” Shane Black, Crowe plays an enforcer who teams up with a down-on-his-luck private eye (Gosling) to find a missing girl. During their investigation the duo begin to uncover a shocking conspiracy that reached up to the highest levels of the justice system. Part comedy, part noir thriller, “The Nice Guys” is reminiscent of films like “Get Shorty” and Black’s previous “Kiss Kiss, Bang Bang,” which starred Robert Downey Jr.

Q: It’s interesting that Ryan Gosling’s character is the chain smoker in this instead of you.

Crowe: Whenever he was smoking in the room, he made me uncomfortable. I think that’s why he did it, because he smokes so much (in the film). I think that was his statement. It was unbelievable the way he did that. He came in and he was smoking that much, and then the millisecond we finished the film, I don’t think he’s touched a cigarette since.

Q: But he used to smoke?

Crowe: Yeah, but I don’t think he was ever fully committed to it, you know? I think he’s just a dabbler. (He laughs.)

Q: Is that something you miss from the ‘70s—the fact that you could smoke anywhere you wanted whenever you wanted?

Crowe: It’s something that should be pointed out, I think. Wherever you go in the world, to places you go where you still have to smoke in licensed premise, those are the places where bars are happy. (He laughs.) Find me a happy bar in Los Angeles (where smoking is banned). There’s a bunch of happy people on the street or standing around having a cigarette.

Crowe: I think they drink less because the have to keep going outside. I always wondered why the first step wasn’t actually taking out the chemical elements that are in the tobacco in the first place, which have caused the increase in diseases related to the act of smoking. I don’t understand why that wasn’t stage one.

Q: As the saying goes, if you remember the ‘70s, you didn’t live it? Do you remember anything from that time?

Crowe: I remember everything about the 70’s. I was only a little kid. But yeah, it was a time where I was being awoken by everything. It’s a great decade as far as I’m concerned.

Q: What about the far-out fashions like bellbottoms and polyester shirts?

Crowe: See, I think that’s one of things the movie does really well. It doesn’t give into that kind of extremity. So many of the films or TV series that get made set in the ‘70’s, everybody’s got colors that were really only seen on “Soul Train” worn by the performers like the O’Jays. It wasn’t as full on as some of the pastiche expressions of the ‘70’s have been. That’s one of the things I like about the film. You do have elements of that, particularly in the party scene and stuff like that, but everybody looks normal. They look real, sort-of centered in the world of Los Angeles and that’s partially due to the production designer (Richard Bridgland), the costume designer (Kym Barrett), but also Shane Black’s desire to not make that kind of pastiche thing.

Q: What about the music of that era? What do you remember from the time period? What did you like from the movie that took you back?

Crowe: I love the soundtrack. I’m definitely going to get it on vinyl.

Crowe: Yeah, I did this thing a couple a years ago where I just decided I was going to recreate the record collection of my youth. I’m about a third of the way through, so far, but I keep getting other stuff that I never had when I was younger. You can get so much stuff now. For example, one thing that I had not done probably since 1978—it’s probably uncouth for some people. If you have a big enough sound system, if you listened to Meatloaf’s “Bat Out of Hell” from beginning to end. That is an immense record. It’s immense, because you remember that was the hit single, but every single song on that is just crammed full of pop beauty, little riff lines, lines of lyrics and hooks, gigantic chorus and bridges from hell. It’s is a great record.

Q: How was it working again (after 1997’s “L.A. Confidential”) with Kim Basinger, who plays a high-level justice official in this?

Crowe: It was great. It was nice seeing her.

Q: Did you guys stay in touch over the years?

Crowe: Vaguely, we hadn’t physically been in the same room for over a decade.

Q: I heard you rode around on your motorcycle while shooting this here in L.A. and in Georgia.

Crowe: No, it was my bicycle. When I do things like that, I peek out on the day I start shooting and then I start to get strong. Any city I’m in, wherever I am in the world, I like to learn the north, south, east and west of that city and the best way to do that is on a bicycle.

Q: How many miles were you riding a day?

Crowe: About 100 kilometers per week. So like 60-70 miles a week. Some weeks were more because we’d be working way out of town. We did one week out on Stone Mountain (Ga.), so that was a long road.

Q: What kind of bike do you ride?

Crowe: I have a Scott mountain bike. I like to have a mountain bike because it doesn’t matter what the terrain is. I can be on the road or I can go off-road. My frame doesn’t suit a cruiser bike. I don’t like that tilted-forward position. I know it’s going to sound weird, but I like the safety aspect of having a wider tire, particularly when you’re riding in a town like New York and there’s a lot of construction. You’ll come around a corner and there’s some hole you’re going to fall into.

Q: Do you bring your bike to each location?

Q: You play a father in another movie you have coming out soon. Can you talk about your work in “Fathers and Daughters?”

Crowe: “Fathers and Daughters” is a beautiful movie. I don’t really understand what’s happened with that film, because Gabriele Muccino has made beautiful film. She’s made a surprising gorgeous film for a person of a certain age. One of the things I suppose about the film is it’s very challenging in some aspects and possibly too simple in its conclusion for some people. But I think it’s a beautiful movie and the little girl that I work with on that film, Kylie Rogers (star of “Miracles From Heaven”), is one of the greatest actresses I’ve ever met. She’s spectacular.

Q: What type of dad are you in real life?

Crowe: Well, if you talk to my ex-wife (Danielle Spencer, with whom he has two sons), she’ll give you a bad scorecard. (He laughs.) When I’m with my kids I always hear people talking about how together they are. We talk as freely as we can, as often as I can be with them, but at the same time it’s very important that they take and understand that I have certain privileges in life and I define for them what those privileges are. Here it is. We’re doing this particular thing. This is who you need to be grateful to, because that’s something that’s very important. They’re (12-year-old Charles and 9-year-old Tennyson) both very grounded. They’ve experienced a lot of amazing things because of my job, but they don’t take anything for granted and they’re humble about their place in the world and grateful for the things that come their way, if I can just keep them in that place, we’ll be good. (He laughs.)

Q: Having made a few dozen movies in your career, is there a character you feel you have unfinished business with?

Crowe: I’ve been really lucky in that I’ve been given some massive characters to play over the years. There’s a whole bunch of characters I’d love to do a second story with, for sure. It probably comes from the time period I grew up in but I’m not really into the sequel thing. I understand it and I get it (that sequels are popular today). One that comes up all the time is (Captain Jack Aubrey from) “Master and Commander” because that one deserves to be a number of movies by now.

They didn’t do deals like that to start with and it ended up being an extremely expensive movie to make, but I continued to read Patrick O’Brian’s books long after that movie was over. There are a lot of fantastic stories there, but that’s the one that comes up with people, and online they ask about it all the time. The complexities you have there is you have to deal with obviously the estate of the writer to start with, and then the original rights holder studio which I believe was Samuel Goldwyn, but the movie was made by Fox in partnership with Universal and Miramax. So (the difficulty of getting) all those people to the table to agree on how you go forward with the second is what stops it every time. There are just too many cooks in the kitchen.