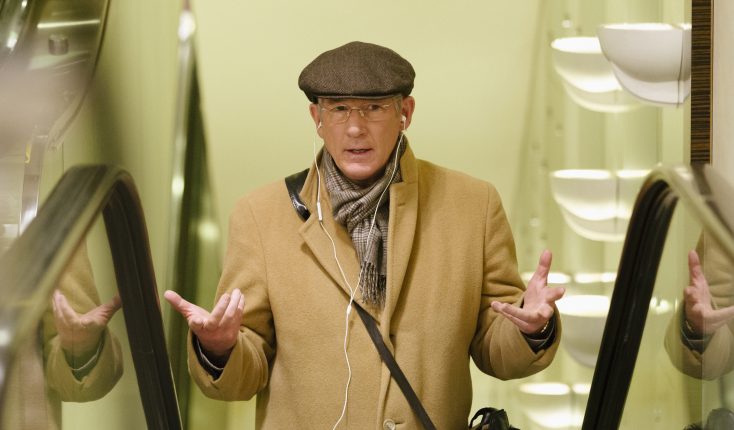 HOLLYWOOD—As he enters a suite at the storied Beverly Wilshire Hotel overlooking world-famous Rodeo Drive, actor Richard Gere is immediately questioned about whether he has a sense of déjà vu. After all, this was the setting for the 1990 Garry Marshall-directed fairy tale comedy about a workaholic businessman who falls in love with a charming prostitute, in which Gere co-starred with Julia Roberts.

“Everyone asks me that,”says the Golden Globe winning actor, flashing that familiar bright smile. “We shot most of that movie on a soundstage. The truth is, I don’t think I’ve ever even stayed here.”

At 67, Gere, with a shock of white hair and a few wrinkles around the eyes, has reached a point in his long career where he has moved beyond silver screen heartthrobs to playing more interesting, complex and usually flawed characters—and he’s completely fine with it.

In “Norman: The Moderate Rise and Tragic Fall of a New York Fixer,” the first English-language film from Israeli director Joseph Cedar (Academy Award nominated “Footnote”), Gere plays the title character, a New York “fixer,” who fancies himself a powerbroker, dreaming up financial schemes that never seem to pan out, despite his never-ending attempts to network and connect people. Undeterred, the nebbishy would-be financial titan sets his sights on Eshel, a charismatic but low-level Israeli bureaucrat (Israeli actor Lior Ashkenazi) visiting the Big Apple. Sensing the man’s vulnerability—as well as his potential—Norman wines and dines the man and offers to buy him a very expensive pair of shoes. Eshel remembers Norman’s act of kindness when he becomes Israel’s Prime Minister a few years later.

With his newfound connection to a world leader, Norman is, for the first time in his life, flooded with praise and admiration from those around him. He attempts to use Eshel’s name to leverage his biggest deal ever—a series of quid pro quo actions linking the Minster to his nephew (“The Queen’s” Michael Sheen), a rabbi (“Fargo’s” Steve Buscemi), a mogul (Harris Yulin), his assistant (“Downton Abbey’s” Dan Stevens”) and a treasury official from the Ivory Coast. Inevitably, Norman’s high stakes scheme begins crumble, creating a possible international catastrophe that only he can prevent, but at a high personal cost.

Q: What was it about this role that has attracted you this role?

Gere: As a piece of writing, it was brilliant. It had those qualities that are in the movie. It’s goofy. It’s smart. It’s political. It’s personal. It’s generous. It has a thriller aspect to it. All that stuff was in it and written beautifully. Joseph wasn’t bluffing it. He wrote the movie. It was a character that I didn’t know; someone I hadn’t played before. Although I’ve known Normans, I didn’t know this Norman, and it took a while to get into Joseph’s world that this Norman came out of. And then we had to find the specific Norman for the movie we were making.

It’s the leap you always make. You have an idea going into something of what it’s going to be, but you don’t really know until the actual people are involved and you’re really looking at it, moment by moment, and you ask the difficult questions that it fully becomes itself, that the flower opens up.

Gere: Of course, there are Normans everywhere.

Q: Was there one particular Norman that you knew?

Gere: No. I can’t say, “That’s the guy,” but certainly being in New York, for sure, being in show business, for sure, being around my world. Certainly, there are Normans on the edge of powerful, financially extraordinary, sexy; whatever that thing is. There are people on the edges that want to get in. The way they get in is by saying they can give you something. They can access you to someone you need or a thing you need or an upgrade to the room or the car or “the thing”, whatever it is. “I can get you a reservation.” Or “I know the maître d.” Whatever. It’s just a way to begin a relationship and make yourself needed. That’s ultimately what this Norman wants, what all Normans want and, ultimately, what we all want—to be needed and embraced.

Q: Did Joseph Cedar, the director, pursue you like a Norman, going everywhere, to get you to do the part?

Gere: No, he didn’t have to. No, just the synchronicity of how we met was kind of extraordinary. It was through our friend, mutual friend, (“Norman” producer) Oren Moverman, and it was at an event for new Academy (of Motion Pictures Arts and Sciences) members. My agent said, “Look, they really would love you to come. There are new members. They’d love to meet you,” and so I went. Oren and I hadn’t seen each other in a while. He had co-written one of my movies, “I’m Not There,” the Bob Dylan movie with Tom Hanks. We started talking. I was having trouble finishing a script, “Time Out of Mind.” I was trying to write of myself. Oren, from that conversation, did the rewrite and directed that film finally.

Q: That is a Norman kind of thing.

Gere: Yes, that’s true. But the difference was that it was extremely pure on Oren’s part. That was really a friend-to-friend gift with no expectation.

Q: Do you find that you’re more attracted to flawed characters these days?

Gere: Of course. The story of someone who is born a saint is really boring, but someone who was Barabbas and then became Jesus Christ, that’s a much more interesting story. I haven’t found the right words to express what I’m feeling. I call him a holy idiot sometimes because of how he has controlled his emotions. There’s a kind of almost mystical purity about him. Joseph keeps reminding me, “Norman wants his seven percent, for sure, but there is something about him,” like The Tramp (character) for Charlie Chaplin. There’s something that is extremely pure in the end about those kinds of characters.

Q: Is there some symbolic significance to Norman giving Eshel a pair of shoes? Shoes have certain connotation in some cultures.

Gere: That’s the key moment of the movie was that but then in rehearsal we pushed it further. It wasn’t just buying the shoes. I felt it was necessary to put the shoes on Eshel. That wasn’t initially there in the script. I was looking at it as the commitment from my character’s point of view. I have to put the shoes on his feet myself, and that’s what cements it. Joseph (the director) seeing it more from a narrative point of view.

Q:  Your character is playing with people’s emotions, trying to get what he wants, and then there are other points where we can see in his eyes when he’s being truly honest with a character and himself. How challenging is that for you as an actor to pull off?

Q: It was easy to believe you believing it.

Gere: Thanks. That was important.

Q: Norman could be perceived by the viewer as a very unlikable character, but yet we find ourselves rooting for him throughout.

Gere: That’s the Charlie Chaplin part, to me. In the end, he’s sweet. He’s not going to hurt anybody. There’s not a mean bone in his body at all. When he was confronted by Steve Buscemi (who plays Norman’s rabbi, whom he’s promised to make a large donation that he ultimately can’t fulfill) in the alley, and he asks, “Why did you do this? Why did you do this?” Norman can’t respond. I don’t remember if he actually said something in the script, but even that seemed like too much. It was just the fact of, “I am sorry. I didn’t want to hurt anybody.” That’s really where he’s coming from. None of his lies were meant to hurt anybody. He thinks all these schemes will come true. If everyone does what they’re supposed to do, everything is going to be fine.