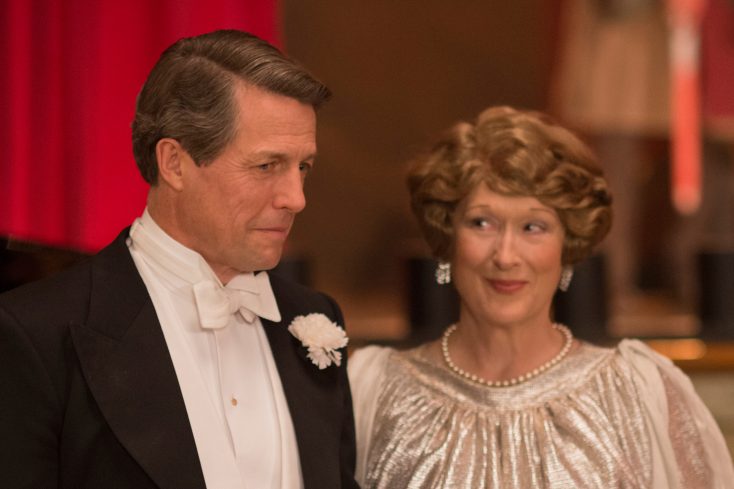 HOLLYWOOD—Three-time Oscar winner Meryl Streep (“The Iron Lady,” “Sophie’s Choice,” “Kramer vs. Kramer”) has a history of singing in film. From “Postcards from the Edge” to “A Prairie Home Companion,” from “Mamma Mia!” to “Into the Woods,” from “Ironweed” to “Ricki and the Flash,” the New Jersey native has showed her ability to tackle a variety of musical styles. Most of them time, she plays characters that sing well. In “Florence Foster Jenkins,” she plays a mid-20th century New York socialite who doesn’t.

Streep plays a woman who wants to be an opera singer even though she has marginal singing skills who, nonetheless, manages to win over listeners with her enthusiasm (and a little graft, courtesy of her enabling mate). The delicately balanced role that combines humor and pathos is likely to lead to more accolades for the fearless and versatile actress.

Having recently delivered an impassioned speech punctuated by a whoop of delight at the Democratic National Convention in praise of her longtime friend, Presidential candidate Hillary Clinton, Streep explained why she felt so emotional that night in showing her support. She also discussed being “the bad cop” at home and recalled her first standing ovation.

Q: When did you first hear of Florence Foster Jenkins?

Streep: In (Yale) drama school. I was in “A Midsummer Night’s Dream,” and people were passing around this cassette of her. We were performing it on the main stage, which was a big deal. They were playing the (Henry) Purcell music in the (orchestra) pit. Those students were from the Yale School of Music. During the lunch hour they were all in a gaggle, laughing and scratching and we (the show’s cast) were saying, “They’re such a dour group. What’s making them laugh?” So we went over and heard this singing, and it was her. If you talk to most music students or drama students, they know about her.

I’m going to drop a name now. I was at an art dinner with (artist) Jasper Johns about two weeks ago and he told me, “I’m so excited about your film, because when (fellow artist) Bob Rauschenberg and I were young, we had all of her records and when we felt low, we would put them on.” And I thought it was so dear. He also thought it was from another era. He’s in his 80s now and (Jenkins) died in ’44, so that was in the ‘50s. But he thought it was another era when they were young and cute.

Q: Having raised four children, do you think it’s alright to keep encouraging your kids at a sport or passion when you know they’re not good at it?

Streep: My kids are not good at something? (She laughs.) No, I just think if you have a child who loves something, here’s where it gets thorny. At three, my son (Henry Gummer) would go to the piano and try to play it. My husband (sculptor Don Gummer) plays the piano and I play a little bit from my two years of lessons when I was 12-13. So I said to my husband, “We have to give him music lessons.” He’s musical. So we got a teacher and it wasn’t a good teacher. If you don’t have a good teacher. When he started he was 8. And from 8-10, we had two different teachers. And neither one of them was very good. A great teacher is everything and a bad teacher can turn a kid off. So he lost interest. But I knew he had this desire; I knew it was living in him. But he wanted to quit taking lessons. So this is how it shakes down in my house: there’s (indicating herself) bad cop and then there’s dad. My husband would say to me, “You’re making him living this thing that’s your dream.” And I’d say, “No, it’s him. I know he wants to do it.” And he said let him quit so I let him quit. Cut to now, my son’s 35, and he’s a musician. Self-taught, late in life, he came to it. So I guess it’s OK. But I can’t help thinking if he had stayed with it… there’s a little bit of a tiger mom in me that said, “It’s a good thing.” Sometimes you have to (make your kids) do things they don’t want to do. It’s good for them.

Q: Do you read your reviews?

Streep: Back then I did. When you were in a play in New York City, there were three (theater) reviewers that really mattered: Clive Barnes, John Simon and Mel Gussow. There was a definite pecking order. You’d just get this terrible feeling, this terrible anxiety, and go buy the papers. It was so old school. You’d have to get the paper in the morning. It’s a nauseating feeling.

Q: May I ask you about your speech at the DNC? Your reaction to Hillary Clinton’s nomination seemed almost primal.

Streep: No control, yeah. I wrote that speech because I felt that thing. I know so many people don’t know about women’s history. We know about Benedict Arnold, the first traitor in the country but we don’t know whom the first woman was to really take a bullet. Someone who dressed in man’s clothes to serve. And then I thought about Hillary and all the **** she’s taken over the past 30 years; some of probably deserved, but most of it, her entire life of activism, from the time she took an extra year at Yale Law School to work at the Child Study Center to figure out how to identify rape in kids. Bill (Clinton) already was in love with her and wanted her to go with him to Arkansas and she (instead) went to South Carolina and set up a program. She was 25 years old and set up a whole program for disabled kids because people were hiding kids at home; they wouldn’t educate them. And she’s just never ever stopped. It’s like a hidden history.

My own history with her through Women in the World and Vital Voices and other programs—I’ve met so many other activists around the world that have said to me, “She saved my life.” Complete shadow diplomacy alongside being Secretary of State. That’s make an agenda and go to countries like Guatemala and she’d make a date with the President, but first she’d meet with women’s groups, women activists that were threatened. There was one member of the Guatemalan congress who had nine bodyguards—she was an anti-corruption advocate—so many people wanted to kill her in Guatemala. Hillary went there and met with her first. She went to her village and took a picture with her. I talked to her, Annabella De Leon, and she said, “(Hillary Clinton) saved my life. That made me too important to kill.” Nobody knows this stuff because (Hillary Clinton) is such a Methodist, she won’t take the credit. She hides her light under a bushel. She was taught not to show her good deeds and not defend herself. So that’s why I was so enthusiastic on (the DNC stage).

Q: “Florence Foster Jenkins” walks a fine line of showing your character as both a victim and not a victim. Was that challenging for you?

Streep: The script is really masterful in the way it walks that line. I’ve heard Stephen (Frears, the director) say that it could have really gone wrong, and he’s right. It could have bent to ridicule her. And she is ridiculous on so many levels. But it was a time when women, especially women of means, it wasn’t done to have a career. That’s what your husband did. Women like Florence would make their way in society by joining clubs. She was a member of 60 clubs in New York City. The men made the money and the (affluent) women did the good deeds. She inherited the money from her father. She really did underwrite Carnegie Hall. Toscanini did come begging all the time (for money). And she gave it away. I know people who are great patrons of the arts who secretly (in a whisper) would love to be on stage. Audiences are filled with them, especially at the opera. And the ballet is the same. I see ladies sitting there like this (admiringly looking up on stage). You know they had ballet training when they were younger and now they’re 66 years old and they just write those checks. And thank God they do because it’s the love of the thing, just the love of it. It’s not for any other reason.

So I found (Florence) touching, and I found her silly but we’re redeemed by whom we love and how we love and the quality of that. That’s the main thing; it’s not how good she sang. Or bad.

Q: Since you really can sing well, was it hard to sing off-key like Florence did?

Streep: It was interesting because it was so specific where she went wrong. I didn’t approach it that way. I learned the arias and tried to sing them as well as I could, which is not that good. (Opera singers) Renee Fleming and Audra McDonald are friends of mine. I know where I stand in that hierarchy. So I sang the arias as well as I could, and then I brought Florence in. Her voice was so specific. You could hear her (breathing) on the recordings. She’d almost make it and you’re sort of hoping for her. You’re kind of leaning forward. It’s not how bad she is; it’s almost how good she is, so I could relate to that.