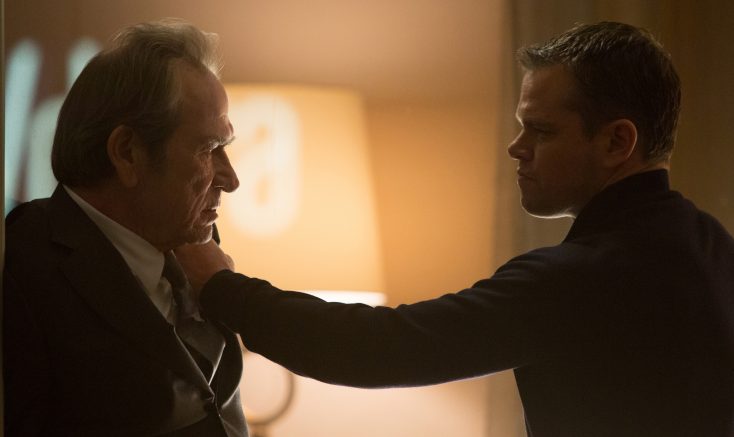 HOLLYWOOD—It’s been nine years since Matt Damon played spy-on-the-run Jason Bourne in “The Bourne Ultimatum.” Now the Oscar winner (for co-writing “Good Will Hunting”) is back, tearing up the town—actually three towns: Athens, London and Las Vegas—as he attempts to outrun a determined assassin sent by a corrupt CIA chief.

Though now a 45-year-old father of four, Damon demonstrates in this action-packed espionage thriller that he hasn’t lost a step as muscled action star over the past decade. (Jeremy Renner stepped in for a “Bourne” spinoff in 2012, but audiences failed to connect with that film and Renner’s character the way they did with Damon’s in three installments, the latter two directed by Paul Greengrass, who returns to helm this latest one.)

Damon spoke about reprising Bourne, who in this outing is having flashbacks to his father’s assassination, while hiding out in Southern Europe where he passes the time participating in illegal bare-knuckle brawls for money. Thanks to a heads up from an old friend (Julia Stiles, reprising her role of former spy Nicolette, who also is on the run), Bourne gets his hands on a flash drive containing classified CIA documents that a WikiLeaks-type hacker wants to release publicly. Bourne is only interested in specific data on the drive that provides clues to his past. What he discovers doesn’t sit well with him, and while the “asset” (Vincent Cassel) is hunting him down across Europe and the U.S., Bourne plots to take out both the hit man as well as Robert Dewey, his CIA master (Tommy Lee Jones).

Q: It’s been a while since you’ve played Jason Bourne. Is this the right time for a very relevant story?

Damon: Definitely. We always want these to feel like they’re ripped right from the headlines and one of the things we said a decade ago when we were doing the last one was “If enough time passes, maybe if 10 years goes by, the world will change enough and we’ll want to see Jason Bourne run through the new world,” and when we sat down in 2014 and looked at what was different from 2007, it was just mind-boggling how things had changed. The landscape is just completely different. 2007 was before the economic crash and before these social media companies became what they are. Just right on down the line, it really is a new world and the technology is changing so rapidly and changing us so rapidly that it made us feel like, “Okay, we’ve got a new world to run Jason through.”

Q: Jason is pretty much at the worst place we’ve ever seen him when the movie opens. What’s his state of mind and where has he been?

Damon: “The Bourne Ultimatum” has a really upbeat, happy ending. He kind of swims away and is liberated from his identity but we knew if we were going to do this movie we basically had to buy into the proposition that five minutes after he swam away, things started going horribly wrong and he can’t escape the things that he’s done. He’s haunted and tortured. So, we are assuming he’s had a pretty dark decade and he’s still on the run but he’s living on the margins and surviving and he’s running out of road.

Q: You spent almost two months in Las Vegas at the beginning of the year shooting on location. Can you talk about all they let you shoot on the strip?

Damon: I can’t believe they let us do that. When Paul (Greengrass) first pitched this idea to me that we were going to do this giant car chase on the strip I was like, “You’re from England. You don’t understand what that means. They’ll never shut it down. It would be like shutting down Times Square. It’s one of the most iconic boulevards in America.” But everyone in the city was great. They wanted it to happen and our producers, everybody worked together and we figured out a way to logistically get it done. The people were really patient with us. We were blocking up traffic for a month and a half or so at night. It was an all hands on deck effort.

Q: With the Jason Bourne character a part of your life for so long, what does it mean to you to come back to this?

Damon: When I think about this character, I’m just incredibly grateful. I’m really grateful that it came my way that Doug Liman (who directed “The Bourne Identity”), before anybody, just saw that I could do this. I had never done anything close to an action movie before “The Bourne Identity” and it was really Doug who believed in me and who decided to give me the chance and the impact on my career and on my life is really incalculable. The whole trajectory of my career changed when this role came into my life so I’m really grateful when I think about him.

Q: What has playing Jason Bourne in four films meant to you?

Damon: It’s been a defining role in my life and career. It’s enabled me to choose roles with reckless abandon because I always had the safety of a Bourne movie right around the corner so I could choose a lot of my roles without the considerations that actors sometimes have to make if you have to guess how the movie is going to do at the box office. Is it going to find an audience, all that kind of stuff and I’ve been kind of inoculated from that because of this role so it’s been a huge role for me on a whole number of levels so I’ve always been incredibly grateful to Doug Liman for giving me the part 16 years ago and I’m sure I’ll always be associated with this role no matter what else I do. To do something four separate times in your career, it’s going to follow you around but I don’t mind being followed around by Jason Bourne. I like Jason Bourne.

Q: You’ve worked with so many wonderful actors in this series. How do you think having these actors has contributed to the “Bourne” franchise?

Damon: The concept behind these movies is always to hire the very best actors in the world to do that whole B-side of the story. So, I’m marching around with purpose and they’re kind of narrating what I’m thinking as the story goes on. So, from Joan Allen to David Strathairn to Brian Cox to Chris Cooper, I mean just world-class actors and this time we’ve got Alicia Vikander and Tommy Lee Jones, two of the great actors in the world so that’s really, really exciting.

Damon: Alicia is great because she brings this whole element of youth to this story and Tommy Lee is just a legend. Essentially these stories are all about the prodigal son and of returning in rage and frustration and facing his father. If you look at the three movies I did, they kind of follow that narrative arc and this one’s similar in that it’s revealed that there is a deep connection between Tommy Lee’s character and mine. There’s a history there that shakes Bourne to his core and there’s a reckoning that needs to take place.

Q: Much of the film revolves around the secrecy involving classified data. What do you make of that?

Damon: This whole concept of cyber is the fourth arena of warfare basically and with what has happened with technology…and also it is very much in the public consciousness. Our civil liberties and to what extent people are keeping tabs on us and on our digital life so Bourne finds himself in this new world. Heather Lee (Vikander’s character) is an expert in that cyberworld and Bourne quickly finds himself in this new world and matched against somebody who has a skillset that he isn’t as familiar with.

Q: So you have three remarkable car chases in this film. What was it like shooting those big action sequences?

Damon: This is definitely on another level. In the last movie, “Bourne Ultimatum”, I remember standing in the middle of Sixth Avenue (in New York) because we shut down a couple of blocks of 6th Avenue and I remember thinking “This is totally insane”. Having lived in New York for a long time I’m going, “I’m standing in the middle of 6th Avenue at 10:30 in the morning,” and I just had that feeling the other night when I was down on Las Vegas Boulevard, just standing in the middle of Las Vegas Boulevard. It’s massive. I can’t wrap my brain around the scale of what we’re doing but hopefully that’s what people are going to want in the third act, something bigger than we’ve done.

Q: Without giving too much away, it comes down to you and Vincent Cassel going mano-a-mano. How did you prepare for that intense fight scene?

Damon: It’s got to be the mother of all fights. It’s ostensibly the last two guys and we’re very lucky to have Vincent (Cassel) because he actually a proper martial artist. It’s going to be a fight where both men are already injured. They are very highly trained but, at the same time, they’re both desperate. The choreography is awesome. We worked on it for a while and it’s a very punishing fight but I think it’s what the audience will want to see.

Q: How would you sum up the storyline of this film?

Damon: (The story is) about Bourne getting to the root of his identity essentially, of really understanding how he came to be Jason Bourne. It goes back into his past. He essentially gets all the answers to that original question of identity.