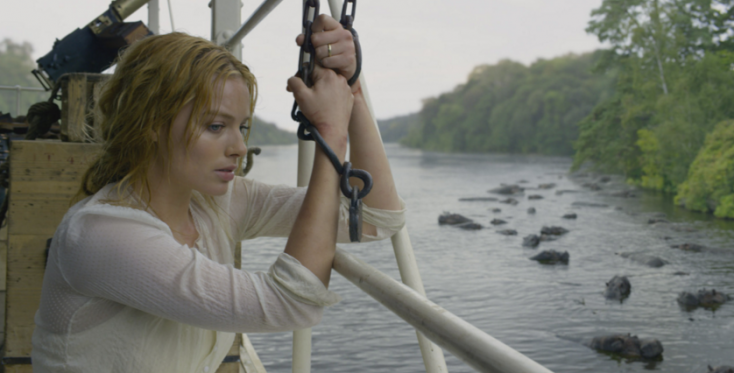 HOLLYWOOD—It takes a special kind of woman that can capture the heart of a man raised by gorillas. Jane, as played by rising star Margot Robbie in the live-action, effects-laden “The Legend of Tarzan,” is just such a woman.

Though Jane has been played by a multitude of actresses over the years in various adaptations of Edgar Rice Burroughs’ iconic work, Robbie brings a 21st century sensibility to Tarzan’s mate. She’s strong, self-reliant and fiercely protective of her husband. When they inevitably become separated by circumstances in this action adventure, she strives to reunite with him not because she seeks protection but because of her overwhelming desire to be with the man she loves.

Robbie, who turns 26 on July 2, first gained international attention playing another strong-willed leading character in “The Wolf of Wall Street.” In that, she played Leonardo DiCaprio’s gorgeous and brilliantly supportive wife. She subsequently appeared in “Focus,” alongside Will Smith, starring as his con artist protégé. Other credits include the recent “Whiskey Tango Foxtrot,” and Richard Curtis’ “About Time.” Robbie is set to appear in the upcoming fantasy adventure “Suicide Squad,” and Vaughn Stein’s noir thriller “Terminal,” which she also is producing.

Born in Australia, the stunning blue-eyed blond made her U.S., debut in 2011’s short-lived TV series “Pan Am.” Though the ABC series failed to connect with viewers, Robbie’s career soared.

In “The Legend of Tarzan,” directed by “Harry Potter” helmer David Yates, the jungle man (Alexander Skarsgard) has returned to England with his beautiful wife, but after years of living the carefree life of a lord at the carefully manicured Greystoke estate, the couple longs to return to Africa where they met and fell in love. An opportunity arises when John Clayton (Tarzan’s birth name) is invited to return to the Congo, where apes raised him after his parents’ murder, to serve as a trade emissary of Parliament. Little does he realize he is a pawn in a scheme concocted by the King of Belgium’s envoy, Leon Rom (a dastardly Christoph Waltz), to reap the natural resources of the region. Jane joins her husband on the mission, which turns out to be much more dangerous than she imagined. She has to use her own imagination and cunning to survive. She and John are aided by an American envoy named George Washington Williams (played by Samuel L. Jackson) investigating allegations of outlawed slavery in the region but they face a lethal tribe leader (Djimon Hounsou) who has a personal vendetta against Tarzan.

Q: There is a modern sensibility that goes into this tale set in the late 1800s. Jane isn’t a victim; she’s an empowered female. Was that important to you?

Robbie: Sure. I think it was important to make sure that a contemporary audience could relate to Jane. The book was written a very long time ago and I think ideologies have changed since then and David (Yates, the director) and I spoke right from the beginning about it. I agree that there is a love story at the core and I don’t think that being in love with your husband should be a weakness. I think that actually makes her stronger so I wanted that definitely to be the focus and though they are so dependent on each other and can’t live without each other, when they are apart, which they are for a lot of the movie, they are incredibly capable when they are alone. It just would be kind of boring just watching her sitting there waiting to be rescued.

It’s far more entertaining to watch her getting herself out of the predicament as well. So, it works on a character level and also on an entertainment level. I think it was important to make sure that she could be relatable to women watching. I don’t want them to sit there and think, “Oh, I wouldn’t do that. I would do this.” But, I hope women watching would be like, “Yeah, good on ya, girl!”

Q: It’s been more than 30 years since there was a successful live-action “Tarzan” movie. Alexander and Margot can you talk about your own relationship with Tarzan? Do you have a favorite “Tarzan” movie?

Robbie: I obviously kind of missed the earlier iterations of “Tarzan.” My version of “Tarzan” was the (1999) Disney animated version, which I loved. So, at no point was I like, “Oh, one day I’ll grow up and play Jane,” but that was my exposure to it. Again, when I read the script it just seemed very epic and flush and amazing and exciting and all these things but it is still a well-known story and one that involves a lot of elements that, in the wrong hands, could end up kind of cheesy.

When I heard that David Yates was going to be the one directing it, someone who took the Potter movies, which in the wrong hands could have ended up being cheesy or not relevant and gave it this cool, real but still such a magical feel, the realness in it, I thought this is exactly what this script needed. We needed that person to create this magical world with real relationships, real people and real scenarios in it. So, I was really confident to sign on.

Q: What was the most difficult thing for you to do in this movie as Jane?

Robbie: It was new to me to be reacting to things that weren’t physically there in front of me but we had the most incredible sets that I’ve ever seen in my life so everything was tangible like the jungle, those things were there but the animals sometimes weren’t and to get a grasp of the scale of these animals is mind-boggling. We’d have someone run out with a cardboard cutout of how big a wildebeest would be or a lion. I was like “Oh, I need to adjust my eye-line from here to way taller than me.” They’re huge and the same thing with the hippopotamuses and stuff. You can’t really comprehend what that situation would be like. So it was really bizarre kind of acting and trying to keep my reactions big enough.

Q: You have “Tarzan” coming out and also “Suicide Squad” on August 5, can you compare the women that you play in both? Did it affect you?

Robbie: Yes. They are on total different ends of the spectrum so it was kind of fun to go from one character to the other. I really can’t find any similarities between Harley Quinn and Jane at all but it was kind of interesting to play Jane who is so composed in the face of danger and very strong-willed and strong-spirited and emotionally strong and then play Harley who is a bit more of a basket case in most ways. It does end up affecting you because you ask yourself questions like, “What would my character do? What does my character think?” Ultimately, you are asking yourself those things as well. Every character I play makes me look at myself a little more so it’s interesting. But they are totally different. It was cool to explore one kind of person then the complete opposite.