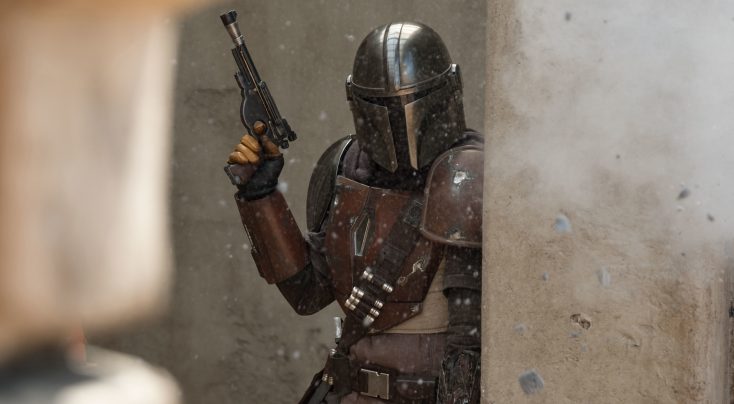 HOLLYWOOD—Hankering for “Star Wars,” but can’t wait until Dec. 20 for the theatrical release of “Star Wars: The Rise of Skywalker?” Subscribers to the new streaming service Disney+ can tune in Tuesday, Nov. 12 when the service goes live for the premiere of the new episodic TV series “The Mandalorian.”

As the titular character, Pascal possesses superior combat skills in his quest to capture his targets by any means necessary. Carano, as Cara Dune, is a former Rebel Shock Trooper-turned-mercenary who fought in the civil war on behalf of the Rebel Alliance. Weathers plays Greef Carga, the leader of a bounty hunter guild who hires the Mandalorian to track a valuable asset. Favreau along with three of the series’ stars were on hand for a sneak peek of the sci-fi series, which is one of several series launching on Disney+, which includes not only Disney, Pixar and Star Wars properties, but also National Geographic and Marvel titles as well.

Set in the “Star Wars” universe, “The Mandalorian” takes place five years after the fall of the Empire revealed in “Star Wars: Return of the Jedi,” and 25 years before the rise of the First Order depicted in “Star Wars: The Force Awakens.”

Q: This is the first live-action “Star Wars” television show. Can you talk about what is so appealing about that to you?

Favreau: As somebody who grew up with “Star Wars” and having an experience when I was little with the first film, there was an aesthetic to it that I really gravitated to. My whole taste in movies was probably formed in a big way from seeing George Lucas’s original film. I learned about cinema through the lens of that film. My father would explain to me, “This is a lot like samurai movies” or “This is a lot like Westerns or World War II films.” So, that became my inroad, and then there was a whole power of myth with Joseph Campbell and (cowboy artist) Bill Moyers that was filmed up at (Skywalker Ranch) and that opened me up to the mythic structure and my understanding of mythology and storytelling.

To come back to this with the freedom that this new platform affords (is rewarding) because there is nothing to compare it to. Nothing has been on TV other than the holiday special and the idea of telling a story over more than just a couple of hours told every few years. This opens us up to this novelization of story and to return back to the roots, in many ways, of the Saturday afternoon serial films that my parents’ generation grew up with—cliffhangers, adventure and drawing from that type of storytelling that lends itself really well to what we’re tackling here. Also, it’s fun not to have a preciousness in the way we are telling the stories because we’re coming back to you next week with another one.

The novelization of a serialized storytelling, to me, is where it really is opening up a lot of freedom and opportunity and where we don’t feel that we are repeating or copying anything else that people have experienced from “Star Wars.”

Q: When was the moment on set where you truly realized you were in the “Star Wars” universe?

Pascal: Putting the helmet on, for sure. It fit perfectly and I guess, very simply, trying the costume on for the first time and looking in the mirror. You can’t see very well through the helmet but I got a pretty clear impression.

Carano: For me, it was my first day on set and seeing the whole costume come together and Jon and Dave (Filoni, director/producer/showrunner) came and they made such a big deal out of it. They were like, “Oh my gosh, look how great you look,” and I was like, “Wow. This is really great,” but then I saw them tell that to everybody and I’m like, “Oh, you’re going to do that to everyone? Okay.” But, it really, honestly, was my favorite unforgettable moment being on set (and) seeing the other cast members—whether it be behind a helmet or a creature. Actually, my first day on set I was on a blerg. I was up on this big thing, and I was just like, “Okay. This is it. This is my life now.”

Weathers: Jon did sort of a slow roll on me. It was like, “Okay, I’ve got this thing that I want to talk to you about.” First of all, I’d (already) met Jon so we’d had a lot of interaction even though it wasn’t real personal stuff and I really admired him. I’m sincere about that. I really admired him because he is super, ridiculously smart about much more than just making movies. That was number one. So, I’m fascinated and I’m saying, “Those are the kind of people I want to be around so I can maybe grab something that he’s got that I really admire.”

When we finally got to meeting about it, you walk into that conference room and all of this art is on the walls and he is so passionate about it all and it is magnificent. It is some of the most beautiful artwork you could ever see if you are a collector. You want to go and take pieces off the wall because it’s that beautiful. Then he started telling me, basically, what this was and a little bit about this character. I was like “Are you kidding me? I’m working on something that Disney is going to be behind. I’m working with something that Jon Favreau is marshalling through and I’m working on a “Star Wars” kind of invention.” Then I get a chance to meet Dave Filoni, and I’m like, “We’re in good hands, really good hands.” So that was my introduction. and I’m happy to be a part of it.

Favreau: We roped him into the show a lot more than he agreed to and now, in season two, he’s a part of our director’s brigade. I know him through the Director’s Guild (DGA). We actually met there. I was, of course, a fan of his acting but he’s been doing more directing, lately so that’s been fun.

Q: Jon, you posted a picture of yourself and (“Star Wars” creator) George Lucas on set. Can you talk about what it was like for you that day?

Favreau: Carl was there that day. I think Gina was there. I know for sure Dave (Filoni) was there because I met Dave because I was up at the ranch mixing Iron Man and he was secretly working with George on “Clone Wars” before anybody had ever heard of it. I showed him Iron Man and he showed me “Clone Wars,” and I was like, “If you ever need a voice on this, I’d love to do it,” which turned into me playing a Mandalorian named Pre Vizsla on his show.

He had worked for George for 10 years. They had worked together so a lot about what’s wonderful working with Dave is that continuity of vision. I know George came by more to see him and was very proud that Dave was going on the next step because when George discovered Dave he was just an animator that he brought it. He thought it was a prank that his friends were pulling on him but when he met with him George said, “Do you want to run the show?”

So, it’s been a long relationship in understanding filmmaking, understanding “Star Wars” and now, as we get to live-action, to take the next step, I think that’s a big reason he was there. He wanted to make sure I was continuing Dave’s journey with him. I thought it was great and felt very special.

Q: Pedro, what is the percentage of you being in the costume versus a stunt double?

Pascal: Stunt doubles are essential to every large production, even for the strongest people. (He looks at Gina.). Nothing can get done without the incredible stunt work. You have no idea of the star power from every department that goes into making stuff like this. From the person working on the shine on my shoulder to the person who built the entire ship that we’re shooting in or the whole set. I’ve seen some pretty big shit and I’ve never seen anything like this. Yeah, there are stunt doubles, thank God.

Weathers: I do my own stunts. Never, in all my years have I had a stunt person do anything. (He laughs). Take that to the bank.

Carano: That’s neat. I did not want to see anyone else in this costume. I didn’t want to share at all.

Q: The “Star Wars” holiday special is where audiences saw their first Mandalorian. There is a lot of mention of that special. Can you explain why you wanted to connect those dots?

Favreau: There was definitely the gun, the pulse rifle. Here’s the thing: we’re starting with new characters, right? There was a lot of conjecture. Is it really going to reveal that it’s Boba Fett all along? A character we already know. We wanted to start fresh with a whole new set of characters that you never met before. What’s nice about that, it reminds me of when we were starting with Iron Man. For new fans, these were new characters, new actors and a new world. Even in the (Marvel Cinematic Universe), that version of it, was new.

So, it was a nice entry point for people who didn’t know anything about Marvel before and just wanted to see a movie and liked the actors who were in it. We assumed you didn’t know a thing and so we introduced you to everybody. By the same token, the foundation of all of this genre are the fans that have been there since the beginning and the people who grew up with [Star Wars] so how do you balance those two things?   I think most of the time with superhero movies there was the notion, going back decades, that fans will be there anyway. Just make it as approachable and as accessible as you can to the general audience.

But, I think that’s changed a lot. I think that (Marvel Studios president) Kevin Feige and (Marvel chairman and CEO) Avi Arad and all the people who started off with the MCU, smartly realized that no, those are your fans. That’s who has been there all along and you build out from the grass roots. So, never lose touch with the people who have put in the time and who’ve cared. So, there are ways that even though we have new characters and you can jump in with chapter one, we wanted to make sure that if you are watching and you knew about it, we tried to work things in whether it’s humorous like making a reference to Life Day or a reference to a prop that has been appreciated by a core group over time, just putting those little Easter eggs in, or big movements in the story that reflect storylines in either the legends or in canon that people have known.