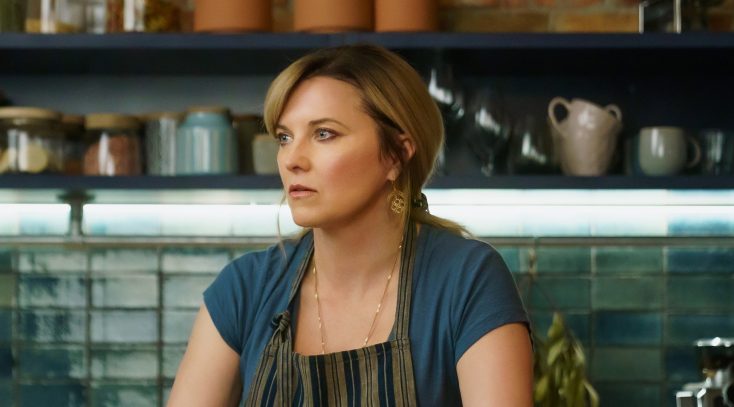 Back in her home country of New Zealand, Alexa can’t resist the urge to investigate murders.The detective is joined by her tech-savvy partner, Madison Feliciano (Ebony Vagulans), who flies in from Australia and, to Alexa’s dismay, moves into her apartment to help her solve crimes. In episode 10, Alexa becomes engaged in the murder of a self-help guru, and finds herself in a dangerous game of wits with the victim’s wife (Renee O’Connor.)

Lawless spoke with the members of the TV Critics Association via Zoom about the new season, which premieres on Acorn TV Monday, Aug. 30. Acorn is North America’s largest streaming service specializing in British and international television.

Q: The British have taught us that mysteries and murders always happen in dark, gloomy places. Your show is maybe the brightest-looking show on TV.

Lawless: We do pump up the colors because that’s part of our agreement with the audience—that they’ll come for something bright and, at the end of the hour, they will feel good. So, it’s the very similitude of justice and a lovely little pseudo-family that you want to spend time with.  It was something that I did because I’ve done a lot of dark stuff in my career and I was a little bit tired of it. I thought, nobody might show up at our party, but let’s go make it anyway and it’s turned out great. And guess what? Murder does happen in bright places, too.

Q: Why did you change the location for Season 2 from Australia to Auckland, New Zealand?

Lawless: I was very worried about that, actually, because you’ve got a whole new crew, new writing staff apart from the head writer. But it turned out great, tonally, because we got Ebony over to New Zealand, which was no mean feat. That’s the heart of the show, so it worked out (beautifully). Actually, it translates very well. It’s a new city, and the city’s a character in our show. I’m really happy to welcome people to my hometown.

Q: Was it a problem explaining in the scripts why the action moved?  Was that a dramatic issue, or did you just figure the characters have decided they want to get as far away from COVID as they can?

Lawless: No, COVID is never mentioned. (My character) goes back to her roots because she’s got a troublesome family member to deal with and it unfolds seamlessly. It’s very much in keeping with what I call the agreement with the (audience). You’re not gonna be disappointed. I’m delighted to be able to say that.

Q: Was there any thought to making Alexa’s character darker in any way?

Lawless: In the ‘90s and 2000s, the heroes would have quite a big, dark (backstory) and I think that’s changed a little. We didn’t actually want to have that in the show. But (Alexa) did lose her husband, so there is still that. You’ve got to have that raw edge that makes her a little bit of a fortress, a tough nut to crack because she’s hurting somewhere.

Q: Can you talk about the relationship between Alexa and Madison?

Lawless: Ebony Vagulans was the last person to come in for the role, and she just blew everybody else out of the water. I said, “It has to be her.” And everybody all the way up the line up to Acorn said, “Yeah, it has to be her.” What a discovery.

Q: What was it about her that you loved?

Lawless: This girl is so talented, so intelligent. I just knew she was somebody I could be chained to night and day for four months and not want to kill her. She’s just magical. I will confess, too, I actually need her. As an actress, as a human being, I feel much better when Ebony is around. It’s just a beautiful, organic pairing, much like Renée in our “Xena” days.  The magic is in the duo.

Q: Did you know right away when you met Ebony you would have such a great rapport?

Lawless: Yeah. This young woman was a force and a star. I like the handoff. I’d prefer not to be in every single scene. She can carry the story. I’m all for it.

Q: You have been in a lot of physically intense shows like “Xena,” “Spartacus” and “Evil Dead.”  Has it been a lovely relief to do this show?

Lawless: Oh, yes. I always hated action, just twixt us. I don’t do fantasy.  I don’t watch fantasy.  I’m not interested in any of this stuff, but I found myself in this crazy genre. So yes, I love being away from it. Our agreement with the audience (is) that there’s very little action. I don’t love action, (but) we do a little bit.

Q: Do you think after the year we’ve been through the audience just wants to dig in and watch a murder mystery?

Lawless: Oh my God! They’re loving it. Because you wrap it up. It’s giving people a sense of justice. The world’s been so unjust for the last six years and people are hungry for it.