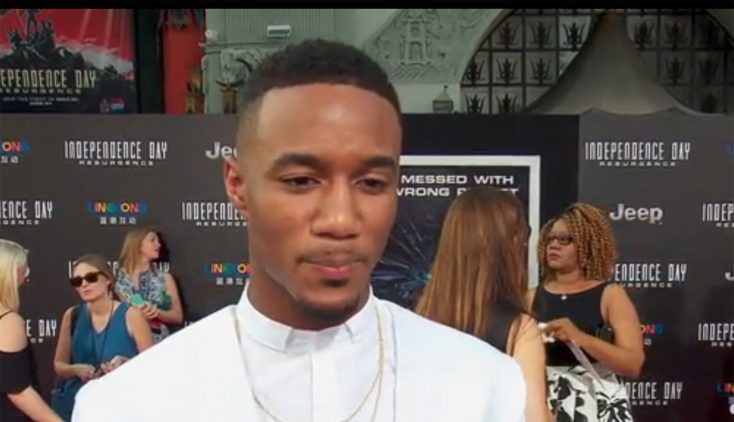 ALBUQUERQUE, N.M.—“Independence Day: Resurgence” rising star Jessie T. Usher, after a stellar academic career, made his mark on entertainment with television roles in “Survivor’s Remorse” and “Level Up” before starring in the family feature film “When the Game Stands Tall.” The 24-year-old actor admits that the chance to play Dylan Hiller, fighter pilot stepson of his idol Will Smith’s Earth-saving Captain Steven Hiller from the 1996 original “Independence Day” film just blew him away.

Usher recently spoke about how he met and was congratulated by Will Smith when he landed the role, that the hero he would most like to live up to is his dad, that “It is very likely” that aliens are really out there somewhere and what famous sports figure he would like to play in a film.

Q: Last summer about this time, you hadn’t met or spoken to your career idol Will Smith. Has that changed? Have you met him?

Usher: I have. I met him at the Washington Correspondents’ Dinner. I walked up and said, “How you doin’ Will Smith, I’m Jessie T. Usher,” and he said, “I know who you are,” and I almost lost my mind right there. He’s the man, and he congratulated me on the role and told me he’d known for a while that I was going to be playing Dylan and gave me a lot of encouraging words and said how happy he was. Jada (Pinkett Smith, his wife) was there as well and congratulated me. We work with a lot of the same representation. My business manager worked with Will 20 years ago when he did the first “Independence Day,” so small world.

Q: When we were on set in Albuquerque last summer I was really impressed with the full-sized alien-hybrid fighter ship on the stage. As an actor were you happy to work with practical props like that rather than all green-screen stuff?

Usher: Absolutely. Honestly, it’s always good to have something that you can feel and see and that works. You can really get into the character. Don’t get me wrong. I loved the blue screen work that we did and the effects work and that kind of stuff because we get to almost do what we want. It’s like being a kid on the playground again. But, at some point, you want something to re-ground you. I was very happy that they spent the time and money to make that Moon Base and especially the plane I was flying feel like what it was like and sit inside of it and see that the controls work. It helped a lot.

Q: Did you do any training on how to operate a fighter in the cockpit or just wing it?

Usher: I had a run-through when I got into the plane because it was modeled after I believe an F-16 and they told me what the levers are and that kind of stuff. There’s a lot there in the film I wouldn’t have to worry about. They had a lot of military specialists there and a pilot came in and said, “This is how you would take off. This is what you would be doing,” because, on camera, they don’t want you to be like staring forward and looking crazy. (He laughs.) You’re going to be checking things and making sure everything is a go.

Q: So is the relationship between Patricia (Maika Monroe), Jake (Liam Hemsworth) and your character, Dylan, really a love triangle that plays out in the film?

Usher: Patricia, growing up, her dad (played by Bill Pullman) and my dad (Will Smith) basically saved the world with David Levinson (Jeff Goldblum) so we were bound to grow up together and be friends but she falls in love with the Liam Hemsworth’s character Jake, and I’m the guy that will always be protecting her. With the fact that she and I were so close, he wanted my position at the Earth Space Defense. I was the captain and would lead the Legacy Squad and if he led the squadron, maybe she would feel the same way toward him. It caused a bit of a rivalry but ends up okay. He’s the man she loves but I’m her best friend.

Q: How was working with Liam?

Usher: We had quite a bit together. At the beginning of the film, he’s sort of on punishment where he’s not allowed to fly because of mistakes he’s made but when things get bad we have to call in everybody that we have and we bring him in. He’s a great pilot. He’s a great actor. He brings a lot to the table and he’s fun to work with. He keeps it light. He’s very chill. It was nice to have him around.

Q: What impressed you about working with Roland Emmerich as your director? He has this huge imagination.

Usher: Roland is a genius. He’s a mastermind. I couldn’t even imagine what it was like for him to really wrap his head around doing a project like this with so much going on all the time. It was incredible to watch him work. He would take the action and make it real for the actors, to create this universe, the world around us basically just from an image in his head that he is able to portray to everybody else and then pay attention to the most fine details. It was incredible and he knew specifically what he wanted from beginning to end. He just had it together. Sometimes you run into directors who will say, “Well, if you don’t know, I don’t know,” but that’s not him.

Q: What was the most exciting scene for you to shoot and the hardest scene?

Usher: The most exciting and hardest to shoot was this whole sequence where Liam and I were waist-deep in like a big tub of water and there is a whole lot going on there. It was physically rough but it was a lot of fun. We got our chance to do things that I never thought I’d be able to do. I’ve never shot underwater before. I never got a chance to really let loose and rip and run in a pool with all these effects and action sequences in there. It was very complex and specific but we were able to let loose and have a blast too. I was very happy with the way it turned out too.

Q: Do you believe we are alone in the universe or that “they,” whether good or bad, are out there somewhere?

Usher: I think so. I couldn’t put a face or personality on it but I think there is some type of life form that exists outside of Earth. From what I’ve heard, we haven’t had any contact or real communication but scientists have dedicated their lives in the belief that it is very likely. I agree with them. I think it’s very likely.

Q: Like your character Dylan, have you ever had a hero in your life that you felt you needed to live up to?

Usher: My dad is an incredible human being. He’s done a lot for my family and has always been there. He put me in a position to do what I do. I can only hope to continue to live my life and do as many great things for my future children as he has done for me.

Q: So you’ve got “Almost Christmas” coming out soon. Who do you play in that?

Usher: That film is about a huge family. I’m the “accident” child that comes along a lot later so all of my siblings are about 20 years older than me. This is the first Christmas that everybody is coming back to our parents’ house after our mother has passed. We’re having to deal with that. It’s a great cast. It has the vibe and energy of the movie Soul Food. It’s something different for me.

Q: Is there a person in history that you would love to play some day?

Usher: Yes, actually. I would love to play Arthur Ashe (legendary African-American professional world tennis champion). Nobody’s done that. I’ve heard a lot about it happening on and off throughout the last maybe ten years or so. I would love to play people who have left that kind of impact on people’s lives and I think playing that role would be huge and that would be a great project.

Q: I’d go see that for sure. What do you think audiences, particularly young people, will especially get out of seeing “Independence Day: Resurgence?”

Usher: There’s a huge spectacle draw in this film, the technology used in this is top notch and it is not like watching a video game. It’s almost like you are watching this happen in real life. Roland made sure of that. It’s thrilling and exciting and massive but the relationships are small and specific. We were very particular about building the relationships between people throughout the world. The world is united in a way that we can only imagine. I’m excited for everybody to see it, especially the teenage generation.