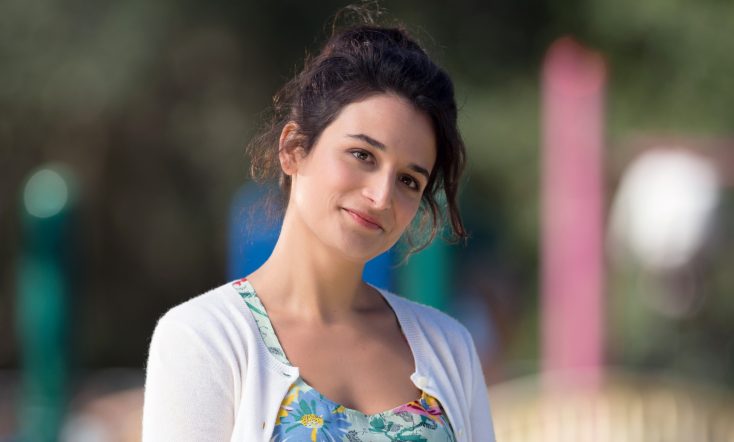 HOLLYWOOD—Jenny Slate knew she wanted to be an actress from a young age. The Milton, Mass., native looked up to quirky stars including Ruth Gordon and Madeline Kahn. One of her favorites, though, was comedian Gilda Radner, whom she watched on reruns of “Saturday Night Live.”

“My father was like, ‘That’s what you can do, because you like joy, and this woman is powered by joy,’” Slate recalls fondly. “But it was always up to me find my own path.”

Slate’s path has taken her down a varied and mostly fun-filled road. Like her icon Radner, Slate became a cast member on “SNL,” most notably dropping an accidental F-bomb during a sketch in 2009.

She has since moved on to guest starring in numerous TV sitcoms including “Parks and Recreation,” “Brooklyn Nine-Nine,” and FX’s “Married” as well as voicing characters for animated kids’ programs including “Adventure Time” and “Star vs. Forces of Evil.” She’s also the co-creator of the popular online web series “Marcel the Shell with Shoes On,” and a children’s book series.  On the big screen, she starred in the cult favorite “Obvious Child,” an abortion-themed romantic comedy.

The 35-year-old was reportedly in a romantic relationship with “Captain America” star Chris Evans up until earlier this year, and although the couple has broken up, Slate has nothing but praise for her “Gifted” co-star.

Dressed in a lovely spring dress, the amiable actress spoke about the Marc Webb-directed film, which tells the tale about Mary Adler (Mckenna Grace), a seven-year-old living with her uncle in rural Florida. When she enrolls in public school, her teacher, Bonnie Stevenson (Slate) discovers the child has an extraordinary aptitude for math problems. She suggests the child enroll in a school for the gifted but her guardian, Frank Adler (Evans) is reluctant because he wants the girl to enjoy a normal life. Matters heat up when the girl’s maternal grandmother (Lindsay Duncan) launches a custody battle over the child in hopes of sending her to a special school. Bonnie and Frank’s next door neighbor Roberta Taylor (two-time Oscar nominee Octavia Spencer) side with Frank to retain custody of the little girl.

Q: You had a great wardrobe in this film.

Slate: I picked out most of the clothes myself. Remember that show “Rock Center with Brian Williams?” He came to my apartment in Brooklyn to interview me for “Marcel the Shell with Shoes On,” a short film I put on the Internet. If you haven’t seen it yet, you should because it’ll make you happy. I do the voice for it and my ex-husband animates it. Anyhow, Brian Williams came to my house and we were there just talking. For some reason, I said, “I have so many party dresses,” and I ended up opening my closet and showed him my party dresses. It was so bizarre. I remember him standing there and I had baked him cookies. He had brought his daughter, Allison, because she was a fan of “Marcel the Shell.” I was like, “This was my grandmother’s. It’s Chanel. This was my aunt Eunice’s. …” I also thought, “This is not traditional!”

Q: When are you starting your own line of clothing?

Q: How did you like playing a teacher in “Gifted?”

Slate: I really liked it. I like being an actress because I sort of like being obedient. As a child, I was so frenetic. Because it was hard for me to pay attention, I never really felt proud of that part of myself. So being an actress, where someone is like, “Stand here,” I feel like I can follow directions. Playing a teacher is a chance for me to kind of replay the memories of good teachers that I’ve had but also to create an adult who is gentle but firm, and just curious—kind of a dream adult. Someone who is in control maybe more than I am as a creative person.

Q: How was it working with the kids in your class?

Slate: It was different from making a movie in L.A., where the kids are actors. Mckenna is a professional actor and she was doing her thing but the rest of them were children from Savannah (where the film was shot). They were aware we were making a movie but they also were children; they don’t do this professionally every day. They have respect for things like freedom, snacks and adults who are nice. In between takes, our director Mark was like, “Don’t stop. Don’t let them see you as Jenny. You are the teacher,” so I was the teacher all day long. In between takes, I remember doing things that I remember my dad doing with me when we were in the car. He would quiz my sisters and I. And it was really fun because the answers were kind of easy for the kids but they got into the energy of learning. They do start to see you as somebody they need to listen to. After a while, I was like, “These kids don’t know that I’m actually just a clown.”

Q: What did you think of the chemistry between Chris Evans and Mckenna Grace in this film?

Slate: It’s darling. It really is. Mckenna is a young creature on this earth but she is, for sure, made to do this. This same for Chris. He’s been a performer since he was little. He was younger than I was when he got to it but he had been in school plays forever so I think you can see that energy between them. They have a real synergy as actors, even though one is so big and one is so little. They’re a really good match.

Q: What surprised you most about Chris?

Slate: One of the most beautiful things about making this film, and we all talked about it on set, was Marc Webb, our director, managed to gather a group of actors who are all really in love with performance. That was a really wonderful thing to see in Chris. He’s dedicated to it and he’s so in control of his skill set. And he’s dedicated without fetishizing the art of performance. He just does it. I learned a lot from being on this movie because everyone else was a more seasoned performer than me. I felt very green. There were moments when I felt, “Oh, I’m the new one,” but I had to accept that and realize there were a lot of opportunities to learn.

Q: Who did you learn from?

Slate: One thing that sticks in my mind was something that Marc said to me: “You always do 70 percent of what you’re asked to do and 30 percent of what you want to do.” I took it as a compliment but it’s something I have to keep my eye on because in my nature I am wild but I want to be part of a community. I want to be in my family without being sent to my room even though I’m 35. I want to be on this film and be fully creative without being indulgent. What he said really rang true to me as a person and who I am as an artist. But a do take it as a compliment—that there is a part of me that will always have my own True North, and that’s what makes me unique as a performer. I’m proud of it but you can’t just do what you want all the time so it was a very interesting thing to hear—one that I’m both proud of and also something I’ll be sensitive to.

Q: You and Chris played your characters’ relationship pretty low key. Was that intentional?

Slate: Yes, I thought it was important to endow this woman with a wholeness, with a steady energy and with a humble sense of purpose. I don’t think Bonnie sees herself as someone who has discovered a gem. She’s not looking to gain from this. She sees herself as a facilitator. Once she gets to know Frank, she sees herself as someone who can nudge both of them towards a good life and yet she’s really aware of overstepping her boundaries, and sometimes she does. She knows she might lose him as someone to be romantic with but in the end, it’s very important to set this child and to set this man, who’s also vulnerable in a different way.

Q: Did you spend a lot of time with Chris preparing for this role?

Slate: We spent a lot of time together as a group. There were a lot of game nights and there weren’t that many people on this film but our characters don’t really know each other that well, at least initially, so I felt pretty enclosed as far as getting to know these people in order to make the work better. But I truly loved hanging out with them. I’ve had a few film experiences like this where it felt like I was at camp.

Q: Were you a gifted child? Did you attend an arts program?

Slate: I attended private school in Milton, Mass., where I’m from. I went there from kindergarten through high school. It was a small school and academics were very competitive. I was a violinist but I wasn’t considered “gifted.” I mostly played the violin because I wanted to wear a long velvet skirt and hold the violin. (She laughs.) Just like I love wearing a horseback riding outfit but I’m terrified of horses. Though I think of myself as a powerful and intelligent person, it was up to me to figure out what my special powers were.

Slate: I still do a lot of standup as a way to refresh my imagination and connect to people. I’m about to go do a film in Vancouver. I’ve just written a book with my father called “About the House.” We wrote it for the Concord Free Press, which gives away the books for free as long as you donate to the non-profit of your choice. People ask me where I want them to donate to and I always tell them I want them to donate to Planned Parenthood but you can donate the money anywhere. It’s important, especially right now, when the (Trump) Administration is trying to kill every arts program in the country. It’s important to remind people that art isn’t just for entertainment but it also inspires generosity and connection. My father and I wrote about the house that I grew up in with my family.

Q: How has being the middle child informed you?

Slate: I crave attention. It’s been part of my life’s work as an adult to satisfy that need without being totally gross so that’s why I do standup. Both of my sisters have professions in healthcare. What we have in common is that our parents told us the way you want to be in this world no matter what you want to do is to have an emotional intelligence and a real intelligence and that learning is something you are going to be doing until you’re not here anymore. Though they quieter and more reserved than I am, they are really loving and that’s what we have in common. But I’m a talker, and I’m a few inches taller than both of them.