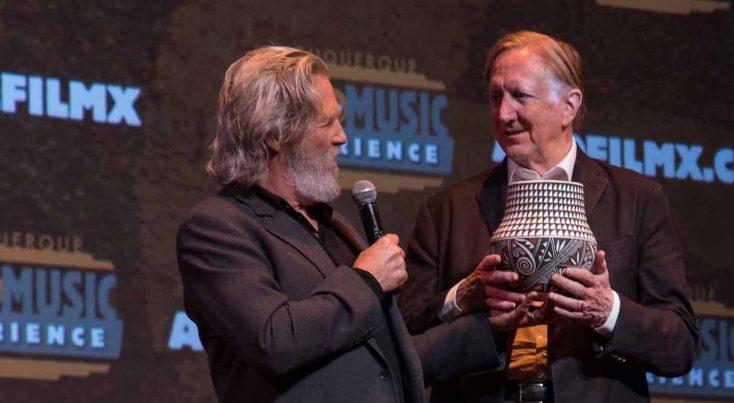 Albuquerque, N.M.—Oscar winner Jeff Bridges and his pal of 40 years, Oscar and Grammy award winning producer, composer and musician T-Bone Burnett, believe in the fusion of music and film. At the Albuquerque Film & Music Experience, the duo told a packed house that they are always trying to find an excuse to work together.

From a collaboration on “Heaven’s Gate” to the 1998 cult classic “The Big Lebowski” through 2009’s “Crazy Heart,” which won Bridges the best actor Oscar for his portrayal of Bad Blake, a faded country music musician, and Burnett won for co-writing “The Weary Kind,” with Ryan Bingham, Bridges and Burnett have brought out the best in each other. Bridges presented Burnett with the AFME 2017 music award.

It was Burnett who reassured Bridges when he was concerned he couldn’t do the “Crazy Heart” songs justice.

“I ended up just crying but it’s part of the adventure,” recalls the actor.

“He was totally cool about it,” Burnett retorts, prompted Bridges to start laughing.

Both creative dynamos admit to loving any job that will take them to New Mexico.

Q: Jeff, you’ve made at least six movies in New Mexico. You must like it here.

Bridges: This has got to be my favorite place. The light and the land but the people, the crews you get here are just top-notch. The movies I’ve made here I’m so proud of and I’ve had some great times making movies here. Personally, I prefer shooting in a real location as opposed to a studio set. You just get the vibe going and that kind of adorns the work.

Q: T-Bone, as a music producer can you describe how you work with actors who have to sing versus musicians? Is it hard for some?

Burnett: (I was told) that there are so few actors who are good singers and singers who are good actors because they are such different practices; the singer projects his personality into the room and the actor submerges his personality and projects another personality. What I’ve found is with singer/musicians is you just tell them to sing louder or softer. With actor/singers, you tend to give them adjustments like, “Sing this as if you have a hangover’ or ‘Sing this like you’re singing your baby to sleep.”

That’s what I did when we were doing “Walk the Line.” Reese Witherspoon (who played singer June Carter Cash) was having trouble getting “Wildwood Flower,” which is seminal song of country music, and she was nervous. Suddenly, Reese was out in the backyard and she let out this blood-curdling scream and all the birds flew away. It was terrifying but I thought, “She sounds ready.” I told her, “I’ll play guitar and you just sing it like you are singing it for Ava,” her little girl, and we did that in one take, and that’s the track that’s in the movie.

Q: Jeff, how did music come into your life?

Bridges. I was born into kind of a musical family. My mother played the piano and she gave us piano lessons and I’m upset with myself that I bitched about it. My dad (actor Lloyd Bridges) had a success with (the 1960s TV series) “Sea Hunt.” It was great for his career but it was tough for him because he was also a Shakespearean actor and (music-wise), he replaced Richard Kiley as “Man of La Mancha” on Broadway, so he had musical chops.

All that early rock ‘n roll music was coming out of my big brother Beau’s door and it was great— Chuck Berry, Little Richard, Buddy Holly, all those guys. So, I picked up a guitar around 12 years old. You get your friends playing with you. Nothing like jamming with your buddies. Then “The Fabulous Baker Boys” came along where I got to play piano. I learned the bars of music for when the camera was on my hands and took some piano lessons to do that. They deadened the keys on my piano anyway. It’s all an illusion.

Bridges: I turned down “Crazy Heart” for a couple of years because there was no music. The movie is not going to be good if the music’s no good. I ran into T-Bone who said, “I’ll do it if you’ll do it.” He thought the music was the easy part. We were creating an alternate country/western universe. It was scary but after that I got kind of hooked on the music thing and said, “Gee, if I’m ever going to realize my music, now is the time to do it.” So, I called up T-Bone and said, “Hey, do you want to make an album? I’ve got some tunes.” And he said, “Yeah.”

Q: Jeff, do you wish there were more indie films like “Crazy Heart?”

Bridges: Yeah. You have these huge tent pole movies and the financiers think it’s a safe bet to put all their money in making that movie rather than making thirty ten-million dollar movies. It’s show business, the business part of it. But, each movie is such a different deal. It’s like you are playing a different card game with different players.

Q: What do you think about producing your own stuff? Good or bad?

Bridges: Do it yourself. That’s wonderful. When young actors ask advice I say, “Pull a ‘Rocky,’” ‘Pull a Stallone.’” Write your own stuff. You can shoot it on a phone or something. “Tangerine” was shot on an iPhone. Or a few years ago it was (John Carney’s music-filled) “Once,” shot for a 100 grand or something. That gave me such satisfaction, more than that special effects stuff. Doing it yourself is really important.

Burnett: The trouble with narcissism, though, is everywhere you look, you’re not there.

Q: T-Bone, how do you feel about music today?

Burnett: We’ve recorded the poorest people in our country in the last century and we’ve spread the best of our culture all around the world, every color, everything. I want us all to take responsibility for what we can do in music and do it all again.

Q: Bring on the new and preserve the old?

Burnett: We all have a common foe and that’s forgetfulness. One of our political figures asked why we fought the Civil War. We can’t forget. If you live a nonexistent past, a bleak present and a frightening future, then you’re in a dark age. We, as artists, have to beat that dark age back and not forget what was good.