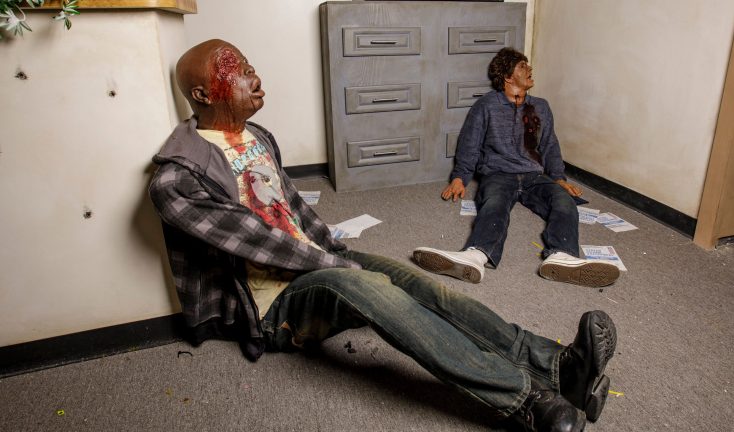 Blum was emerging as a major Hollywood genre producer with hit films including “Paranormal Activity” and “Insidious.” Murdy was collaborating at the time with the musician/filmmaker on creating spooky Halloween experiences for the theme park based on his horror films.

“I noticed Jason was looking at his phone a lot and realized the ‘Insidious” sequel had just come out and he was checking out what was going on at the box office to see if the it would be a hit and, of course, it was,” recalls Murdy as he leads me on a daytime tour through one of the mazes that will be open to visitors this Halloween season.

During their fateful first meeting, Blum and Murdy got to talking about collaborating on some of his movie titles for future Horror Nights productions. Hence began a long and enduring partnership in which Murdy and his team of artists, actors and construction crews have brought some of Blum’s scariest films to life to the delight of tens of thousands of visitors to the Southern California theme park and movie studio as part of its annual Halloween celebration.

Blum says he feels his properties are in good hands because Murdy is also a horror fan as well as a visionary designer.

“He loves horror, which is really important,” he says. “He loves horror movies, not just our movies. John is able to look at our movies through the eyes of a fan. He obviously cares about what he’s doing so the mazes, all the way through, feel very authentic. They feel really connected to the movies. You feel like he really picks the right moments. He’s incredibly invested in this event, and that shows in every decision he makes. I admire all that he’s done. We’ve never had a bad experience with him, which is saying a lot because I’ve had a lot of bad experiences, but not with him.”

The “Insidious” films were some of the first Blumhouse films recreated into three-dimensional mazes that visitors could walk through and re-live the chills and thrills of the films set to music, sound effects and live performers recreating scenes.

This year, Universal Studios Halloween Horror Nights boasts eight mazes, “scare zones” and a fully re-imagined “Terror Tram” experience—uniquely themed to today’s most definitive horror properties. Two of the mazes are devoted to Blum’s Blumhouse Productions films. One incorporates Blumhouse’s “Truth or Dare,” “Unfriended” and a finale that is based on the creepy opening logo sequence of his film company. The other Blumhouse maze is based on the recent hit prequel “The First Purge.”

This highly anticipated Southern California annual event runs Sept. 14-Nov. 1 from 7 p.m. to 2 a.m., and is designed to taunt, terrorize and torment guests as they navigate the darkness from one frightening maze to another. Tickets can be purchased at Hollywood.Halloweenhorrornights.com. There are various ticket options and visitors are urged to purchase early as this event tends to sell out.

“John has been our partner since we started,” says Blum, sitting in a dimly lit electrical building near “The First Purge” maze. “Over the years, I’ve come to completely trust him.”

Trust is key in that Blum shows scripts of his upcoming films to Murdy just as they’ve gone into production—sometimes even before—and Murdy is free to choose what he thinks is going to work best.

“John picks the set pieces from the movies that he thinks are going to make the best scares, and I trust him,” says Blum. “Mostly, I get the pleasure of showing him everything and then coming here and seeing what he’s done. He’s 100 percent in charge of the creative and what goes in.”

Sometimes, Murdy even includes scenes in his Halloween creations that did not end up in the movie. For example, there’s a room in the Staten Island-set “The First Purge” maze that depicts a scene set in a department store with numerous mannequins with creepily painted faces. That scene got cut from the film. Another room in the maze shows a swing creaking in the wind, when the villainous Skeletor character from the film appears just in time to scare the wits out of visitors. In the Horrors of Blumhouse maze, Murdy has created a scene involving the mysterious girl seen in the production company’s logo that appears at the beginning of all its films. He presented to Blum his origins idea for the spooky girl, and whether she was a demon or not, and he liked it. (We won’t spoil the surprise here.)

“I’m very flattered by that; it’s my favorite one,” Blum says. “But I’m also proud of ‘The Purge’ (property) and all the shapes it has taken. We made the first movie five years ago, before the other movies and the (upcoming) TV show. It’s been a scare zone and it’s been a maze. It’s very suited to a scary live experience, so I love that too.”

Murdy says he begins thinking of ideas for Halloween Horror Nights a year ahead of time.

“I’ve already secured properties for next year,” he reveals. “It’s a never-ending cycle of horror because it takes so long to do what we do and produce this event. It’s like producing multiple movies at the same time.”

Blum says it’s tough to say what his favorite is because he’s captivated by the entire presentation.

“I suppose it’s The Horrors of Blumhouse because it’s my namesake,” he says. “I love seeing our name on the marquee. It’s an idea that John came up with last year, and we decided to do it again this year with ‘Truth or Dare,’ ‘Unfriended,’ and the third piece—the tag where we do this scary logo with this little girl, and he brought that to life.”

Blum is hopefully that his production company’s connection with Universal and Murdy will continue for years to come. He’s got plenty of properties coming down the road for Murdy to choose from.

“We have about four other wide releases next year that are not dated yet but are finished,” notes the busy producer. “The two big films we have in development are ‘Five Nights at Freddy’s’ (based on the popular videogame) and ‘Spawn.’ In development for television, we have ‘Into the Dark,’ which comes out in October, a series of 10 original scary movies based around a holiday.”

Or perhaps Murdy can create an experience connected to Blumhouse’s new Facebook Watch web series called “Sacred Lies.” Whatever Blum and Murdy are cooking up for next year, they’re keeping mum. But isn’t Halloween all about surprises anyway?

One last word of warning from Murdy as we exit the maze into the afternoon sun: “We’ve learned over the years when people think they’ve reached the end, they tend to let their guard down, so it’s a great time to scare them because it’s unexpected.”