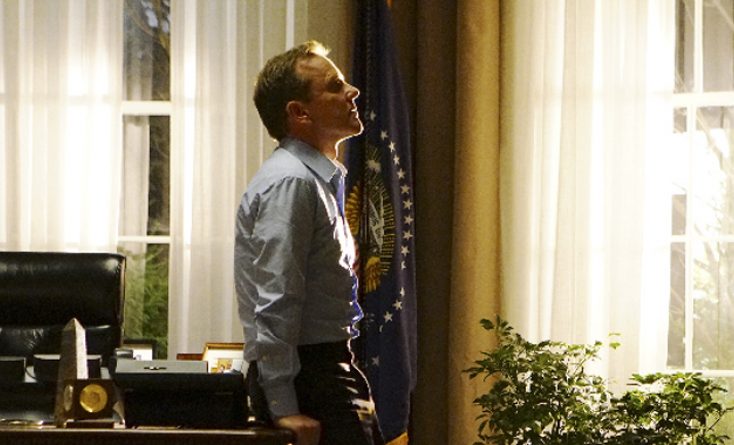 HOLLYWOOD—After years of playing Jack Bauer, a Counter-terrorism Unit agent who protected the U.S. and its President from attack, on the popular TV series “24,” Kiefer Sutherland now takes on the role of a reluctant Commander-in-Chief in ABC’s new drama “Designated Survivor.”

Following a catastrophic attack on the U.S. Capitol during a State of the Union address, a low-level cabinet member, Tom Kirkman (Sutherland) suddenly rises to the highest office in the land. He struggles to keep the country and his own family from falling apart while trying to uncover who is responsible for the attack.

Q: Were you looking to do another TV series?

Sutherland: I was doing a small film in New York; I had no intention of doing a television show. I was very busy, but I felt I needed to give this script a cursory read so that I could at least respond with some intelligence and explain why I couldn’t do it.

I found myself on page 22, and I remember saying, “I’ve got to go back and start from the beginning,” because it was shaping up so beautifully. I remember getting to the very end of the script and realizing that I was potentially holding the next 10 years of my life in my hands. I called Mark (Gordon, the show’s executive producer) and told him I wanted to do it, and he said, “What notes do you have?” And I said, “Actually, I have to be honest with you, I don’t have any.”

I felt the script was so beautifully structured. It had the thriller aspect of trying to find out who had done this. It (also) had a family drama. What happens when, overnight, you go from a very structured life to the life of the President of the United States and the First Lady? What happens to your children? What sacrifices are made there?

It also allowed itself the format, on a political level, to have discussions that I think we need to have in this country in a rational way, not so divisive, but hear really important and respectable points of view from the left and the right. And I felt that this script afforded every opportunity to create a landscape that was so vast that being able to do many years of a show would be possible. That was very exciting for me, and so that’s how I came to be a part of the show.

Q: Do you have someone in mind when you’re playing this guy?

Sutherland: FDR (Franklin Delano Roosevelt) is where I would like him to get to, because I think Franklin was a very commonsense president and I think he approached things in a very human way.

I don’t think (Tom’s) that politically savvy. And I think one of the things that’s going to be interesting in the context of this show is that when he makes an attempt to become political, he might not do it so well at first. You’re going to watch someone really try to learn how to manipulate Washington as Washington slowly gets put back together. Things are going to become more complicated than his ability to just think of what the right thing is to do.

Q: How does it feel to play a character that actually has someone protecting you for a change on television series versus you having to do all the protecting?

Sutherland: One of the first scenes that we shot, I remember Mike Ritter, the Secret Service guy, running into where we were watching the Presidential address and him taking my cell phone and bossing and pushing me around, and I couldn’t help but remember how much I enjoyed doing that when I was doing “24.” So that was very astute. I have noticed it.

Q: What are the negatives that are going to happen with the Tom Kirkman character? Perhaps they won’t be as extreme as schoolteacher Walter White’s transformation into a drug kingpin on “Breaking Bad,” but to suddenly be so powerful, little by little his personality probably is going to change.

Sutherland: If you have someone who has a very strong perspective of right and wrong, and can approach things from that perspective, over time as that becomes more politicized and as Congress and the Senate are put back into shape and those kind of compromises need to be made, you start to chip away at someone’s commitment to what they believe.

I think that that’s going to be something that will certainly be played out between Natascha’s character and mine. And he might go quite a long way in the wrong direction, and then will have to come back quite a long way.

Q: If Jack Bauer came to Tom Kirkman with a breaking terrorist plot, what would they think of each other?

Sutherland: Good‑looking guy. (He laughs,) I really should lose the glasses.

Jack Bauer as a character had incredible conviction and had a real moral compass for that circumstance as well, so I would have to believe that he would trust him.