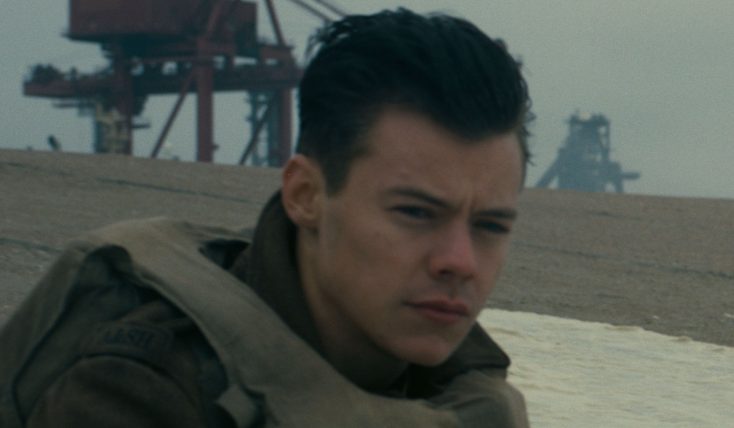 SANTA MONICA, Calif.—The inside of an airplane hangar provides the perfect backdrop for a press junket to promote the new World War II drama “Dunkirk.” Dressed with vintage aircraft, guns and uniforms, the gloomy French beach projected onto a back wall, it also serves a secondary function—a hideout for one of the film’s young stars, Harry Styles, the former One Direction band member and hot new solo artist.

Invited press are asked not to disclose the location on social media so as not to draw fans or paparazzi to the small airport. Styles, 23, like pop sensations before him—Frank Sinatra, Elvis Presley and Justin Timberlake, to name a few—is making the big leap from music to movies. With Styles having a top-selling solo album on the charts and a dedicated worldwide following, it is easy to imagine crowds thronging here just get a glimpse of him.

Wearing all black, with the exception of rainbow accents on his loafers, Styles clearly has the “It” factor as he joins his fellow cast members and director, “The Dark Knight” trilogy’s Christopher Nolan, and producer Emma Thomas, for a press conference. For 30 minutes, he and his colleagues address questions about making the film, which depicts those tense several days in May 1940, when the British had to devise a plan to save as many of the stranded 400,000 Allied troops as possible.

“Dunkirk,” shot partially with IMAX cameras, tells the powerful story of World War II’s Allied evacuation of the French beach from the perspective of various (fictional) characters on land, on the sea and in the air. It was a pivotal point in the war because had the Germans pressed forward, they could have killed thousands of Allied troops and the war may have ended sooner with a different outcome. Thanks to bad German military strategy combined with Britain’s last-ditch plan to send an armada of ships and small boats—some commandeered by the British navy; others piloted by their patriotic civilian owners—toward the French coast to pick up stranded British, Canadian, French, Belgian troops and carry them to safety, the “miracle” task was completed. (The U.S. was not in the war at this point.)

As Alex, Styles plays a young soldier trapped on the beach who acts tough but actually is just as frightened of being mowed down by German aircraft as his fellow soldiers.

Nolan, who cast Styles as well as other first-time actors in the film along with veterans like Oscar winner Mark Rylance and Oscar nominees Kenneth Branagh and Tom Hardy, explains he simply wanted the right actor for his respective role.

“You have to see the potential for them to do something they’ve never done before. That’s really the ideal,” said Nolan who, for the first time in his career, turns his camera to an actual historic event rather than sci-fi or fantasy.

For Styles, “Dunkirk” presented an opportunity to try something new with a director he has long admired.

Q: You have a supporting role in this film. Why did you decide to do it instead of holding out for a starring role in some other film?

Styles: When I first spoke with Chris (Noland) about this film, I thought it was something that I would enjoy watching. It’s something I would have been excited to see even if I had absolutely no involvement. But when I spoke with him, I wanted to do whatever I could to be involved with it. I can’t say I thought about it too much other than to see that everyone on Chris’ set was so passionate about it. It’s so infectious. He creates this environment where the cast and crew has one thought: doing their best for him and doing their best for the film, and making it as good as it could possibly be. I don’t think there’s any room to think about too personal like this. Everyone has the same goal, which is to do their part for the film.

Q: What was your awareness of the Dunkirk operation? What research did you do?

Styles: It’s something you learn in school. As Chris has said, it’s told in this very washed-over way. They talk about the end of the war and some of the events after it. But it’s often (glossed over) how pivotal (Dunkirk) was and the events that came after it. We all feel lucky to be part of something that tells such an important story in a lot more detail than it’s usually told.

Q: How did you prepare for your role? What did you learn from your fellow cast members?

Styles: Being on a set like this, it’s hard not to be always learning, especially when you’re around people you’re a fan of. You just try to soak that up as much as possible. Chris has this way where he’s not really controlling you but he gives you confidence to be as natural as you possibly can. You don’t feel like you’re trying to hit too many notes. At the same time, he never has you overthinking stuff. I just felt very lucky to be on the set of a man, whose work I am a fan of, and working with a group of actors who I’m a fan of their work too. I’m just grateful that I was able to be involved with this.

Q: Given the fact there isn’t a lot of dialogue, what does a note on a Christopher Nolan script look like?

Styles: The thing with Chris’ script is the same as it is across a lot of his other movies. They lend themselves to multiple viewings; you learn more things each time you watch it. I felt the same way when I was reading the script. You learn new things and find new things that and insight within it. Once you get your head around it—the technical stuff—you kind of enjoy it more and more. The more times you read it, it’s amazing.

Q: What was the best note you got?

Styles: Chris kind of creates this world around you where you don’t have to act too much; a lot of it is reacting as much as anyone can possibly help you be in a situation. He creates that for you. It’s not overthinking it or thinking about “acting” too much. Chris really puts you at ease in terms of “say what you need to say” and “don’t overthink it.” If you’re acting, you don’t want to overthink anything. He just creates an environment where you’re not intimidated by the scale of everything that’s going on behind you. He makes you feel comfortable in front of the camera and he doesn’t distract you. And he’s nice.

Q: Physically, what was the most difficult scene? Was it difficult being in the hull of that ship shooting for days on end?

Styles: It was terrible. (He laughs.) The thing was everyone on set was relatively aware that however tough it got for us, it was nothing compared to what (was actually happened). The focus we all had was to do our jobs and try to do our part in telling the story. There wasn’t really any room for personal discomfort or complaining. It’s also impossible to complain on a set where the director is going through the exact same thing as you. He’s not (sitting comfortably) in a tent. He’s in the water with you. He’s in the sand with you. He’s cold.  He’s the first one (on set) and the last one to leave. If anyone thought about complaining, they thought, “Yeah, I might not want to do that.”