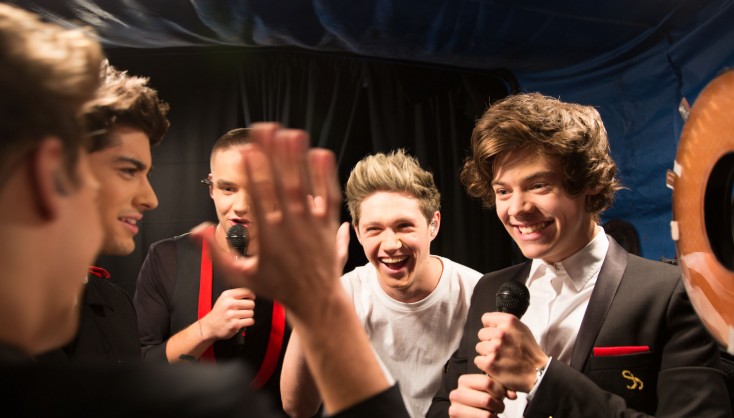 HOLLYWOOD—Like so many British invasions before them, pop phenom One Direction has arrived on the shores of the colonies. If you had any doubt, just consider the five-member boy band already has a documentary titled simply “One Direction: This is Us,” that charts their rise from “X-Factor” (Britain) contestants to performing live to a crowd of 20,000 at London’s famed O2 Arena. And it’s not just pre-pubescent girls screaming their heads off for these young lads ages 19-21. Moms also have gone wild for the band (Niall Horan, Zayn Malik, Liam Payne, Harry Styles and Louis Tomlinson).

Two of the members—Harry Styles and Niall Horan—recently spoke about making the documentary (directed by “Supersize Me’s” Morgan Spurlock) and their meteoric rise to fame. To date, the band has sold more than 19 million singles and 10 million albums worldwide. They’re currently enjoying the popular success of their single “Best Song Ever,” which they perform in the movie. Arriving for an interview together, blond, Irish Horan (who turns 20 next month) and sensitive Englishman Styles (the youngest) are pumped and funny.

“Hello everyone, I’m Niall and this is my club,” announces Horan in his effusive way.

Q: What was the best part about getting to film your own movie?

Styles: I think when it was finished. It wasn’t a massive stressor or anything, not something you thought about every day, because the whole point of the film was to just have a normal day while the cameras were there rather than do a lot of stuff for the camera. When it was done, it was exciting to just see the next step. That was the fun bit.

Horan: Yeah, it’s kind of like making an album. We’ve just finished our album and it’s not coming out for another few months (around Christmastime) and you want people to hear it but, at the same time, you’re nervous. That’s kind of what it was like with the movie. We finished shooting it in Mexico with paparazzi all around. Now we just can’t wait for people to see it with 3D glasses and popcorn, because I love popcorn!

Q: How much creative input did you have on the final cut?

Horan: A lot because the producer of the movie Ben Winston is one of our very close friends and we’ve worked with him on a lot of things. He just did “The Best Song Ever” video. He did our “One Way or Another” video with us, the one for Africa. He did a documentary that we did in the UK and, obviously, when Morgan (Spurlock) came in, we all collaborated together. We’ve seen like 10 cuts of the movie coming up to now so it was good to see everything come together. We didn’t really want to have too much creative input. The only way to make the best behind-the-scenes documentary is to give them all-access to all areas (or our lives). If you’re worried about what people are shooting, it’s not going be a good movie. Just be as normal as possible and hope they are good in the edit (room).

Q: Now that you guys are so popular, are there more people trying to tell you what to do?

Styles: The nice thing now is that even though three years is not a long amount of time, we kind of feel like we now know what band we are. So, there are less things going into it like, “How do we want to do this? How do we want to do that?” because it is like who we are now and it’s kind of …

Styles: Yeah, and it’s easier, but we have an incredible team around us who help us make a lot of decisions and it seems to be a good team so far.

Horan: If we’re wrong, we get told (it) and that’s a good thing. You can’t leave lads our age loose. (He laughs). We have to be brought back in sometimes.

Q: Do you realize the responsibility you have to your young fans?

Horan: (to Styles) I love a challenge but do you want to take that one?

Styles: I think we try just as hard as we can to just be ourselves. That is important especially with the way the world is at the moment. There are so many things telling people to be other than themselves. We try to be who we are while not being stupid. Like on social media, when you are like tweeting stuff, you don’t rewrite a tweet 10 times because you’re worried but you also don’t put stupid stuff on especially if your audience is young and impressionable.

Q: You have fans of all ages. Have you got any quirky, crazy mom fan stories?

Horan: One time, about a year ago, some woman came and gave me her number. Sometimes they are worse. You’ll be at concert and both the mom and daughter will (gesture to you).

Q: Would you guys ever do an acoustic album?

Horan: I think so. It’s always fun to try different things and we haven’t done one yet. It’s fun to just sit around and play songs.

Styles: Yeah. That’s more what we do actually. In our free time we sit around and I play guitar and we jam like that, but the album that we’re making at the moment is a bit edgier.

Horan: I’m doing rap with The Game but this time it’s a lot heavier with drums and all, the old school rock ‘n’ roll. That’s the kind of music we all listen to.

Q: What do you guys look forward to doing in your down time?

Styles: The best part of having time off is you don’t have to set an alarm. Whenever I go home to my parents’ house, I usually fall asleep on the sofa for three hours. It’s just nice to go home and do the really normal things that you didn’t appreciate as much before, like sitting and having a meal with your family is so nice. You behave for your parents and do all of your homework. (He laughs.)

Horan: Yes. I teach you everything you know. I like to just do as many normal things as I can. That’s how we keep each other “normal.” I like to go to gigs and concerts and stuff—just hanging out with friends and jamming on the guitar. I’ve recently started teaching myself how to play the drums so I have a drum kit now in me house and I wake up the neighbors and they’re not very happy. (He drums on the desk.) I’m really good at it.

Tags:Harry Styles, Morgan Spurlock, Niall Horan, One Direction: This is Us
Previous Post‘Sons of Anarchy’ Season Five Rolls in on Blu-ray – 3 Photos
Next PostOne Direction’s Horan and Styles Talk on ‘Us’ – 8 Photos