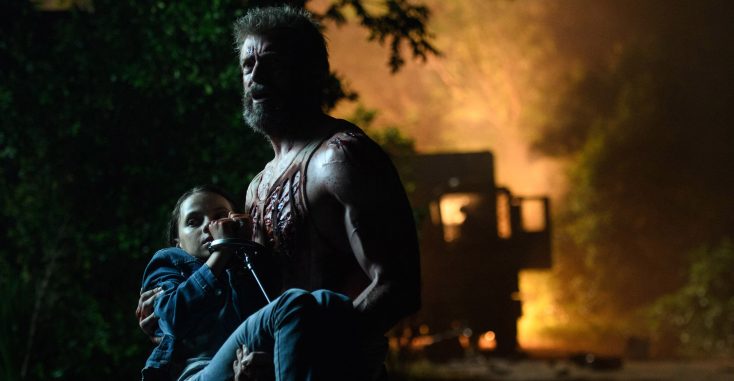 HOLLYWOOD—Director James Mangold, who previously collaborated with Hugh Jackman on 2013’s “The Wolverine,” brings the Marvel antihero back to the X-Men universe with “Logan,” a dark, gritty and emotional finale for that storyline.

The native New Yorker spoke about making the R-rated comic book movie, which is based on a grim futuristic storyline involving Logan (Jackman), a dementia-stricken Professor X (Patrick Stewart, reprising his role), a light-averse telepathic mutant named Caliban (Stephen Merchant) who while hiding out South of the Border from armed commandos that want to wipe them out, stumble across a young girl who may offer hope that the mutant race will not die out. First, they need to escape the clutches of a persistent cyborg tracker (Boyd Holbrook), who has been sent on his deadly mission by the deceptively rational research lab honcho Dr. Rice (Richard E. Grant).

At a sneak preview event held for the film press late last year, Mangold spoke about returning to the popular “X-Men/Wolverine” franchise, reuniting with Jackman and finding “Laura.”

Q: You’ve really shaken it up this time, setting the story in Texas. What were your hopes in terms of setting it there?

Mangold: It starts in Texas and then it travels across the country. I had several different hopes for this film. One, Hugh (Jackman) and I didn’t want to do it unless we could do something very different. We both felt like we had made the last movie and we also felt there are a slew of films, comic book-themed films, superhero movies, whatever you want to call them, and I, for one, am feeling kind of an exhaustion watching them. So, my concern making one was not only I want to like what I make, but I also want to be excited by what I make. I want to be interested in it. I wanted to make a film that was built on the drama first. So when I came to the studio and I suggested what if we made what was essentially “Little Miss Sunshine” with Marvel characters and, believe it or not, they let me. You might not see that directly when you start watching this film but it came from a desire to make a film about relationships. The relationships between Charles Xavier and Logan and, of course, Logan and Laura, a new arrival into these movies.

I wanted to make a movie about family and make a movie about love. Logan is a character who has existed throughout all the “X-Men” pictures, the “Wolverine” movies and comic books galore, pushing away relationships, pushing away intimacy. I felt like if this was going to be the last film for Hugh (as Wolverine), I felt like we needed to push those issues to the fore.

Q: What? The last movie for Hugh?

Mangold: On top of that, we also felt like people were dying to see this clawed character unleashed in terms of the physical action. That’s going to be something else you’re going to be confronted with fairly quickly.

Q: You also wanted to push the R-rating a little bit, right?

Mangold: We made a movie that isn’t worried about getting under the bar. It’s that simple. We just made a movie about a bad*** guy with (fictional alloy) Adamantium claws without worrying  about what I could get past the ratings board. In many ways, it’s not about the language. Essentially, we made a movie for adults. It’s about comic book characters but Westerns were made for adults. Gangster pictures were made for adults. There’s no reason this genre can’t be made, and has in some cases in the past, for adults. I’ll let you judge when you see it instead of saying more. From the script up, I tried very hard with my collaborators to build a world that feels like it’s real, like these characters exist in our world instead of us catapulting our minds into some plastic universe thing.

Q: The young actress, Dafne Keen, is exceptional. What do you want people to know about her and how you found her?

Mangold: I needed a Hispanic 11-year-old girl who was a great fighter and a brilliant actress. That reduced the bandwidth of who we could consider for the role pretty severely. We searched around the world and this young woman, Dafne Keen, we found in Madrid. She is really a revelation. She goes many further places in the film.