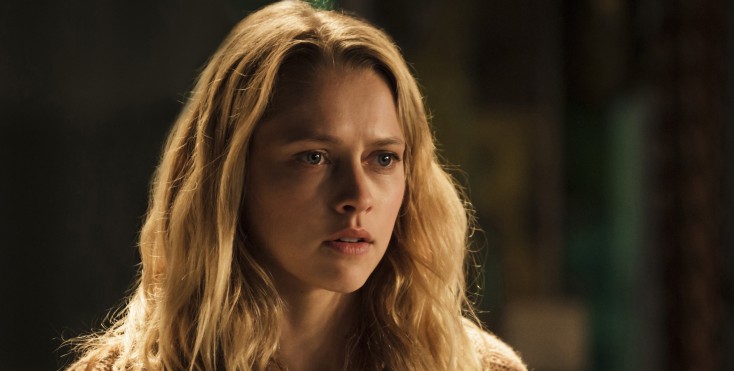 HOLLYWOOD—Teresa Palmer looks every bit the glamorous Hollywood actress as she arrives for an interview dressed in a black and white Oscar de la Renta dress. But the blond, blue-eyed beauty reveals she was more of a “socks and sandals girl” while growing up in Adelaide in South Australia.

“That’s what I used to get called at school,” she reveals in her perky way. “I thought it was a really great thing to wear but apparently not.”

The 26-year-old has come a long way not only with her fashion sense, but in her career, as well. Having started out doing school plays, she began appearing in Australian films while still a teenager. She made her Hollywood feature debut in the horror sequel “The Grudge 2,” but really became noticed when she played the love interest to “Harry Potter” star Daniel Radcliffe in the 2007 coming-of-age drama “December Boys.”

In “Warm Bodies,” written and directed by Jonathan Levine and based on Isaac Marion’s popular novel, Palmer plays Julie, one of only a small group of survivors following an apocalypse, which has turned most of the humanity into zombies. Out with a group of survivors on a reconnaissance mission to find much needed medical supplies, Julie gets caught up in a fight with the zombies. She is rescued from certain death by R (played by “X-Men: First Class’” Nicholas Hoult), a young (but still handsome) zombie who is smitten with her. The undead hero whisks her off to his makeshift home inside an abandoned 747 where something magical happens: they fall in love. As R starts feeling more human again, the two discover that the secret to saving humanity may very well be love.

Q: The film is about alienation, which a lot of young people can relate to. Did you have that feeling growing up that people around you just didn’t get you?

Palmer: Oh yeah. My mom had me in these little frilled socks and a big pink ribbon in my hair and I used to wear Jesus necklaces. Kids are really cruel. So I definitely felt alienated for a while but I think we all feel like that at times in your life. There are peaks and valleys and sometimes you feel completely alone even in a crowded room.

Q: Did that experience of being an outsider attract you to this role?

Palmer: The core of this story is the idea that love breathes life back into people. I connect to that so much; the idea of human connection saving us, being warm to each other and just being loving is the most important thing. You can see people’s spirits reignite and you can see when people have those lights dimmed inside them. When they fall in love, everything gets bright and the world is shaded in a much brighter color for them. So that’s what I think the movie is about.

Q: R manages to woo you with some classic ‘80’s tunes on vinyl. Have guys wooed you with music in the past?

Palmer: I think so. You always have a love playlist when you’re falling for a guy and you share music. That’s always a really interesting thing. I think, for me anyway, music and film is where you can really transport yourself to another universe. You can really escape reality and get lost up in music. I feel so romantic when I listen to particular music like, for instance, Florence and the Machine. I love it so much and I get such a burst of life. I also have American gangster rap that I listen to and I feel much cooler and edgier. (She chuckles.) The power that it has to transform you is quite incredible.

Q: How was it working with Nicholas?

Palmer: Hilarious. Nick is fantastic. What a great challenge for him to have to express so much without having the liberty of actually talking in the movie. He has groans and grunts but he managed to emote so much through his eyes. I felt I was getting so much from him even though I was doing all the talking. He is a humble, bright guy who has been really well brought up by his beautiful parents, who I met. He’s just a gentleman. He will go so far in his career because, yes he’s an amazingly nuanced, gifted actor but his personality really matches that too, so that’s why I think he’ll see great success for him.

Q: Did you two hang out between takes?

Palmer: Yeah, we all did actually. It ended up becoming this beautiful little family. We were each other’s comrades and had fun always laughing. It was really nice. It’s not always a family atmosphere on set but in this one it was. I think it’s important to feel that connection.

Q: John Malkovich plays your father in this. What was it like working with him?

Palmer: It was amazing. I had seen “Being John Malkovich” with my family. My parents don’t really watch movies at all. The only reason I’d heard of John Malkovich was from the movie “Being John Malkovich”. We’d all watched it together. My dad was like “I thought that was a character”. I was like “No. It’s a real person” so that keeps it all very grounded. But John was great the first time I met him. He was wearing a bright-colored shirt with umbrellas on it and I knew “Okay, I didn’t need to be intimidated”. He was humble and so kind. We really created this real father/daughter like bond on set which is amazing. I think it translates on film. I can just feel that. He’s such a gifted man.

Q: When did you know you wanted to act?

Q: What launched you?

Palmer: “2:37” That was the first film I ever did, and we door knocked to get money. The director was 19. We both would write our own scenes and it premiered at Cannes. Right before it premiered I shot this film called “The December Boys” with Daniel Radcliffe. I was the love interest in that so I definitely garnered some attention from that and I think that helped spark the interest of some of the American agents out here. I came out (to the U.S.) for two weeks. I didn’t do any of this until I finished high school, which I think was a godsend. I can’t imagine I’d want my children acting whilst at school so I really had a normal upbringing. It was when I was a year out of high school that I did my first film, which is perfect timing. Yeah, it’s been a whirlwind ever since then. I haven’t really looked back. There’s just been so much going on that I feel incredibly blessed.

Q: Where is home now?

Palmer: Here. Los Angeles is my home now. I relocated in 2007. I kept trying to go back to Adelaide but the commute was a little bit much.

Palmer: I’m actually producing a film at the moment and we’re going to be shooting in Adelaide, where I grew up. It’s called “The Untitled Mark Webber Project”. Mark Webber is this amazing director and actor as well. He directed this film “The End of Love” which was at Sundance last year.  It’s a drama about a married couple dealing with their 5-year-old. It’s actually the breakdown of a marriage, so it’s a little sad but it’s good. I get to play a mom for the first time so it’s exciting. I’ll be 27 soon.