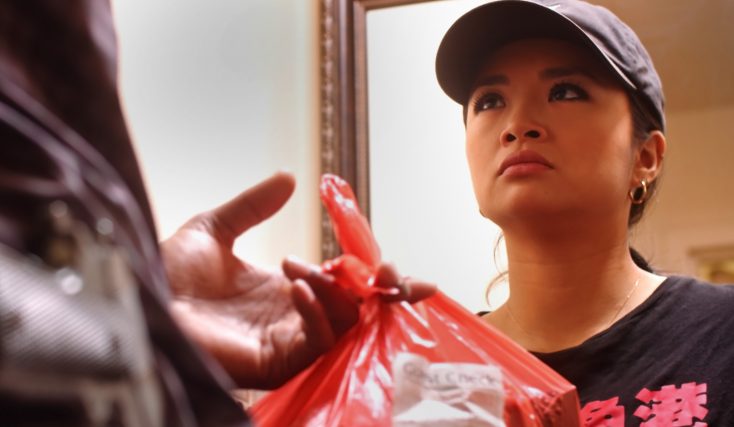 HOLLYWOOD—For actress Hedy Wong, there was a time she had written a story that resonated with her and her experiences of growing up in the San Francisco Bay area in her family’s restaurant. However, she was at a standstill and was ready to put the story on hold until her friend Lorin Alond Ly persuaded her to meet with filmmaker Hisonni Mustafa. That meeting brought her project “Take Out Girl” to life.

In the film, Tera Wong (Wong) is wanting to find a way to help her family’s Chinese restaurant do better. The young Tera figures out an idea to utilize the restaurant delivery as a front for a drug delivery courier service of drug dealer Lalo (Ski Carr) which she hides from her brother Saren (Ly), mother (Lynna Yee) and cousin Crystal (Mier Liu). In a twist of fate, everything takes a dramatic turn for Tera.

During an afternoon online interview, Wong and Mustafa came together to talk about their collaborative experience of writing and shooting “Take Out Girl,” which is currently available on various digital and On Demand platforms.

Front Row Features: How did you come together to create “Take Out Girl?”

Wong: Lorin, who plays Saren, my big brother in the movie, introduced me to Hisonni. Before I met Hisonni, I was just going through the ringer. I was trying to get it made and Lorin kind of saw me kind of wanting to shelve it for a while because I wasn’t going to just get it made by anybody. He introduced me to Hisonni and said, “Hey, this man can make something very little look (like) a lot. Maybe you should take a meeting with Hisonni.” That’s how I linked up with Hisonni and then the magic happened.

FRF: What was the magic for you, Hisonni, when Hedy approached you about this project?

Mustafa: She was the magic. The premise of her film was obviously interesting. When I met her, she was like half Don Corleone and half supermodel. She owned the day. The way she spoke, the way she walked, it was like, “Is this girl for real?” So, I needed more time to evaluate if she was legit. As time passed, that’s who she was. This person I’ve never seen before was so interesting. If I make a movie about her, the whole world is going to find her interesting as I did, so that’s what I did.

FRF: Was there a challenge to getting this film made? Hedy, you wrote this film. Was there a collaboration of writing and rewriting the script?

Wong: I brought the original draft to Hisonni. Like I said, I was trying to make it on my own. The way I wrote it, in some ways, there were more characters. But there was something I did not dare to write because I didn’t know if I could pull it off on my own. When I met Hisonni, he saw my vision, my concept, read it and understood why I wanted the story a certain way. We began cutting things out, adjusting, tweaking—and he just basically amplified everything I wanted to do.

FRF: Hedy, talk about the background of how the story of the film came to fruition.

Wong: I grew up in the Bay Area (San Francisco). My parents ran a Chinese restaurant for pretty much all my life. I moved to LA by myself. I’ve been here for almost a decade and how I put the story together was that I blended the two realities together. Lorin actually grew up in the Pueblos. We don’t talk about the gang stuff in the film that much because that’s not something we want to highlight. There’s a reason he was wearing red in the film most of the time and that’s because that came from his real life growing up in the Pueblos of Los Angeles.

FRF: Hisonni, how did you take your background and make Hedy’s story come to life?

Mustafa: In every way. The sweetest part of making this film is just discovering how much in common I had with someone who is so physically different than me. You know, male, female, black, Asian, tall, short, big, skinny. In every way, we are different but in every way we are the same. Her mother is obviously super duper important to her. The area in which “Take Out Girl” takes place is very similar to my area. It’s one of those places where the American Dream really doesn’t exist.

So, what do you do when the opportunities this country boasts about are not available to you? Saren’s character has a monologue in the film that is essentially his experience in the Pueblos and also my experience in Milwaukee, Wisconsin. You know, watching all of my friends die. I mean I am the only boy from my block to not go to jail or get shot, including my own little brother. So ,when he talks about his experiences needing to become that person that made people afraid of him as opposed to being afraid., that’s my experience.

When Tera’s cousins talks about making enough money (at the restaurant) to come back and do it again, that is something I said exactly at the age of 26 when I decided to become a full-time filmmaker and never work another job again. I’d rather suffer on my own than be stuck suffering for someone else. Every aspect of this film, I could relate to and I was writing in a very personal place. The trick to it was to make sure it spoke to Asians in just as personal a way.

FRF: For the both of you, in this day and age of BLM and Asian Hate, was this the right time for this type of film to come out?

Wong: Yeah, I think so. I feel like society dehumanizes a certain group and only tells one very small part of the story, or just paints us all one way. I feel like in cinema, when we show stories about our greats and our mistakes, it makes it just like everybody else. We are not the other. We’re just like you and me, him and everybody that is trying to find a way. Also, me and Hisonni teaming up, it shows we can accomplish anything in solidarity.

Mustafa: I agree. The optics of Hedy and I, they don’t do justice of how great the collaboration really was and they definitely don’t represent the rainbow coalition of crew members and actors who all came together and grew into a family making a no-budget film in Las Vegas during the summer.

This film is perfectly timed because it’s truly a story that blends the African-American experience with the Asian experience, from a writing standpoint. Because of that, the African American embraces it. They see that Tera’s struggle is just like ours. She is one of us. They are one of us. They go through the same thing as us. It really does bust the myth of the model minority stereotype. That’s what we’re being fed but, in reality, this is what it’s like. The strength of “Take Out Girl” is its relatability. Everyone wants to do right by their mom. Everyone wants to do right by their family, and everyone wants upward mobility. If you can co-sign on the events of the film and root for Tera at all, this is exactly what this time needs.

FRF: What were the challenges of getting this film made and how many days did you shoot it?

Mustafa: We shot 15 days with a crew of about seven or eight people along with 25 five days with a crew of three people. That three-person crew included Melissa Del Rosario, our producer, Alberto Triana, our cinematographer and our producer and of course there was myself and Hedy. However, she was in front of the camera most of the time. It was a very small production. Some of the struggles for me were, essentially, making sure I stayed authentic. There were many times I was tempted to lean into whatever came easiest for me and that would mean I would lean more towards my experience as a Black man rather than learning more on her experience as an Asian American. I had to check my own biases.

For example, with the soundtrack, I can throw a rock and hit five people in my family who do music and I could have soundtracked this one to just that. But would have that been right to make an Asian American film with an all-Black soundtrack? No. So I had to do the legwork and go out and use this opportunity to spotlight talent from the Asian American community as much as possible. It took a lot more work. It was definitely challenging but was way more rewarding. The payoff was tenfold in a lot of ways. I’m glad I did that. I even taught myself that’s the person that I am.

Wong: Shout out to MC Jin and $tupid Young.

Mustafa: $tupid Young and Jack The Misfit. They all came through with these $1 licensing deals that made our film sound like a million bucks.

FRF: Speaking of music, was it an integral part of the film?

Wong: Yeah. I listen to mostly West Coast music. That’s what I naturally lean towards. I’m just glad I have a great partner who is Hisonni who took what I wanted and gave me what I wanted, but also expanded on it because there were tracks that he picked for the film that I wouldn’t normally pick .I’m glad he did because it just made the film so much more bigger than West Coast, South Central LA or East LA or Long Beach. He just made it bigger. I’m grateful where the beauty of teamwork happens.