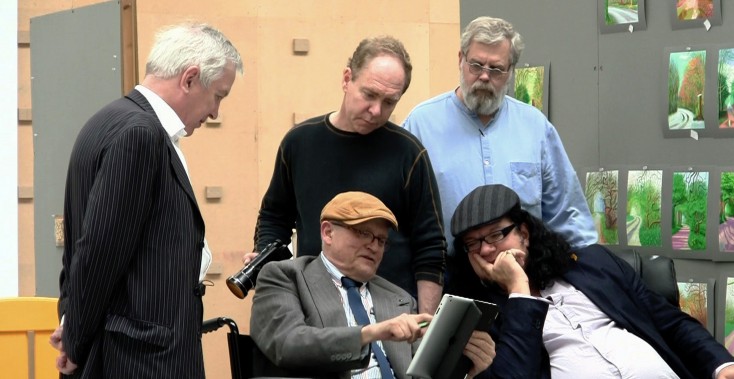 HOLLYWOOD—With a demanding career, a wife and two small children at home, illusionist/author/comedian Penn Jillette wasn’t looking add more to his plate when he embarked on a five-year documentary project about his friend Tim Jenison, a charismatic and tenacious Texas inventor who may have solved one of the greatest art mysteries of all time: how 17th century Dutch artist Johannes Vermeer painted so realistically.

Jenison is the founder of NewTek, a hardware and software company that produces visual imaging software for computers. But he also passionate about art, particularly the works of Vermeer. As a tech guy, he was more interested in how Vermeer so accurately captured light and shadow in his paintings. So Jenison, at Jillette’s urging, used his LightWave modeling and animation system to aid him in building an exact replica of Vermeer’s “The Music Lesson” and set off to test a theory that the Dutch master used mirrors and a modified camera obscura device to create the realistic light in his paintings.

Jillette, and his stage partner Teller (who directed and co-produced the film), didn’t know their film would ultimately focus on Jenison’s determination to paint an exact duplicate—or as close to exact as possible—of Vermeer’s painting.

Despite a demanding schedule performing their act in at the Rio in Las Vegas, the duo followed Jenison on his journey for over four years, with another year devoted to editing thousands of hours of footage into an 80-minute film. Jillette serves as narrator and on-camera interviewer on the film.

During the long filming process—it took months for Jenison to recreate the painting after spending a year building the set in a San Antonio warehouse—Penn and Teller managed to convince renowned artist David Hockney, who wrote about the technique and the camera obscura theory in his book “Secret Knowledge” as well as architect/author Philip Steadman, who wrote about the camera obscura painting theory in his 2001 book “Vermeer’s Camera: Uncovering the Truth Behind the Masterpieces,” to be part of the film.

The Greenfield, Mass. born entertainer chatted about how a desire for a simple non-work related conversation with a friend evolved into a five-year commitment to create a documentary.

Q: How did you have time to make this film?

Jillette: I don’t know that I really did. The whole thing started with me not having time. I’m an old father. My daughter was born when I was 50 so I have young children. With the books and the shows and the movies and the TV show, I found about five years ago when my kids were still toddlers, that I’d gone months without having a conversation with someone that wasn’t in my family or I wasn’t being paid for in some sense. So I called up Tim and said, “I haven’t talked to anyone outside of my family or work for months. Come talk to me.” So Tim flew up from Texas and we went out that night for steak. I said to him, “Talk to me about something that I can’t possibly work on or be involved in. Just take me away.” And he said, “OK. What do you know about Vermeer?” I said, “Not much..” He said, “I think he used a device and I think I know what that device was, and you know his paintings were really photorealistic?” And I said, “Yeah, I saw a show about five years ago that blew me away in New York.” And then he said, “I painted my first oil painting,” and he pulls out this video that shows this oil painting. I did that gasp that the whole audience does when he shows the oil painting of his father-in-law (in the documentary). And I said to him, “Tim, you have so failed. I asked you to tell me about something that has nothing to do with my business, and this is a movie!” He said, “No, this absolutely is not a movie. This is a paper or maybe a YouTube video. No one cares about this. This is my little obsession.” I said, “No, Tim. You’re going to build a (Vermeer) room. This is a movie!”

Q: You talked him into this?

Jillette: Oh yeah. He had a great deal of resistance. He said, “I’m just puttering around. No one cares. I’m just an entrepreneur in Texas. There’s no interest here.” So I tried to palm off the work to National Geographic and Discovery Channel. It was a hard pitch because they thought I was punking them. We got pretty close to selling it, but they had a different idea for the direction in which to take it. They thought we could get anybody off the street and do this as “Vermeer Debunked.” And I said to them, “Oh no!” So I went to lunch with Tim and said, “Oh, let’s just make the movie!” Then, we brought Teller in.

Q: How did you convince him?

Jillette: Teller always has directed the “Penn & Teller: Bull****!” show, uncredited. After 38 years (of performing together), we have very clear roles. I’m not in any way, shape or form a director. Teller does that. I do writing and producing. Teller’s parents were both artists. He has a background in art. And Teller is friends with Tim. They’re as close as I am (with him). I said, “Teller, you should really direct this. You should get the director’s credit and do it for real. What this is going to be is forcing a narrative on chaos, and you’re really good at that. You’re really good at story. It won’t be about setting up cameras, but going over the footage and massaging it.”

Q: What were the technical challenges of making this documentary?

Jillette: The technology on this is astonishing because you think you’re talking about 17th century technology but you’re actually talking about 21st century technology. This movie, 15 years ago, could not be made. It would have been too expensive (to use film). We’ve got thousands of hours of (digital) footage. Every brushstroke is covered by between three and nine cameras. Not one drop of paint is recorded on less than three cameras. Most of it is documented on nine cameras. So we’ve got more footage than “Days of Heaven” and “Apocalypse Now” put together. It’s a new kind of movie. Jean Cocteau said, “Film will only become an art when the materials become as inexpensive as pen and paper.” We haven’t yet gotten to that point, but certainly Tim, Teller and I are privileged enough to have been able to make this without a studio. Fifteen years ago, a crew would have come in once every 10 days (to Tim’s workspace) and set up lights and cameras and film Tim painting a few strokes and then they’d interview him and go away. You wouldn’t have any of the depth of the creative process.

Jillette: It’s not cinema verite. It’s not a selfie. It’s not someone pouring his heart out. It’s not a stunt like (Morgan) Spurlock (“Super Size Me”) or Michael Moore (“Roger & Me”). It’s not talking about an event that happened. We don’t have talking heads or re-creations (of events). This is actually watching the event happen, and the event is not self-absorbed. Tim doesn’t look at the camera and say, “Look at this!” It’s just Tim actually working. All of that stuff fascinates me. When we started this, Teller and I didn’t know Tim could hold the screen as well as he can. He does it perfectly. But we were worried because I love him and because he’s my friend, it actually makes it harder to see if it will work. I think it gives so much more credit to Vermeer than the word “genius.” We’ve talked a lot about this. Genius is an excuse: “I can’t do that because I’m not a genius.” I love that creative process it goes through. I love when we showed this at Telluride—the second audience to see the film—Tim unveiled the painting at the end. (The response there) was like Beatlemania! It was just wonderful.

Q: Does this film inspire you?

Jillette: I’ve always been a plugger. For 38 years, Teller and I, we just fail and fail and then, “Oh, we got this right!” and then fail and fail. We’ve got tricks going in our show now that we’ve been working on for 20 years. Teller and I are always sitting in that room putting (metaphorically) dots of paint down. I have no visual sense at all so it all morphs onto other stuff. I’ve published a few books because I write all the time. I’m always trying to find something. I’m the example of even a blind chicken finds a piece of corn once in a while. Some art critics have insisted that Vermeer was such a genius that he would walk up to the canvas and create his masterpiece. To me, that’s so insulting to humanity. Edison said, “Genius is 10 percent inspiration, 90 percent perspiration.” If you don’t think Dylan puts in the work, you’re lying. He practices guitar more than anyone else.. He just writes all the time to get (the best) stuff. Vermeer is one of the people that a lot of us believed was just able to do it but it turns out he was working. It also turns out that the work is not drudgery, that work is life. So I don’t know if (the film) changed much of what I do but it crystallized it.

Q: Has your family seen the film?

Jillette: My children are 7 and 8 years old. They watched this movie and were fascinated. After the movie, my son wanted to take piano lessons. He wanted to work harder on his videogames. He didn’t act like he understood it, and yet his reaction to it was completely right. He didn’t ask any questions about painting. He just said, “I want to work harder on stuff.” As Dylan said, “The purpose of art is to inspire,” so I hope people get the joy of doing stuff. Accomplishing stuff really feels good, even if it’s a long process.