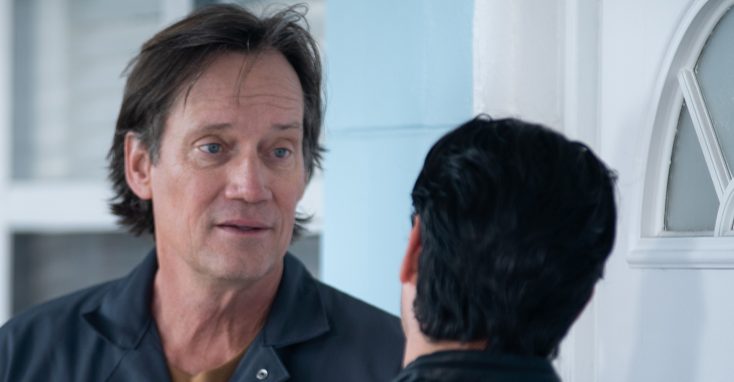 HOLLYWOOD—Kevin Sorbo is primarily known to fans as the titular star of TV series “Hercules: The Legendary Journeys” and as Captain Dylan Hunt on the sci-fi series “Andromeda.” Younger folks and families will recognize him as the nasty real estate developer Winston Mills from the family friendly comedy “Bernie the Dolphin,” which had a successful debut last year. Sorbo reprises that dastardly role in the equally family-friendly “Bernie the Dolphin 2,” whose character is caught between seeking revenge against a pair of pint-size siblings who saved their finned friend and finding redemption and forgiveness for his past deeds.

By phone, the veteran TV and movie actor spoke about being part of the cast of this franchise from Lionsgate, working alongside his co-star Lola Sultan, Logan Allen and Patrick Muldoon (who’s also a producer on the film), and interacting with the dolphins, sea turtles and other creatures at St. Augustine’s Marineland, where the sequel was shot, along with other Florida locations. Directed by Kirk Harris, “Bernie the Dolphin 2” arrives Tuesday Dec. 17 on DVD and digital platforms.

Q: Tell us what you’ve been up to.

Sorbo: We just recently moved (from Los Angeles) to Tampa. I’m from Minneapolis originally and moved to LA after college in 1986. I had a 12-year sabbatical from LA because I shot “Hercules” for seven years in New Zealand, and five years in Canada shooting my other series “Andromeda.” From ’93-2005, I was gone all the time. The last 10 years, we lived in Westlake Village and had been thinking about moving (to Florida) for a long time. I shot 64 movies in my life, and I’ve shot maybe 55 of those movies in the Dallas area or further east: Louisiana, Georgia, Florida. Nothing shoots in LA. I thought to myself, “Why am I paying 13.5 percent state tax and getting beat up in traffic every day?” It was time to make the move. I’ll miss the weather. I’ll miss the geography of California. But I don’t need the aggravation of getting into my car every day (and sitting in traffic). It just drove me crazy.

Q: How long have you been in Florida?

Sorbo: We just moved here in June, so we haven’t been here that long. We’ve been coming here to visit for years. My wife’s sister has been out here for about 35 years so I know the area well enough. I’ve got a couple of movies lined up next year. They shoot in Oklahoma and Texas, and I’ve got a TV shooting in Georgia. So, I think I made the right move.

Q: So, let’s talk about “Bernie the Dolphin 2.” You’ve come back, reprising your Winston Mills character. He’s seeking redemption after serving a year in prison. He starts to have a change of heart after working with the Ryans and the animals at Marineland. Can you talk about Winston’s journey in this?

Sorbo: I love what the writers (Terri Emerson, Marty Poole) did with the character. Yes, he gets out of prison and is put in a work-release program. Of all places, they stick him in an area that he hates to be the most—working with dolphins, and being a janitor. He has a chance at revenge. As a guy who suffered great financial losses in the first movie, with a scam he had going before it was busted up those two kids, so Winston has a chip on his shoulder. Slowly but surely he realizes, “Do I really want revenge? Do I really want to go through this?” The kids win me over with their forgiveness. And I realize this is a chance to have a little bit of redemption and having a second chance at not being a loser. So, I love the way the writers wove that together and did so in a comedic way. As I’ve said before, how many G-rated movies are made in Hollywood anymore? Hats off to Lionsgate for making this second go-round because it’s a wonderful movie.

Q: You’ve got three children so you have a vested interest in making films that you feel comfortable having them watch. How proud are they of you being in these “Bernie the Dolphin” movies?

Sorbo: They love it. In fact, my two boys had cameos in the first one. They were also in the movie I directed last year, “Let There Be Light.” They played my kids in the movie and did a great job in it. My oldest boy, who’s 18 now, definitely has the acting bug. We home-schooled them and so they travel with me whenever I shoot and I’ve been shooting four or five movies a year for the past 10 years so they’re growing up on movie sets. They’re not intimidated by it. They were a little bummed they weren’t in this movie but love these movies because they’re just a hoot. To me, these movies hearken back to a day when most movies were G and PG.

Q: Can you talk about working with Patrick Muldoon again? He plays your “boss” at the marine park in this one.

Sorbo:  Of course. Patrick’s easy to work with. He’s a great guy. We’d met on and off over the years so we finally got to work together. We come from the same background. We grew up playing sports: football and basketball. I was at a state college and he was at USC when we played football. We have that common interest of “dudes that love sports.” That doesn’t hurt. And we have a lot of friends in common in Hollywood.  We had a lot of fun on set and he made it easy. His character, he had a right to be mad at me because he’s playing a father protecting his kids. Winston was out to physically hurt his kids. So, he had to redeem himself to him as well. It took longer to win him over, which is good. He played the part great.

Q: Did you get a chance to interact with the dolphins and other animals at the park?

Sorbo: We had a behind-the-scenes experience that most people don’t get a chance to have. They were great, the people that worked there. They would bring us in the pool in-between breaks and set-ups. We got to go in and pet the dolphins. The dolphins would swim up to us and give us a kiss. I don’t care what age you are, you become a little kid again.

I’m a dolphin fan, big time. I’ve always loved dolphins. I grew up watching the TV series “Flipper.” So, to be able to get out there and do what we did was just fun.

Q: Hollywood is all about reboots and reunions. Has there been discussion of a “Hercules” reboot or “Andromeda” reboot?

Sorbo: With the success of “Hercules”—we spun off “Xena” in our third year. “Hercules” passed “Baywatch” as the most watched (TV) show in the world by our third season and “Xena” was very successful around the world as well. We were both in 176 countries. I always thought, why didn’t they make a Herc/Xena movie around 2001-02 after both shows were off the air. That was weird to me. There were new people running Universal at the time, and I know a lot of egos get involved, so they want to have their own product, but I always thought it was kind of weird (a movie didn’t get off the ground). At the age I am now—I’m still in pretty good shape—but I’m not Hercules. I think if they make a “Hercules” movie, they can age me up to play Zeus, and get a 30-year-old guy who was in the shape I was back during those years.

“Andromeda” would be a different story. For that, we can be pretty much any age. They did it with the original “Star Trek” cast. “Andromeda” was the first TV show from (“Star Trek” creator) Gene Roddenberry after the original “Star Trek” series. He wrote it way back in 1969. My Captain Dylan Hunt was the first captain after Captain Kirk. So, I’d definitely be up for it. I’ve been doing a lot of independent movies since “Andromeda” finished in 2005. I did a pilot for ABC that tested number 1 (out of 20 tested) to them. It was a half-hour comedy, “Bobby Cannon,” written by Barry Kemp, who created “Coach” and “Newhart.”  To this day, I’m shocked that they never picked it up. People have no idea the number of TV shows that never make it to air because of the politics of Hollywood. It still bugs me. It would have been an eight-year hit, no question in my mind. You can see the pilot on YouTube. It’s got a great cast.

Q: What else have you been doing and what do you have coming up?

Sorbo: We have “The Reliant,” that did very well on 800 screens this year, 20 percent above what they were predicting it was going to do. That’s out on DVD (thereliantmovie.com). It’s an action movie about the economic collapse of America. I directed a movie called “Let There Be Light.” “Miracle in East Texas” is another one I directed that’s hitting the film festival circuit. It’s a true story set in 1930 starring myself and John Ratzenberger (“Cheers”), Tyler Mane, Louis Gossett Jr., about two scoundrels that wooed widows out of their money with fake oil wells, but then they actually strike oil, and ends up being the biggest oil strike in the history of the world. It’s doing very well at the film festivals and is slated to come out in theaters May 2020.

I’ve got another movie, “One Nation Under God,” that’s going to open the week of July 4. I’ve also got three documentaries coming out and a TV series. It’s sort of an “All in the Family” meets “Last Man Standing.” It’s a family with a mixture of religious and political beliefs. It makes fun of how ridiculous the PC world has gotten, where everybody’s angry and everybody’s trying to satisfy everyone. It’s like enough is enough, guys!  Let’s listen to Rodney King. He was urging people, “Can’t we all get along?” I agree with that. I have friends who have different opinions but we’re still friends. You can have differing opinions and thank God we do.

Q: If people will allow you.

Sorbo: I’m getting banned from Comic-Con because they don’t like that I’m a Christian or conservative. Who cares? I’ve got liberal friends. I’ve got atheist friends. It’s weird to me. You get a label and people run with it. They have so much hate. It’s like, relax.

Q: The burning question is: will there be a “Bernie the Dolphin 3?”

Sorbo: That’s up to Lionsgate. I have no idea. We had fun with this one. They could do a movie a year with if they wanted to. Make it an annual event. They did a Hercules/Xena animated movie and I think they blew it by not doing one every year. It doesn’t matter how old we get; our voices are our voices.  With “Bernie,” if they get a good kickoff with DVD sales, and we get enough people interested, they’ll do it. It’s show business.