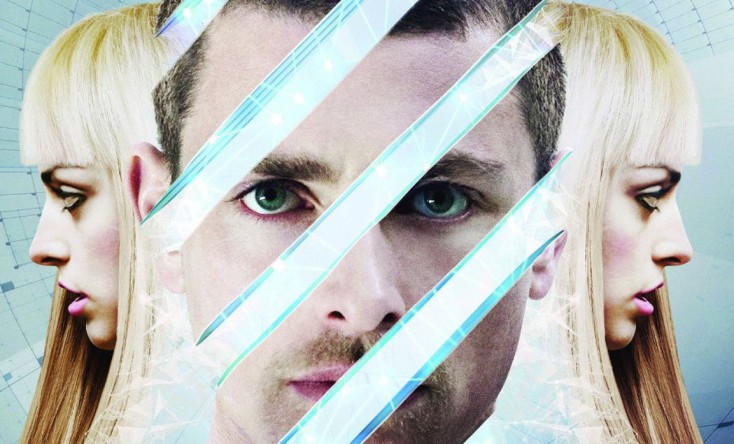 Ella (Barton) sneaks off one night to snoop through her fiance’s storage unit on the seedy outskirts of town. But deep in the lower levels of the warehouse, Ella and a half-dozen storage unit customers discover there’s more than old furniture and memorabilia being locked away here. A relentless psychopath has started his own “collection,” and unless Ella and the others can survive the blood-soaked rampage of the Hoarder, and find a way out of the maze-like building, they’ll never see the light of another day.  The DVD includes a special feature on the making of “The Hoarder.” RLJ Entertainment presents “The Hoarder” on digital video and on DVD for a suggested retail price (SRP) of $27.97.

The organization Brand New-U helps its customers make a “life upgrade” by replacing their life with an “identical,” albeit a more advantageous one. It identifies people that walk and talk like their customers but are walking through different, better lives. After eliminating the better-life donor, they relocate their client to a brand new life.

Slater (“Agents of S.H.I.E.L.D.” star Nick Blood) seems to have the perfect life, the perfect job and the perfect girlfriend but when his girlfriend is abducted by Brand New–U, and a corpse is left in her place, he goes undercover to become an “identical.” As he moves through a series of parallel lives, he becomes more and more obsessed with finding his girlfriend, but what he ultimately has to discover is himself. Lachlan Nieboer (“Charlie Countryman”), Nora-Jane Noone (“Brooklyn”), Michelle Asante (“London Boulevard”) and Tony Way (“The Girl with the Dragon Tattoo”) also star in the action-packed, futuristic drama.

Bonus content on “Identicals” includes two behind-the-scenes featurettes. “Discussion with Writer/Director Simon Pummell” takes viewers through Pummell’s process of creating the futuristic world, while “Visual Effects Breakdown” shows the step-by-step process of how scenes are brought to life with the help of green screen and visual effects.

“Curveball” is available on DVD Tuesday, April 5. Directed by Brandon Thaxton, the inspiring baseball drama stars Rockmond Dunbar (“The Mentalist”), Jean-Luc McMurtry, Lynn Whitfield (“How To Get Away With Murder”), E. Roger Mitchell (“Selma”) and Adam Aalderks (“Ashby”).  The film is available to watch on Urban Movie Channel (UMC), a premium subscription-based video streaming service created by Robert L. Johnson, chairman of RLJ Entertainment and founder of Black Entertainment Television (BET).  The DVD is available for $27.97 SRP and is also available Tuesday on digital video.

Smart, popular and star pitcher of his high school team, Nolan (McMurtry) has managed to put his troubled childhood behind him with the help of the two things he could always depend on: his love of baseball and his best friend, Sam (Aalderks). But just as Nolan’s future is looking bright, Sam starts leading him into trouble—playing hard and partying harder. Even with the help of people who love him and will risk everything to save him, it’s up to Nolan to keep his head in the game before he strikes out for the last time.

Against the backdrop of post-World War II Australia, the series stars Marta Dusseldorp (“Jack Irish”) as Sarah Adams, a nurse who becomes involved in the affairs of the wealthy Bligh family.

The box set includes all 10 episodes along with the originally intended ending of Season 2 (DVD 3-disc set, $59.99, AcornOnline.com). It premiered in the U.S. last December on Emmy-nominated Acorn TV, the premier North American streaming service for television from Britain and elsewhere. A fourth season is currently in production.

Season 3 picks up with nurse Sarah Adams (Dusseldorp) and the aristocratic Bligh family. Torn between her traumatized husband, Rene (Winspear) and dashing ex-fiancé, George Bligh (Climo), Sarah must make a heartrending decision. Meanwhile, the Blighs face their own obstacles: the marriage between young lovers Anna (Earl) and Gino (Mignone) is off to a rocky start; new mother Olivia (Parkes-Lockwood) tries to keep a devastating secret from her husband, James (Berry); matriarch Elizabeth (Hazlehurst) contemplates life away from Ash Park; and the villainous Regina (Baird) will do anything to get what she wants—even if it means tearing the family apart.

Created by Jonathan Tropper and David Schickler, the Cinemax action-drama “Banshee” charts the continuing twists and turns that follow Lucas Hood (Antony Starr, “Lowdown”), an ex-convict who improbably assumes the identity of sheriff of the rural, Amish-area town of Banshee, Pa., where his former lover and partner-in-crime has been living under her own alias, Carrie Hopewell (Ivana Milicevic). This action-packed series has developed a devoted fan base of “fanshees” who are hooked on the high-octane storytelling and compelling characters.

Timed to its fourth and final season this winter, “Banshee: The Complete Third Season debuts on Blu-ray ($34.98 SRP; includes Digital HD copy) and DVD ($26.95 SRP) on Tuesday, April 5. The release is loaded with extensive bonus content taking “fanshees” behind the scenes of the show.

Season 3 begins a month after the Season 2 finale, when Carrie’s father, gang kingpin Rabbit (Ben Cross), finally met his demise after a climactic church shootout. Carrie, now exposed and estranged from her husband and kids, remains in Banshee, working as a waitress by day while moonlighting with Lucas, Sugar Bates (Frankie Faison) and Job (Hoon Lee) on a variety of local heists. As Lucas finds it harder and harder to keep his true identity from his deputies—especially Siobhan Kelly (Trieste Kelly Dunn), now his romantic interest – he and the Banshee police force become embroiled in a new conflict between Amish gangster Kai Proctor (Ulrich Thomsen) and Chayton Littlestone (Geno Segers), the vicious, vengeance-minded leader of the Redbone wing of the Kinaho tribe. And as fists and bullets fly in and around Banshee, Lucas concocts a new scheme that could net his thieves a fortune—by robbing a decommissioned Marine compound housing millions of dollars.

Both the Blu-ray and DVD are jam-packed with bonus features including “Banshee” origins, the story before the story with eight prequel videos featuring the cast of the show; Banshee Origins saga, which explores the lives of Lucas, Carrie, Job and more before they made their way to Banshee in this two-part feature, Burton vs. Nola Camera Movement, shows how an epic fight scene was filmed; deleted scenes, Genoa rehearsal, audio commentary with the cast and crew and more. Additionally, the Blu-ray includes “The Heist,” a featurette offering a unique multi-camera, interactive perspective from episode 7.

The faith-based action drama “The Masked Saint” will be released on Video on Demand Tuesday, April 5. The film, which won the award for Best Picture at the International Christian Film Festival in 2015, was directed by Warren P. Sonoda and stars Brett Granstaff (VICE), Lara Jean Chorostecki (“Hannibal”), along with Diahann Carroll and former pro wrestler “Rowdy” Roddy Piper.  The film enjoyed a theatrical release in January.

Inspired by true events in the life of former wrestler and pastor Chris Whaley, and based on his bestselling book, “The Masked Saint,” follows the life journey of Chris Samuels (Granstaff) and his wife (Chorostecki). After retiring from the professional wrestling ring and settling down as a small town pastor, Samuels witnesses rampant crime and serious problems in the community. Tapping into his past, the pastor decides to moonlight as a masked vigilante fighting injustice. When crises hit at home and the church, the do-gooder must evade the police and somehow reconcile his secret, violent identity with his calling as a preacher.

Available now on VOD is “Fastball,” a documentary that explores the baseball phenomenon. Starring baseball greats Hank Aaron and Derek Jeter as well as other baseball legends and scientists, as they explore the magic within the 396 milliseconds it takes a fastball to reach home plate, and deciphers who threw the fastest pitch ever. The fascinating documentary, written and directed by Jonathan Hock, is narrated by “Field of Dreams” star and Academy Award winner Kevin Costner. It also can be seen in select theaters.