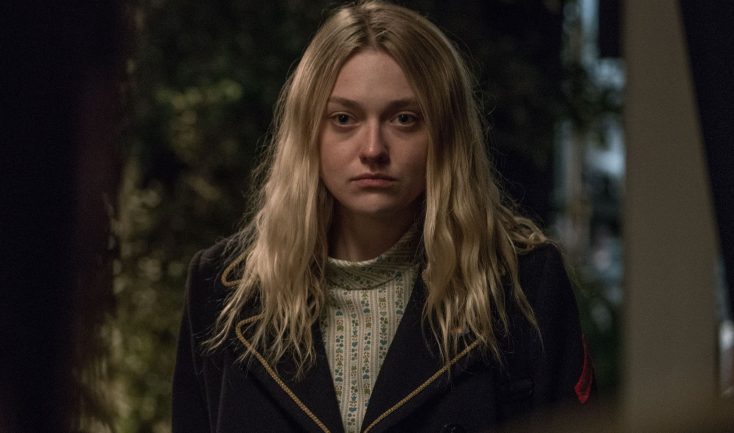 HOLLYWOOD—Dakota Fanning plays a teen that seems to have it all in middle-class 1960s America but she is driven to a very dark place with her abhorrence with the Vietnam War in the family drama “American Pastoral.”

Merry (Fanning) has a loving family and a beautiful home but as America’s war in Vietnam escalates she begins to pull away from her parents and all the luxuries they possess. She eventually is suspected of setting off a deadly bomb in her quiet community and then disappears. Her father (played by Ewan McGregor, who also directs the film) goes on a frantic years-long search to find her while her mother (played by Oscar-winning actress Jennifer Connelly) tries to move on with her life. The drama is based on the Pulitzer prizewinning novel by Philip Roth.

Fanning, who has been acting since she was six spoke about taking on the dark rebellious role, working with a first-time director and growing up in the public eye.

Q: What was it like getting into that role, getting mean and down and dirty?

Fanning: I was looking forward to it. I was looking forward to playing this character for a long time. I was attached to this film for a really long time so I had a while to think about it. She’s a challenging character. She is difficult to understand, maybe impossible to understand. It’s rare when you get to play a character that almost never redeems itself. They’re committed to their beliefs and that’s that. I kind of liked getting to play someone who was unapologetic. Sometimes you talk about a character and say, “Oh, I can relate to this” or “I can relate to that.” But this is one of those times where I always hesitate to say that. I can’t relate to too much about her, you know. I was interested in that and interested in the challenge that comes with playing a character like Merry. She’s sort one of a kind. Different from anything I’ve ever done, for sure.

Q: Some actors say characters stay with them after they’ve finished playing them. I think it would be difficult to play someone who is full-throttle angry. Is that something that sticks with you when you were playing the 16-year-old version of Merry?

Fanning: I think maybe this has something to do with having started out at a younger age—I’ve never had that issue of anything sticking with me. I just don’t think about it. You’re very sort of in it when you’re working but when you’re not you’re yourself. Things have definitely stuck with me in a way where I’ve been, like, tired or you feel, sometimes, emotionally drained. But it’s never haunted my dreams after. This film I definitely gave it everything I have. But that’s always a good feeling. I kind of welcome the drained feeling because it means you’ve given your all and worked hard so…

Q: It seemed that everyone was always trying to dissect Merry and figure out why she was what she was from the time she was young. Do you think her having to do those books on stuttering and things like that helped build her anger towards her parents and did it help build up that anger? People want to have some reason why somebody does something.

Q: But sometimes there is no reason.

Fanning: I don’t know if we necessarily do either. For me, I don’t see her stutter as the reason why she did the things she did. When we meet her at 16, when I start playing her, she kind of uses the stutter as a source of power. She uses it as a weapon against her parents to make them uncomfortable. It no longer sort of pains her. Probably the most straightforward reasoning why she does something is because she was growing up in such a turbulent time where, on every form of media that was around then, you’re just seeing violence and despair and fighting and all of this chaos, and its such a contradiction to her life growing up, which was sort of this idyllic, perfect bubble. Just kind of trying to rationalize why you get to experience that and somebody else doesn’t. So I feel like that’s the go-to answer for that question. It makes sense. As for why it goes so far, I always hesitate to say that I understand because I don’t know if anyone does because sometimes it just happens, and it’s OK. I’m OK with that.

Q: How much research did you do to get into this role? Was it a tough transition to go from that sweet little girl to someone so angry?

Fanning: I start when she’s already angry so there was no transition from sweet to angry. I had as much knowledge as I can, having not lived during that time of what was going on. It’s all so pretty detailed in the script what she’s angry about. You see it in that first scene when she’s watching Lyndon Johnson on the TV. You see it right away. I felt what I needed was there and what I already knew was enough. It was written in the script what she was angry about so I was like, that’s what it is. I didn’t want to overthink and reason and rationalize it. It’s pretty straightforward the things that are upsetting to her. And she’s kind of irrational so I kind of just went with that.

Q: The themes of this movie are about people being lumped in a certain box or trying to break out. Have you ever felt like you’ve been judged and put in a box where you’ve felt the need to say, “No, I’m not that person?”

Fanning: Yeah. Of course. We all have to an extent. For me, people have a certain idea of the kind of person I am just because I’ve done this for such a long time but I’m still so young. I feel like sometimes people try to define who I am. But I’m 22, and this is when I actually define who I am. For sure I’ve felt that way but I’ve also let go of worrying about that a long time ago.

Q: You were a teenager growing up in the public eye. How did you manage to get through your teenage rebellious years?

Fanning: I was always taught to present myself in front of other people in a professional, rational, normal way. Then the things that happened in private are private. There are things I wouldn’t want anybody to know. (She laughs.) I feel I never really put that weird pressure on myself to rebel or not rebel. I just kind of went with the flow. I don’t put pressure on myself to behave any way; I’m just myself. There’s nothing I can think of that’s a specific thing I’d want to tell anybody now about an angry time. But, of course, everybody experiences that.

Q: Is it easy to have a director who speaks the actor’s language as well?

Fanning: Yeah, Ewan’s main thing on the film was to make the actors feel comfortable. He made it a very collaborative experience for each one of us. That was the most important thing to him so it felt like a very safe environment. I’ve worked with directors who do the same thing but it was very natural to him since he has been an actor for so long and that’s his primary job. It was the best part of making the film was getting to work with him and getting to be part of his first (directing) experience. I hope it’s the first of many.

Q: At 22, you’re at an age where a lot of actors are just starting their careers. You’re already well into it. What are you looking for in roles?

Fanning: I think I’m looking for characters that are different from anything I’ve ever done before and that will challenge me in a new way. I’m not looking for anything specific. When I’m reading a script or thinking about something, my decisions are based on selfish reasons sometimes—a moment that you want to be the one to do. I want to do that. I want to be the one in that film or I want to work with that director. But it changes. Again, I don’t try to box myself in and say, “Oh, I need to be doing this.” What do you mean? I can do whatever I want. (She laughs.) I don’t have to choose one path; at least I don’t want to. I want to be able to do all different things and surprise myself and surprise other people.

Q: Because you have this base you’re already built, has it prepared you to take more risks than someone your age just starting out?

Fanning: Maybe. Sometimes people have preconceived ideas of who you are and what you do and what you can do because they feel like they know me. So sometimes I think it works a little bit in reverse. But, again, I don’t care. (She laughs.)