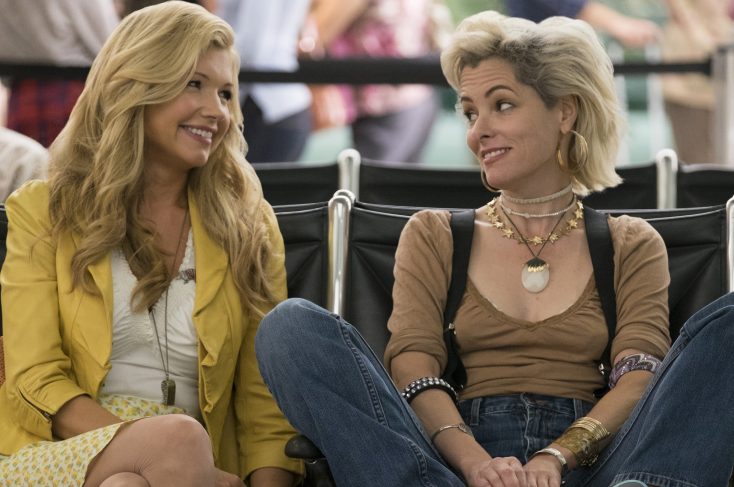 HOLLYWOOD—Susan Yeagley recalls as a high school cheerleader in her native Nashville, Tenn., the squad wore bloomers under their skirts emblazoned with tiger paw prints. That’s so when the girls jumped or twirled, the crowd could see the prints on them symbolizing the school’s mascot, The Tiger. It clearly was sexiest in those less enlightened times, and Yeagley soon gravitated to the drama club, where she found her true calling.

The now Los Angeles-based actress was able to draw from her Southern roots as part of Christopher Guest’s new comedy ensemble “Mascots,” now airing on Netflix. She and co-star Parker Posey (a Guest regular) play bubbly half-sisters from Mississippi who are among the quirky characters that convene at the World Mascot Association’s competition for the Gold Fluffy Awards. The uproarious comedy, Guest’s first in a decade, stars several comedic actors from Guests previous films, including Jane Lynch, Fred Willard, Ed Begley Jr., Bob Balaban, Michael Hitchcock, John Michael Higgins and Jim Piddock, who co-wrote the screenplay with Guest.

Like Guest’s 2000 classic “Best in Show,” which centered on the crazy behind-the-scenes shenanigans that take place at competitive dog shows, “Mascots” takes a humorous look at the mascots subculture. As Laci, Yeagley is the No. 1 supporter of her half-sister Cindi, whose Alvin the Armadillo mascot is quite different from the others in the competition. For starters Alvin is an unabashed feminist whose performance in competition is anything but routine from the more traditional rah-rah sports-focused mascots. Though there is some palpable sibling tension, the bubble-gum chewing blonds stand by each other when in a pinch.

“Mascots” is largely improvised and told in a satirical documentary-style format (which has come to be known as a “mocumentary”) in the tradition of Guest’s other comedies “A Mighty Wind,” “Best in Show” and the Rob Reiner directed “Spinal Tap.”

Yeagley, a former member of the L.A. comedy troupe The Groundlings, has guest-starred on numerous TV shows including “Parks and Recreation,” “Rules of Engagement” and “Curb Your Enthusiasm.” She is married to comedian Kevin Nealon, with whom she has a nine-year old son. The tall, blond blue-eyed actress, who maintains a hint of a southern drawl, spoke about her humble beginnings as an extra in an Amy Grant music video and fulfilling a long-held dream of hers to be part of a Christopher Guest film.

Q: How did you get involved with this project? Christopher Guest works with his usual crew.

What happened was my manager has always known that this was on my bucket list, and out of the blue he called and said, “What are you doing next Tuesday at 2:15 p.m.? Christopher Guest is looking for someone to play Parker Posey’s sister and he wants her to be from the South.” I know that he tends to not to choose famous people. So everything in the past worked against me. I wasn’t a big name. I have this southern accent. But this time, all of those things worked in my favor. I was someone under the radar who was from the South. I went and met with him for a half hour. He doesn’t audition; you just sit and talk with him and he just goes off of his gut. Then I got the call telling me that I got the part. It was amazing.

Q: Was he what you expected?

Yeagley: Because I’ve been married to a comic for so many years, I’ve learned from being with him and his friends that they’re frequently silent. There are very few comics that have to be “on” all of the time with manic energy. The rest of them are very comfortable not talking at all, being quiet. But Chris is such a kind person and so heart-centered, which is why I’ve always loved his movies. They’re not putting anyone down. He’s never making fun of anyone. He’s always embracing and celebrating subcultures, whether its purebred dog owners with “Best in Show” or folk festival people with “A Mighty Wind.” This one is about the world of Mascoting. It’s just a love and heart-centeredness of these subcultures and I just think it’s wonderful.

Q: You and Parker Posey play sisters in this and Christopher gives you an outline of what he wants. Did you come up with the scene in the elevator where you share your gum with Zach Woods’ character?

Yeagley: Yes. That was one take. And I don’t know if I said, Zach, are you OK if I put my gum in your mouth.” I don’t even know if I asked him. I just know that the gum bring tons of gum to set. Craft service and the props people had tons of gum. It just hit me in the elevator: what if? I’m always interested in what hasn’t been done before. I Google’d “elevator love scenes” and watched every elevator love scene that has ever been done, and I’d never seen someone ever swap gum. I thought, “If there’s ever a time for me to put it in then let me try it.”

Yeagley: Gum-breaking! What Christopher does is he gave us an outline. It’s about 32 pages of bullet points. We’re Cindi and Laci. We’re from Mississippi. We’re sisters. We had the characters in very broad strokes. Chris gave us the other’s cell phone numbers and we started talking by phone—because she’s in New York and I’m in L.A.—a couple of months before we filmed. We talked about life and dogs and love and food and really established this relationship as sister so by the time we showed up on set, we really felt like we were sisters. We were able to fill in the gaps. We know we’re sisters and this competition is happening but what were mom and dad like? How did we find out we were sisters? We were able to put this all together—the backstory. The fact that they’re half-sisters and their parents had had an affair. Some of that was in the outline and some of it, as actors, we simply wanted to create that so we had to make sure of the family history and once we had that locked in, we could just show up and improvise. We never wrote any lines down; we just played.

Q: Were you familiar with improvisation?

Yeagley: Yeah. It started at The Groundlings. When I graduated from college, I went straight to The Groundlings. Improv has always been my heart and I love it. I’ve done “Curb Your Enthusiasm,” which is very improv-based, very similar in that Larry (David) creates an outline. “Parks and Recreation” was scripted but they always allowed you to do take three and take four. This was completely heaven for me because there are no lines to learn. You’re not in your trailer studying a six-page monologue. This was just playing and listening. I prefer this type of work.

Q: You and Parker Posey are the only ones who interact with Christopher Guest as an actor in this when he reprises his iconic Corky St. Clair character from “Waiting for Guffman.” What was that scene with him like?

Yeagley: It was so interesting that day because people who had call times earlier and later all showed up to see Chris do his Corky St. Clair. It’s such an iconic character from his films. We were laughing so hard when he said, “Boner!” Let me put it this way: I love having a baby. I love being married. But doing a scene with Corky St. Clair is definitely in my top three life events, and I won’t place them in order.

Q: Now that you’ve been in a Christopher Guest ensemble, are you going to be in his next film?

Yeagley: I haven’t heard anything; his last movie was 10 years ago. It’s such a special experience. Of course, I would love if there were something after this. But, right now, I’m just enjoying every second of this experience. We were in Toronto a couple of weeks ago and that, of course, was a hoot. Of course, I’ve been able to develop all these new friendships, like with Jane (Lynch) and Parker (Posey). A couple of the cast members I knew from The Groundlings, like Michael Hitchcock and Jennifer Coolidge. It really is a beautiful dinner party to be invited to.

Q: Did you get to do any of the Alvin the Aardvark mascot performance?

Yeagley: I sat in on dance rehearsals. Parker designed the costume. She sat with the wardrobe people and sculpted the whole thing. There was a body double that actually did the dance. I sat and watched the rehearsals so I could mimic it in my prep. It’s so pretentious and self-important, so non-sporty. It’s about women and fertility and getting run over in life and the armadillo gets back up.

Q: What was your mascot in high school?

Yeagley: The Tigers. But I don’t remember that our school spent money on the mascot. Instead they put tigers’ paws on the cheerleaders’ bloomers. You’d pull up your skirt and there would be tiger paws.

Q: That would be so non-PC today.

Yeagley: That’s true and Alvin the Armadillo would not be into that.

Q: How long were you a cheerleader?

Yeagley: For one year but I didn’t like pulling up the tiger paws up so I got into drama.

Q: Do you get back to Tennessee much?

Yeagley: All the time. My family is still there. I’ve been back twice this year. I love it there in the Fall—October with all the beautiful foliage. I’ve got a confession to make: I’ve flown there just to have my favorite mac & cheese. My first job in Tennessee was I was in an Amy Grant video and so I got paid $25 and I was given an Amy Grant album. I didn’t have to talk in that one.Q:

Yeagley: “Angels Watching Over Me.” I was 11 or 12. I was sitting next to her wearing parachute pants. I had big hair. She was playing sort of a teacher. Basically, my job was knowing when to lean up in the music, and lean up and lean back. Then I started doing other things like “The Johnny Cash Christmas Special” and local things in Nashville. So it’s been quite a journey to go from being in an Amy Grant video to being in a Christopher Guest movie.