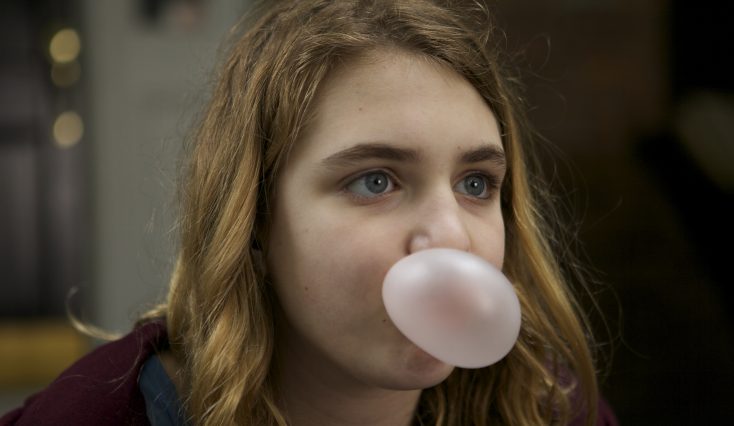 HOLLYWOOD—At just 16, French-Canadian actress Sophie Nelisse has amassed a respectable number of film credits, delivering memorable performances in each. She played a conscientious student in 2012’s Oscar-nominated French-Canadian film “Monsieur Lazhar,” and subsequently had a starring role in the World War II drama “The Book Thief.” The talented blond teen now appears in the family friendly drama “The Great Gilly Hopkins,” alongside Oscar winner Kathy Bates (“Misery”) and two-time Emmy winner Glenn Close. The film can be seen in theaters and is available On Demand now.

Based on the popular Katherine Paterson novel, “The Great Gilly Hopkins” tells the story of an adolescent who has spent most of her life in the foster care system. Gilly (Nelisse) lives in hope that her mother, who abandoned her as a baby, will return. When she arrives at a new foster home run by God-fearing Maime Trotter (Bates), she puts up an emotional guard and considers her quiet foster brother (Zachary Hernandez) a mere nuisance. Similarly, she treats the teacher (Octavia Spencer) at her new school and a friendly classmate named Agnes (Clare Foley) with indifference. An unexpected postcard from her mother (Julia Stiles) gives Gilly hope that they will be reunited. All she has to do is find enough money for bus fare for the cross-country trip to California. The youngster uncovers a stash at a blind neighbor’s house but is caught at the bus station before she can escape. Back at her foster home, Gilly slowly but surely warms to her surrogate family, initially by coming to the aide of her foster brother, who is bullied at school for being “different.” When blood relatives enter her life, Gilly becomes emotionally conflicted.

The actress, whose native language is French, responded to questions in English via email.

Q: How did you get involved in the project? Were you familiar with the book?

Nelisse: No, I was not familiar with the book as I come from Montreal and I am French speaking, I had never heard about it. I was asked to audition during my promotion on “The Book Thief.” We happen to be promoting in New York so I was able to go into the casting office there and audition in person. I later met with (director) Steven Herrick and Kathy Bates during a short stay in Los Angeles. We talked about the script, which was cool because I was going to be able to be a bratty kid and also play with Kathy Bates who is such a great actress.

Q: Did you have to do research into the role? Did you talk to foster kids or do you know any personally?

Nelisse: Not really. I am not really a Method actress. I mostly just played it as I envisioned who Gilly is, reading the script. I also had my best friend Madison in mind as she is a bit of a tomboy and rough-around-the-edges. At least, she was when I filmed “Gilly” over two years ago.

Q: I’m familiar with your previous work on “Monsieur Lazhar” and “The Book Thief,” in which you played completely different characters. Did you enjoy playing this modern, rough-around-the edges girl?

Nelisse: Yes I did. In fact, the reason I wanted to play Gilly is that she is very different from who I am in real life. Unlike her, I’m surrounded by a great family—my brother, my sister and a mom and dad that love me. They are always there for me. So it was cool to impersonate this kind of bad little girl so I got to do things that I’m not allowed to do in real life.

The only thing that disappointed me a little is that I really wanted to play Gilly a little rougher but they wouldn’t allow me to because they didn’t want the audience not to like her in the end.

Q: Gilly has built an emotional wall around her at the beginning of the film but slowly allows herself to care for her foster family and the people around her. Was it tough at first being mean to your co-stars at the beginning? Zachary Hernandez, who plays W.E. and little girl who plays Agnes? As well as sassing back to Kathy Bates’ Trotter character and the teacher played by Octavia Spencer?

Nelisse: Not at all. That was the funniest part to me because it’s something Sophie wouldn’t do but now (as Gilly) I could. And, of course, after the scene was completed, I didn’t stay in character. I was nice to all of them once the director call “Cut.” Agnes, who is played by Clare Foley, has even become a very very good friend that I see at least once a year.

Q: Gilly’s turning point is defending W.E. from bullies at the school. Have you ever had to deal with bullies? What’s your suggestion for other kids who are bothered by bullies?

Nelisse: Bullying is a very sad, sad reality. It is something that should be taken very seriously. There was this incident in school when some girls I knew were making fun of another girl. I did not participate in this and told them that if they were going to keep it up I was going to go hang out with someone else. When I saw (the bullied girl) in the corridors, I would make a special effort to smile at her and say “hi,” to hopefully make her feel better.

Another movie I did last fall titled “1:54,” also deals with bullying. I actually decided to take this role even if it’s not a big role because of the subject matter. If my working on this film can make more people go see it and create awareness, well it’s totally worth it.

Q: You have an amazing cast in this: Kathy Bates, Glenn Close, Octavia Spencer, Bill Cobbs and Julia Stiles. What was it like working with this group? I’m sure you were busy during film, but what kind of fun things did you do together in your down time?

Nelisse: Yes it was so cool to work with all these great actors and actresses. As I mentioned, Clare and me became really good friends so I spent a lot of time with her on my downtime. I was invited at her house and we went to the beach together and did special projects and other cool stuff. Kathy was not feeling well during the filming so sadly enough I did not get to spend a lot of time with her offset. Julia Stiles and I got to go watch (co-star) Billy Magnussen as he was putting on a show as he plays in a band so that was kind of cool.

When we were filming in (Farmingdale and Bedford, New York) instead of going to stay at a hotel, Glenn Close actually opened up her home to me, my brother and sister and my mother. She is so very sweet. She was actually the one that introduced us to sky lanterns. One night we came home after shoot and she had bought these three sky lanterns for my brother and me. We went in her backyard and lifted them up let them go and watched as they disappeared into the night sky. It was really cool. Since we were there during the (Stanley Cup) Playoffs, my mom and her watched New York (Rangers) versus the (Montreal) Canadiens. It was funny because they were obviously rooting for opposite teams.

Nelisse: I can’t say that I had a favorite scene to shoot. I think the most fun ones were the scenes with Clare Foley because we became really close and had so much fun shooting together. Sometimes I even had trouble not laughing during some scenes with her because she’s so funny. So those were the most fun to do.

Q: How fun was it shooting the fantasy red carpet sequence with Julia Stiles? Do you enjoy dressing up and being on the red carpet?

Nelisse: It was pretty fun the way we were all dressed up but it was raining so much that day, we kind of change the scene around and had to make alternate choices. I guess what I like the most about red carpet (events) is getting to wear a new dress every time. I have to admit I do like clothing so that part is always interesting to me. But, I must say promoting the movie is never my favorite part. I know it is necessary and I give 100 percent of myself but I prefer being on set and acting.

Q: It’s interesting in this Internet age that Gilly writes letters to people in this film (and they to her). Do you write letters?

Nelisse: That’s funny. I had not realized that fact. It is true that in our time what we do the most is text. I mean I hardly ever pick up the phone but I do text my friends every day. I don’t really write letters to mail but I do sometimes write notes to my friends. I also have a journal that I write in from time to time. Language is one of my favorite subjects in school so even if I don’t actually write letters I do actually like writing.

Q: What have you been up to since you made this film? School? More films? TV? I read somewhere that you and your sister are in a film together.

Nelisse: I have been quite busy doing all of these things. I go to a regular school and I believe education is very important. I could have been home schooled but I’d rather be able to be with my friends and live as much as a normal life as possible when I’m in Montreal and not filming. Since “The Great Gilly Hopkins,” I have completed five others (“Endorphine,” “Wait Till Helen Comes,” “The History of Love,” “Mean Dreams” and “1:54”). I’m presently on my last week of shooting (French Canadian filmmaker) Lea Pool’s next movie (“Et Au Pire, On Se Mariera”) playing the main characters Aicha, an even more troubled teenager than Gilly. Yes, my sister Isabelle (who appeared in 2013’s horror drama) “Mama,” plays my stepsister in “Wait Till Helen Comes.” That was fun. I like it when she is on set with me. That way we don’t miss each other.

Q: I assume you’re in high school. What is your post-high school plan? College? Continue acting?

Nelisse: I want to go to university. I’m not sure yet what I will study in but, I think it’s important to have a Plan B. Even if I continue acting, I think it’s always a plus to be as educated as possible.

Q: What message do you want audiences to take away from “The Great Gilly Hopkins?”

Nelisse: There are many but I guess one of them would have to be that family is what you make it. Sometimes our real family has nothing to do with our blood relatives. For those out there that have a good family relationship, make sure to show your loved ones how special they are every chance you get.