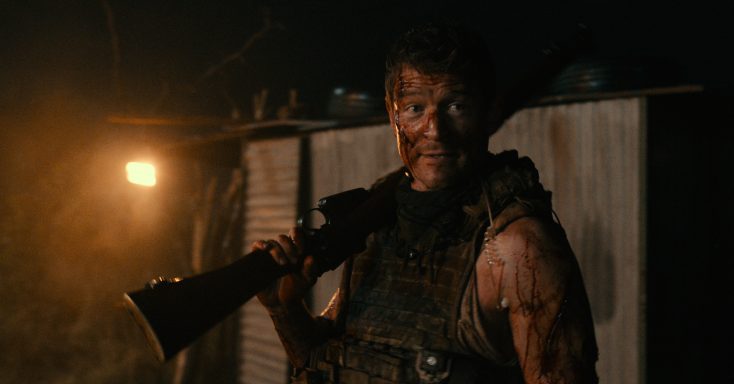 HOLLYWOOD—For five seasons, Philip Winchester played Sergeant Michael Stonebridge, a skilled operative in a covert counterterrorism group on the Sky/Cinemax series “Strike Back.” He took that role very seriously, undertaking physical and mental training with actual counterterrorism and military experts as well as doing all of his own stunts. He now reunites with that series’ executive producer and lead director MJ Bassett on the action thriller “Rogue,” due out on Digital and On Demand Friday Aug. 28 and on Blu-ray and DVD Tuesday Sept. 1.

The film stars Megan Fox (the “Transformers” franchise) as Samantha O’Hara, a battle-hardened mercenary who leads her team of rescuers on a daring mission to retrieve the teenage daughter of a ranking UK official who has been kidnapped for ransom in a remote part of Africa. When the rescue operation goes awry, the survivors become stranded in an abandoned compound where they face not only the approaching kidnappers/rebels but also a pack of lions, led by a cunning and lethal female.

Winchester co-stars as Joey Kasinski, O’Hara’s right hand man, a burly ex-military type with a wicked sense of humor who has the distinction of going mano-a-mano with an angry lioness, who has been mistreated by poachers, and who has gone, well, rogue.

By phone from his home in Bozeman, Mont., where he originally is from, Winchester talks about his new action-packed role, reuniting with Bassett and playing a hero who puts his life on the line to rescue not only the girl he’s been hired to save but additional victims of human trafficking.

By design, “Rogue,” from Grindstone Entertainment Group, a Lionsgate company, not only is an action-packed story of rescue and survival, but it also delivers a strong message about conservation and the need to protect Africa’s wild animals from poachers and exploitation. The production took Winchester back to South Africa, where he had starred in the NBC miniseries “Crusoe” om 2008.

Q: Tell me about getting involved with “Rogue.” What attracted you to it?

Winchester: It was pretty simple for me. MJ Bassett is a longtime friend of mine. We have collaborated on countless projects. She reached out to me and said she’d written this screenplay with her daughter (Isabel Bassett). She said, “It’s going to be down and dirty. And I said, “Yeah, I’d love to.”

Q: You shot this on location in South Africa. Had you worked there before?

Winchester: I had. I started out in television on the show “Crusoe.” I played the character in a place called Plettenberg Bay on a stretch of the southeastern coast called The Garden Route. I went back there and did (the British action series) “Strike Back,” where we did three out of the four seasons in South Africa. So, it’s like a second home to me. It’s just incredible there.

Q: Has it changed much since the first time you were there?

Winchester: It’s changing and growing all the time—Cape Town and Johannesburg. I think I was able to appreciate it more this time. The last time I was there, it was really head down, doing a show, driving hard. You finish filming and then have to go home and learn your lines for the next day. You’re not really exploring and imbibing your environment.

This time around (for “Rogue”), it wasn’t as intense for me. Megan Fox had most of it on her shoulders, and she really brought it. So, I had time to explore Johannesburg, and really come to appreciate it, more than I had before.

Winchester: It was last year, which is really surprising for an indie film. It was fast-tracked. We shot this last October, and it’s coming out less than a year later.

Q: Your character, Joey, is tough and powerful but he’s also got an offbeat sense of humor, and you get a lot of memorable one-liners in this. Was that all scripted or did you ad-lib some?

Winchester: There was a lot of opportunity to just be off-the-cuff. Again, my relationship with MJ, he would not stop a take and allow me to try something else. So, some of it was scripted and some of it was off-the-cuff.  I get into a bit of an arm-wrestling with the lion, and with that I was just coming out with whatever I could because I was just so tired of wrestling an imaginary lion and working with the puppeteer, and getting jerked around with the prop department. Whatever came into my head, I was saying. Some of it made it into the movie.

Q: You get into a wrestling match with this vicious lion, which was actually a very realistic-looking puppet. Did you give the puppet a nickname?

Winchester: I don’t think we did give it a nickname, although we should have. John Eccleston, who’s British, was our puppeteer. He’s great and has a great sense of humor. We had to choreograph what was going on, especially with those close-up shots.

Q: Were all the animals either puppets or CGI? One beautiful scene, in particular, was the one with the elephant herd majestically walking in formation through the compound.

Winchester: That scene, with Kenneth Fok (as Bo Yinn), was actually written in the script. I had my doubts as to whether it was going to work out. We were working on a game preserve, so we had real elephants, real lions, real critters running around at night. So, they had the elephants there but we weren’t sure what they were going to do. MJ shot that scene in about 15 minutes because the elephants just walked through and turned around and headed in the opposite direction. Ken really had no idea what was going on. You can see it in his body language that he’s in disbelief that the elephants are walking right by him.

We were fortunate enough to work with people who really cared about the animals. You’ve got to be careful because some of these places are not like that; you just have to do your homework.

Q: You, Megan Fox and the rest of the “Rogue” cast seemed to have created a genuine bond in this film.

Winchester: I’m glad that came across. Sometimes, it’s tough when you’re dealing with time limitations in indie film but with our South African cast and crew, they came ready to play, and that’s the beauty of working there. The pool of talent and the crew—it’s the best of both worlds. They are **** good at what they do but they also want to have a good time. That is so much fun and it comes across on camera.

Q: You’ve switched gears over the past year or so, having spent a lot of time on Dick Wolf’s TV series “Chicago Justice” and “Law & Order: SVU.” How do you feel about your decision to leave your character, Peter Stone, behind? Would you want to do another TV series?

Winchester: Because there’s such a need for creative content—we’ve eaten up all the content from Netflix, Hulu and Amazon this summer, it seems—I would go back and do a series. But the joy that came out of working with MJ, the opportunity to be off-the-cuff, and not be beholden to anybody else’s ideas, it’s a really interesting and dangerous thing to be part of it, because when you have a taste of that, you don’t really want to go back to those other (more structured) models.

At the same time, with those other models, you can construct a lot of content quickly and have it ready to go. A great case in point is that we’ve been able to weather the storm of COVID and not working for an extended period of time because of the gift of “SVU” and the gift of “Chicago Justice.” Dick Wolf offered (me an opportunity) to be part of the history of that show. So, everything has given me an opportunity to learn. The creative part, for me, in doing an indie film was really attractive, and I’d like to swim around in that (creative model) a little more.