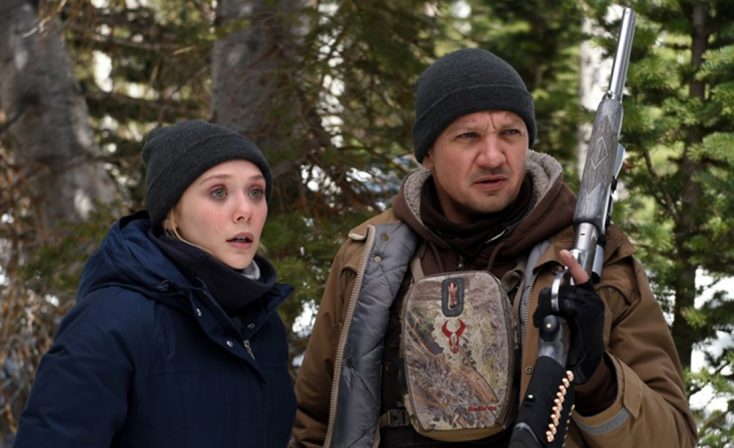 HOLLYWOOD—Elizabeth Olsen has established herself as a versatile and in-demand actress, adept at big action movies as well as indie dramas.  With a breakout role in the 2011 horror film “Silent Hill,” Olsen has gone on to make her mark in critical darlings including “Martha Marcy May Marlene” and “Oldboy” as well as big-budget studio fare, including “Godzilla” and a recurring role as Scarlet Witch in the “Avengers” movies. She is set to reprise that role opposite lead Robert Downey Jr. (Iron Man/Tony Stark) in next year’s “Avengers: Infinity War.”

The 28-year-old Los Angeles native now plays an FBI agent who is called to a remote Native American reservation to investigate the mysterious death of a young woman. She partners with a local wildlife expert/tracker (played by another “Avengers” co-star Jeremy Renner) to investigate, facing obstacles created by nature and by Man. “Wind River” is written and directed by acclaimed filmmaker Taylor Sheridan, whose previous credits include “Sicario” and last year’s sleeper hit, “Hell or High Water.”

Dressed comfortably in a robe for an interview hours before the film’s Los Angeles premiere, Olsen spoke about tackling the role of the inexperienced yet determined law enforcement agent, Jane Banner, reuniting onscreen with her “Avengers” co-star and coping with the elements and difficult mountainous terrain during the challenging shoot in Utah and Wyoming.

Q: You get to play an FBI agent. What was the attraction to do this project?

Olsen: I hadn’t been working for a while so I was trying to be picky about what to do between projects with Marvel. It’s kind of an obvious “yes” when you have an opportunity to do something that I don’t think I’ll have many opportunities to portray. Or maybe I will. I don’t know. To have that kind of authority and playing a federal officer—a young one, a young female (agent)…

Q: And your character is not a sidekick. You’re the agent in charge of the investigation.

Olsen: Yeah, and for her to come in and for this to be her case and the opportunity to get to – at that point it was a different actor – and then when it became Jeremy, it made such perfect sense for it to be Jeremy because the character, the way Taylor wrote it, is so in line with Jeremy’s inherent temperament. To get to have the opportunity to work with Jeremy again in a different capacity (from “Avengers”) was really exciting.

Taylor’s scripts, I imagine if you were to line up with people say in junkets about Taylor’s writing, they’re really beautiful. The dialogue and the characters are special and they’re unique, and they have a depth and an authenticity. The world and the stories he’s trying to create has larger themes and ideas that are very poetic and emotional. So, there were a lot of components that make his writing why I’d want to do it.

Q: An epilogue at the end reveals the chilling fact that scores of Native American women from reservations disappear every year and there is no record of them. That fact is underlying in the film but Taylor Sheridan doesn’t hit you over the head with it.

Olsen: Yeah. The thing that I latched on to is what is reservation law and what is federal law, and when does the federal law supersede reservation law and when do (the feds) step in. It’s a system that seems set up for the reservations to fail. They truly have a lack of tools to help bring justice. So, of course there’s no record. There’s not something you (as a law enforcement official) could focus on when they are already dealing with addiction problems and gang violence. The problem isn’t necessarily with the reservation but with the country and how we treat Native Americans and their land.

Q: Where did you film this?

Olsen: We filmed this in Utah and some exteriors we shot in Wyoming.

Q: It looked very cold and quite remote. Maybe you were near amenities…

Olsen: No, we weren’t. We had to take snowmobiles to work, the Snowcats. To go to the bathroom was like a 30-minute journey. I was barely drinking water.

Q: What was the specific challenge of this job?

Olsen: Physically, there’s just so much gun work and training. But there were also the elements. I’ve never been someone who’s been comfortable in the snow on a mountain. Every time I’ve gone to Sundance, I’ve gotten sick—either my ear or the flu. The altitude just doesn’t work with me, and the cold. So, I was really nervous that it was going to happen again so I went full hypochondriac and do everything that people do before they hike Macchu Picchu. I never got sick. Also, you’re not allowed to complain. You know what you’re getting yourself into (when you sign on). You know you’re going to have to take a snowmobile to set. I had to learn how to be on a snowmobile, how to ride a snowmobile, for safety reasons, obviously. And you know you’re going to be cold. You know you’re going to lose feeling in your toes and your hands. And you’re going to have to rotate socks and (leg) warmers and all that stuff. So, you know you can’t complain because no one else is. Maybe the crew, at times, would get frustrated because they couldn’t do certain practical things that you’re used to doing on some sort of hardwood ground. But not with Jeremy and Taylor, you can’t really complain, “Oh, I’m uncomfortable.” (She laughs.)

Q: Because you’ve worked with Jeremy Renner before, did you already have a shorthand with him? Did you hit the ground running?

Olsen: I guess so because I think if I’d never met Jeremy, and “Avengers” wasn’t a thing, and we’d just met on this, I think he can come across as sort of an intimidating personality. Every time I say that in front of him he thinks it’s a very funny thing. But he does come across—I’m pretty sure—as intimidating. But I am not intimidated anymore. My character (in “Wind River”) shouldn’t be intimidated by him, either so, for that reason, it was helpful. I also think there is a built-in trust that he and I had, Taylor and I had worked a lot with each other on the pre-production side and prepping, so I already felt like I filmed the movie with Taylor before we actually set foot on set. So, the three of us had a really great direct communication but we also were never just satisfied with coming to work, having a scene that’s written a certain way, and doing it. We wanted to talk about it. We wanted to change it. We wanted to just continue to figure out how to tell the story better, as a whole. And, every day, every scene, felt like that, which felt so satisfying, at the end of the day.

Q: There’s a great standoff that rivals the some of the standoff scenes you’ve done in “The Avengers.” I’m sure that had to be carefully choreographed so the action goes just so.

Olsen: (She laughs.) And it does because you can do it all in a master (shot). You don’t need to cut in to anything. If one was squibbed up and ready to fall, we were ready to go.

Q: I assume that was choreographed like any other fight sequence. Did you get any bumps or bruises? I’m sure you were well protected.

Olsen: Even on “Avengers” movies you get whiplash because you’re supposed to be doing reaction shots. The only way you can get used to it is by being a stunt person who is used to doing reaction shots. But I definitely had whiplash doing (the fall back from the door when I get shot at). I didn’t do the full move, the fall. That was the one time a stunt person stepped in for me was for the wide (shot) but I did do the medium (shot) and every other bit. But the wide, from the six-foot or five-foot fall, they pulled a stunt person. It still hurts to do it, to fall from here to here. The training with the gun work was a three-month thing for me. Every weekend I would go shoot live rounds with the weapons trainer who was a former Green Beret and had served many tours. I can’t remember what type of pistol it was. It’s the kind of gun every law enforcement officer uses. It holds twelve rounds.

Q: Did you film this on tribal land? Did you have Native American advisers?

Olsen: Before I signed on, a lot of the investment, the finance money, came from a Native American arts fund (Tunica-Biloxi Tribe of Louisiana, and other sources). While we were filming, we had some of the chiefs from the Apache and the Shoshone come and visit us because those are the tribes that (the U.S. government) shoved together on the Wind River Reservation in Wyoming. We also had the some of the chiefs there at our premiere at Sundance, so we did have their support. Taylor had their support the whole way through. Taylor had lived on a reservation for six or seven years. It wasn’t that he needed them for fact checks; we just wanted their support because you want to be, obviously, respectful and you want to portray a community that doesn’t get a lot of notice in the way they’d like to be portrayed, in an honest, authentic representation.

Q: You’ve also got “Ingrid Goes West” coming out. That’s a cautionary tale about the dangers of social media, isn’t it?