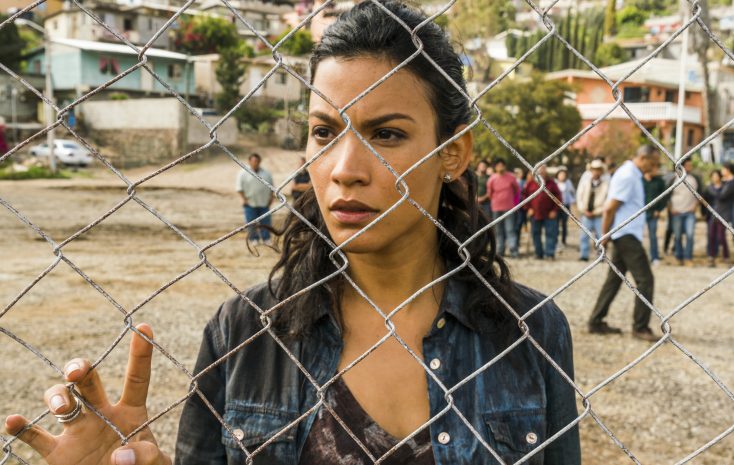 HOLLYWOOD—As one of the new stars of the AMC spinoff “Fear the Walking Dead,” Danay Garcia plays a self-reliant survivor who spends most of her time trying to fend off carnivorous dead people. In real life, the Cuba-born actress is happy to be living in Los Angeles, where she can take a walk in December without having to bundle up … or dodge “the infected.”

“I just came back from a walk and it was amazing,” the actress says by phone. “We’re so lucky.”

As Luciana on the show, Garcia is one of the leaders of La Colonia, a community of survivors holed up behind a fortified “wall” of walkers in Tijuana, Mexico. She reluctantly helps an injured Nick (played by Frank Dillane, from the main cast), who has fled his own group in Los Angeles.

The 32-year-old actress will be familiar to TV viewers of “Prison Break,” where her character, Sofia Lugo, was inmate James Whistler’s girlfriend. She also has had guest-starring roles on “CSI: Miami,” CSI: New York” and “Supernatural.”

Having trained as a ballerina in her native Cuba, Garcia fell in love with acting when she began auditioning for roles in the theater. She was a rising star in her own country when she emigrated to the U.S. in 2003 with her young son. She landed her first film role three years later in the horror-thriller “Danika,” starring Marisa Tomei.

The Complete Second Season of “Fear the Walking Dead” arrives in stores Tuesday Dec. 13 on Blu-ray (with Digital HD) and DVD. The Blu-ray and DVD will be available for the suggested retail price of $79.99 and $69.98, respectively.

The five-disc Blu-ray set includes all 15 episodes of the sophomore season where the survivors from Los Angeles are aboard the Abigail yet unaware of the breadth and depth of the apocalypse that surrounds them. They assume there is still a chance that some city, state or nation might be unaffected by the virus that turns the dead into the walking dead. As Operation Cobalt goes into full effect, the military bombs the Southland to cleanse it of the infected, driving the Dead towards the sea. Madison (Kim Dickens), Travis (Cliff Curtis), Daniel (Ruben Blades) and their grieving families head out on the water in hopes of finding salvation, only to discover that the ocean may not be safe either. Luciana and the others of La Colonia are introduced halfway through the season when they take in Nick who has fled the other group. They too are forced to flee when one of one of the members of the group allows the infected in.

Though busy with hosting duties on Ted/Los Angeles, Garcia was gracious enough to spend a few minutes talking by phone about joining the sci-fi series, dodging zombies, working in Mexico and what’s ahead. (The second season ends on a cliffhanger with her and Dillane’s characters.)

Q: Your character Luciana is introduced in episode eight of Season 2. Are there extra scenes of you and Frank Dillane a.k.a Nick on the Blu-ray and DVD?

Garcia: I don’t know. Everything happened really fast. I got the job and went to Mexico. It was so fast, like that. They showed everything we shot (on the series). I think there is a scene that was a little bit longer but we pretty much nailed it. It was pretty straightforward. There may be one little thing I say but nothing major. It’s all in there (on the show).

Q: Did you do interviews for the commentary?

Garcia: Throughout the season, I do have a couple of interviews that are general interviews about the season and the character. On one day I did a recap of what we shot. It was episode 9 when Luciana starts killing and she reveals who she is. Also when I make a decision to stay at La Colonia. So those two, I remember are the biggies.

Garcia: Absolutely. Of course. We have an amazing producer/writer Alan Page. He has helped me with certain words and certain things. He is knowledgeable about every state in Mexico. Every state, like Tijuana has a different way of saying things. Sometimes I ask the locals right there. I’ll say, “Would you say it this way?” And they’ll go, “Yes” or No.” We work as a team. They give me a lot of creative freedom. I can’t take full credit for everything but what I can say is that I have a great freedom to explore with the language for sure.

Q: You play a pretty strong character in this. How do you stay fit and is it something you were doing before this?

Garcia: You’re going to laugh. My background is professional ballet. I’m going to tell you a funny story. When I first got a script that said that I was going to kill a person, it said I have to cut his throat and pin his hands I was like, “What?” And then the first AD said I had scheduled choreography with the stunt people. They want to show you different kinds of fights, and I was like, “Oh my God!” They say dancers make good fighters but I just didn’t see myself that way. But when I started learning the fight choreography, I got it quickly. At the end of the day, it’s like a dance choreography. You have to rely on your strength. And I naturally work out every day. So I can use some rough sides of me—to run and punch and chop—and I have to be on my toes to work out. The moment I went to the rehearsal, they said, “so you dance? No problem. Let’s give it a shot.” I did my first one and they were like, “You’re really rough. You’re very dangerous.” They shot me with an iPhone camera, and when I saw it, I was like, “Wow!” The choreography was meant to be rough. So I found it very cool; I just slid into it. I had no background in fighting. It was pure instincts.

Q: Would you do well in a real life zombie apocalypse?

Garcia: I’ve discovered that I probably could do it.

Q: When do you go back to work on the third season? Your character’s been captured at the end of the season two. What’s going to happen?

Garcia: We start shooting at the beginning of 2017. I’m assuming that we have to get out of this trouble, this mess we got ourselves into. I don’t know how that will go. I’m looking forward to seeing how they use their “superpowers” to get out. These are complete strangers—Americans on the border. They’re military people. The militia is not fighting with knives; they have guns and they’re very dangerous as you can see. I know we’ll have to negotiate something. Something is going to have to come up in order to get out of it. I’m looking forward to it. I haven’t seen it yet. I hope to see it soon. I’m sure there are brilliant minds that will work out of this situation, other than trying to escape or run or walk with the Dead. This is a different kind of monster we’re confronting.

Q: You were pretty busy this week with Ted/Los Angeles, haven’t you?

Garcia: Yes. Every day it’s been non-stop from morning until late at night.

It keeps going. I’m hosting the whole week. The Ted/Los Angeles is going to be the whole day event with amazing speakers. Prior to that, we have workshops every day. Say your message. Think it out loud. Do it. The day before was about marketing. So I’m hosting each of the workshops. I love it. I do it completely voluntary. I just love being around people who come together to share something. Not only to give your time for a cause. It’s just beautiful to host the whole event. It’s just amazing. I’ve been tired but I’d like for people to join this more often and be inspired by this.