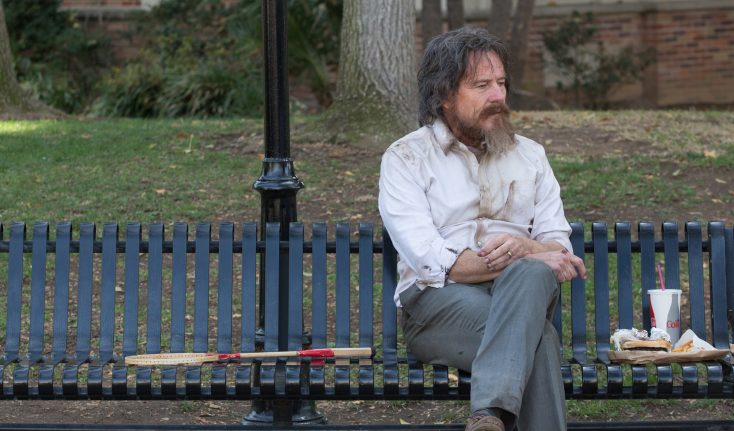 HOLLYWOOD—Emmy and Tony award winning actor Bryan Cranston admits he has had moments where he simply wanted to disappear.

“I’ve wanted to do that, to say, ‘I’m taking a snow day. I’m leaving for a day. I’m not going to tell anybody. I just want to go,’” he reveals during a recent interview.

As his public profile has increased in recent years, the 61-year-old actor acknowledges that his instinct has been to retreat when he’s not working. The proliferation of social media as exacerbated the problem. It is only as of late that he has decided to take back his life and venture out into the world, Twitter and Snap be damned.

Cranston’s character in “Wakefield,” a new drama based on an E.L. Doctorow short story, has his own reasons for hiding out. Howard Wakefield is an attorney at a big city firm who is bored with his job and bored with his family. He has two children with a beautiful wife (Jennifer Garner), whom he seduced 15 years earlier from a close friend, and pangs of inner guilt remain. He wants out. A chance power outage aboard his commuter train presents an opportunity. Arriving home late because of the snafu, Howard opts to hang out in his detached garage instead of resolving a petty domestic dispute with his wife (Jennifer Garner). A night in the garage, where Howard has an optimal vantage point of the goings on in his home, turns into another day. Howard, initially delights in his family’s concern over his whereabouts. Gradually, as the days turn into weeks and the weeks into months, he realizes he not only is observing the effects of his disappearance on his family, but he also is exploring his estrangement from himself.

The film is directed by Robin Swicord, a prolific Hollywood writer whose credits include adaptations of “Little Women,” “Matilda” and “Memoirs of a Geisha,” who also directed the 2007 suburban dramedy “The Jane Austen Book Club,” in which she also wrote the adaptation

Cranston and Swicord recently sat down to discuss the captivating domestic drama, which is largely narrated by Cranston, as his character slips from responsible suburbanite to a hermit-like survivalist.

Q: In the words of Bryan Cranston, “this is a strange movie.”

Cranston: Did I say that?

Swicord: (to Cranston) When you met me, that was kind of how you greeted me. I think that was a legitimate thing to say because it isn’t like other movies. That’s what makes it strange. I don’t think it’s stranger than we are or stranger than you are but it’s not your usual “let’s go to the movies” movie fare.

Q: This film might make audiences think about where they are in their own lives.

Swicord: That’s what we want.

Cranston: We want people to recognize the truth of Howard Wakefield’s plight within themselves. A certain set of circumstances happen—a lack of courage or a lack of stick-to-it-ness, or whatever. Just an inability to confront at that particular time. Every day is a step further and further back and now he can’t cross this canyon anymore.

Q: Bryan, did you know right away this role was something you wanted to tackle? You committed fairly early on.

Cranston: I like to be very judicious about what I choose to do so when I first read (a script). I read it from an objective viewpoint. That’s when I thought, “Oh, this is weird. It’s strange. How do I feel about that? Abandonment, lying, manipulation, sign me up!”

Then you realize, upon rest and reflection, it’s really very honest because I’ve felt that before, so I read it again and slowly you go from objectivity to subjectivity with it, and you ask yourself, “Can I do this? Can it fit? Does it feel right?” It started to make sense to me.

Q: Was that around the time you were performing “All the Way” on stage, because it has a very theatrical feel to it?

Cranston: The first time I read the script was in 2013 when we were in production on (“All the Way”) and it stayed with me. Over the years, I’ve come to trust my instinct. It scared me a little. It’s delicate. It’s a bit of a fragile story to tell. I wondered how is it going to be performed, directed, produced? There are so many things that could go wrong. And how is it going to be received by an audience? So, it was a risky move.

Q: There’s a lot of time you spend by yourself and a lot of time doing voiceover as well as flashback scenes with the family. Which was more appealing to you?

Swicord: I do it all the time.

Cranston: I do it constantly, so it wasn’t weird to hear my voice. I think it’s an important little thing because you don’t want to be reactive to that. You want it to seem like a normal thing to say.

Swicord: He’s a talker out-louder. (to Cranston) You had a great instinct when you said I want to be dictating on the phone in the opening sequence on the train because getting used to the sound of his voice aloud, we understand that he’s a person who’s used to being alone and talking. It’s motivated by this recording thing he’s doing. That gave us a nice little transition. That was something I initially didn’t have him doing on the train but Bryan said, “I think I’m going to have him dictating.” It was nice. It got us used to hearing him.

Cranston: I hadn’t even thought of it that way. To me, there was a solitude to that because he was just kind of closed off. I was thinking of establishing a sense of mundaneness in his work. He can do it by rote. Audiences go, “He’s on the hamster wheel. He’s ticking boxes.” Whatever job you have, there are those times when it’s mundane, and that’s where he is, so when he decides he doesn’t want to deal (with his wife who’s angry with him), you get it. You understand what he’s been through that day.

Q: What’s the longest time you’ve been able to be incognito because in addition to being a father and husband, you’re a world-famous actor?

Cranston: Several days if I don’t leave the house. If I leave the house, I’m noticed. But I know it now and I’m trying not to let it disrupt my life, and it has. A week ago, I went to a car show with my wife. my sister and her boyfriend, who was turning 50 and he’s a car guy. At first I was like, “What am I going to have to deal with here?” But I just enjoyed seeing his exuberance about the cars. We were out and it was nice.

That night my daughter said her girlfriend’s father was in town and asked if we wanted to go out, dads and daughters, and play ping pong, and I went “Yep!” So, we went out and played ping pong. We went to a bratwurst place, and I learned something from that day. Because, left to my own devices, at this time in my life, with the amount of notoriety I have, I would have squirreled away. I would have stayed home. But I realized I’m missing experiences by not pushing out and just dealing with it.

This is one of those things where fame or celebrity is a learned experience. It’s not something I thought of before or wished for, it’s something that came as a byproduct of what I do, and I deal with it. I don’t mean to say it’s all negative because it could sound that way. It’s not. I’m excited when people say, “Man, you really moved me” or “You got me through a tough period because my dad was going through chemo at the time,” or whatever the case is or “a comedy you did made me forget where I was because I just laughed.” So, it’s like there’s real value to that. I just want to try and think of opening up instead of closing down. My instinct had been to more become a turtle.

Swicord: When we were shooting the title sequence in Grand Central Station we had a tiny skeleton crew and we had this one day. It was after we had edited. We always knew that day was going to come. It was planned in our schedule. We get there and we have this tiny crew of about four people. We didn’t have a first AD (associate director). And Bryan turns to me and said, “Where is the security? because there are going to be a lot of people here in a minute,” and I said, “Don’t worry. No one’s looking at you, Bryan. Just walk.” About one second later, 300 people in Grand Central Station had their cell phones up. It had gone out on Twitter that Bryan Cranston was at Grand Central Station. Thank God our DIT (digital imaging technician) was a hockey coach. He came out of his little DIT tent and started directing traffic. “Everybody here to the left.” People were standing in our shot. (to Cranston) Remember, we had to hide you in that little bread shop?

Cranston: I hid in this little cubicle.

Swicord: It was crazy. I was thinking, “This can’t be true. This can’t happen anytime he goes anywhere in the world.” There can’t be 300 people on Twitter ready to show up.

Cranston: That’s the thing. It’s gets exponentially out because the one person (that sees me) is now 100 is now 1,000.

Q: You blew up the internet when you turned up on the set in Albuquerque for “Better Call Saul” (the AMC spinoff of “Breaking Bad”).

Cranston: I wanted to visit my family. We were six years with this crew. I wanted to him and it was great. Then the rumors began to swirl, “Is he working? Is he doing something?” No, I am not on the show.

“Wakefield,” from IFC Films, is in limited release in theaters.  On May 26, it will expand theatrically and will be released on VOD.