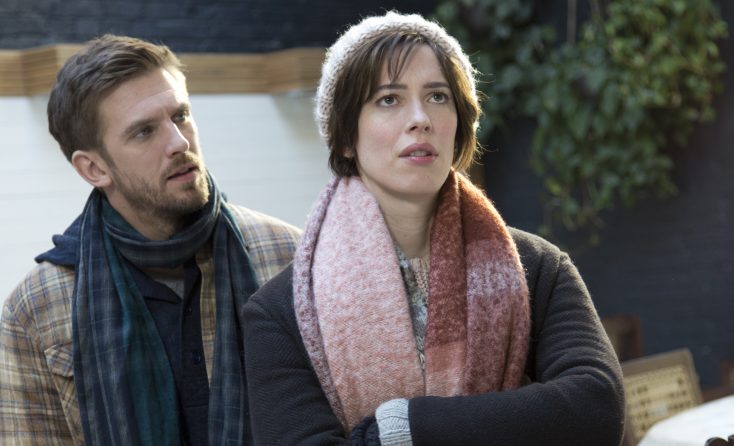 HOLLYWOOD—Dan Stevens and Rebecca Hall have been friends ever since they were theater students at Cambridge. Stevens got his big break appearing in a touring production of Shakespeare’s “As You Like It,” produced by Hall’s father, legendary theater producer Peter Hall.  As their careers have soared, the two have maintained that friendship. Hall is even godmother to Stevens’ children.

So, playing a young couple wrestling with the idea of making the ultimate commitment to one another—marriage— in Brian Crano’s drama “Permission” was a bit of a no-brainer. Will and Anna seem to have it all—good jobs, good friends and a healthy, albeit somewhat routine, sex life. Having begun their relationship as teens, they’ve been monogamous throughout their adult lives. As Will is about to pop the question to his sweetheart at dinner with Anna’s brother (played by Crano’s real life husband David Joseph Craig) and his boyfriend in tow, the conversation turns to their sex life and the fact that neither has had sex with another partner. Initially, they laugh off the ridiculous idea, but the match has been lit and Will decides to hold off on the proposal. Once home at their apartment, Will and Anna mutually decide to open up their sealed tight relationship to others. That way, they figure, they’ll be certain if they were meant to be together. As they embark on their bold experiment, while dutifully keeping each other informed of their sexual exploits, the couple make some significant and life-changing discoveries about each other and themselves.

Hall describes the couple as “Brooklynites who are dabbling in what they think as transgressive behavior to work out who the **** they are.”

“Playing a couple that have been together for 10 years and having known Rebecca for over 10 years, that definitely came into it,” says Stevens about signing on to the project, by phone.

“We talked about the crunch moment when people have been together for a really long time and yet they still don’t know whether they’re ready to get married and have a family and if they don’t they feel like they are a failure,” says Hall, also by phone.

The actress not only eagerly got on board as an actress and producer, her real-life husband Morgan Spector was cast as Reece, who plays her brother’s boyfriend, a man with his own commitment issues. The couple is expecting their first child this spring.

“It’s a grown-up idea about this phase of people’s lives,” says Hall, best known for her role in “Vicky Cristina Barcelona.” “There are 20-somethings going down this road and Brian wanted to write something about that but masqueraded as something else but was actually about a relationship that is essentially good. Anna is good and nice and she and Will get on well but lately (their relationship) is not working. He also wanted to explore how two people who’ve been together for (10 years) haven’t made the room for themselves to grow up.”

Exploring the topic of alternate sexual relationships is hardly new to Hall, who last year starred in the provocative “Professor Marston and the Wonder Women,” which told the true story of the real life psychologist who advocated polyamorous relationships and eventually created the famed comic book character.

Hall says her choice to do films involving non-monogamous relationships is not deliberate but she is aware of and knows people who have unconventional relationships.

“I don’t judge them or think they’re any better or worse off than the path that I have chosen, which is terribly conventional. A relationship takes communication,” she says.

What Hall’s learned from both projects is that open relationships can have pitfalls but if they are handled ethically, with ground rules, then the people involved are more inclined to be communicative and, thus, healthier.

“I don’t come down on the side where everybody should do one thing,” she says. “To each their own.”

Stevens, who is married to singer/instructor Susie Hariet with whom he has three children, said the film reflects where people in their late 20s and early 30s find themselves today. At 35, he counts himself fortunate to find his true love early on. Playing a man who thinks he knows what—and with whom—he wants appealed to him. Plus, “Permission” offered him the opportunity to work with people he has known for a long time.

“There’s a connection there that would be tricky to create with somebody and it’s also tricky material,” says Stevens, best known for his role as the doomed scion on “Downton Abbey” and the oddball superhero lead character on  FX’s “Legion.” “It’s important to be around people you know and trust in that kind of environment. With this (film) there’s a whole group of us who’ve known each other for quite a while—some of whom are married to each other.”

Stevens says Crano, who previously helmed the low-budget independent comedy “A Bag of Hammers” and the short film “Dog Food,” is also critiquing those at an age where they are so self-absorbed they can be oblivious to what’s around them.

“You have characters walking past burning cars and they don’t even bat an eyelid because they’re so caught up in their own little drama,” he says. “So, I think that’s expanding yourself into the world which is quite key to the story.”

Hall’s next appears in  “Holmes & Watson,” a broad comedy starring Will Ferrell and John C. Reilly, due out later this year.

“It was really fun to make and I’m sure it’ll be a really fun film,” she says.

Stevens returns for the second season of “Legion,” which premieres on FX April 3.

“Permission” opens in theaters and is available On Demand Friday, Feb. 9.