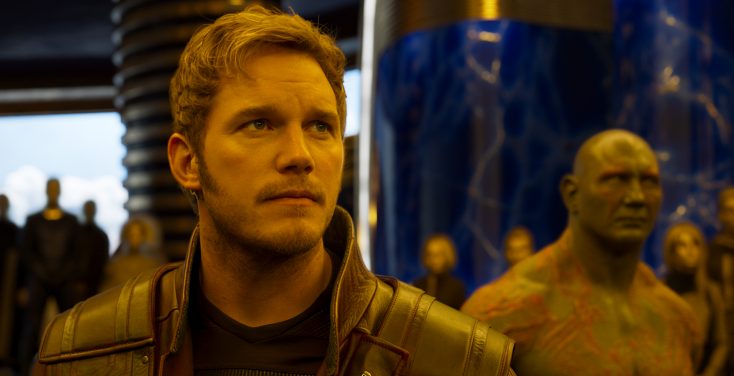 Pratt, 37, is the first to acknowledge the incredible good fortune that fate has bestowed on him. Going from a TV supporting character in “Parks and Recreation” to a Hollywood leading man and bona fide heartthrob, took some effort on his part. Getting his body in top shape and a willingness to occasionally whip off his shirt on the big screen has helped bolster the Virginia, Minn. native’s bank account to estimated $30 million, according to the website celebritynetworth.com. But it’s not all about the Benjamins for Pratt, who is married to actress Anna Faris, with whom he has a 4-1/2-year-old son, Jack. Pratt simply enjoys playing a range of characters that appeal to him and, he hopes, moviegoers.

Muscular with a dry sense of humor, Pratt spoke at a press conference about reprising one of his iconic characters—Peter Quill a.k.a. Star-Lord, leader of a ragtag group of intergalactic heroes, that include a green woman, a blue man, a marbled muscleman, a talking raccoon and a tiny twig with a passion for dancing, in the highly anticipated sequel, “Guardians of the Galaxy, Vol. 2.”

The sci-fi adventure comedy is directed and written by James Gunn, who helmed and co-wrote the 2014 original, which introduced Star-Lord, along with Gamora (Zoe Saldana), Yondu (Michael Rooker), Drax (Dave Bautista), Rocket Raccoon (voiced by Bradley Cooper) and Groot, (voiced by Vin Diesel). The “Guardians” films are based on the popular Marvel comic book series. The sequel introduces moviegoers to Star-Lord’s estranged father, an alien being named Ego (Kurt Russell) with some questionable grand plans, and a golden space being named Kismet (Elizabeth Debicki) who chases the crew around the galaxy after some powerful batteries go missing during a swap. Oscar winner Sylvester Stallone makes an appearance and there are other cameos scattered throughout. (Stay through the end credits for fun surprises.)

As a parent, Pratt says he could identify with some of the father-son issues that surface in “Guardians of the Galaxy, Vol. 2.”  He also explains how he avoids getting starstruck and the honest reality of being a sex symbol.

Q: How was it having Kurt Russell play your dad?

Pratt: There is this thing that happens where you promise yourself you’re not going to do this thing that happens every time you meet someone who’s an icon. Someone who you have known way longer than they have ever know you. You have seen all of their stuff. You have this opportunity from time to time, if you are lucky, to work with someone like a Kurt Russell. You promise yourself you’re not going to do the thing where you geek out. It’s a little inauthentic if you don’t, because if you just go in there and you’re like, “Oh, what is it, Kurt? Nice to meet you. Chris.” I don’t acknowledge the fact that how much I love him and what a fan I am. If you don’t get it out of the way, then it feels a little inauthentic, so I think I did that immediately.

It doesn’t really take that long to tell someone that you really love them, you really respect their work. For them to go, “Yeah, thanks.” Then that’s it. At that point, you move forward and there is this really cool thing that is probably the one thing I would have never imagined looking forward when I first moved to Hollywood, the greatest part of it and biggest secret is you become somebody’s friend and somebody’s peer rather than a fan. That’s really nice. I think Kurt and I have become friends. We’ve connected on a lot of things outside of just the movie.

Q: This film has a lot of comedy and action in it but it also has a lot of heart and themes about the importance of family and the how complicated family relationships can be.

Pratt: When you see the movie, be sure to pay attention to the moment when you see Yondu (Rooker) for the first time. It’s, in my opinion, a series of wordless pictures that truly that moment to me is when this film transcends the genre. I’m not joking. It sounds like I am doing a bit and I’m really not. It’s so beautiful. I want (the viewer) to come to your own conclusions Yondu is shirtless. He is essentially naked and really vulnerable. You see he just had (relations) with these crazy robot prostitutes or something from space. There is this look on his face. He never says a word but you feel his pain. You know that he is hurting inside. You know that he is lonely. You know that he is vulnerable.

Then immediately you cut to him walking in fully clothed with his ravagers behind him and (the viewer senses) his power, but because you saw him naked you know what is going on inside of his mind. That (scene) paints the entire arc for Yondu through the whole movie.

I was just talking to James (Gunn, writer/director whom I told), “It’s ******* beautiful, man.” Yondu doesn’t even say a word. That’s way better than a guy who’s like, “I’m going to take my shirt off and sniff this one and put this one on. Check it out.”

Q: Each of the Guardians are misfits in their unique way. Was there a time when you felt like you didn’t belong? How did you find your family?

Pratt: You’re right, this is very much a family movie. It’s really universal. I don’t think there is anyone who hasn’t felt that at some point in their life. It’s really natural to feel that. (quips) I mean, I haven’t. I’ve always fit in and have lived a comfortable life my whole life.

Q: Speaking about shirtless scenes, there seems to be more films these days where the men, not the women, are objectified. Is there a double standard for men and women in Hollywood? Does objectification help or hurt their careers?

Pratt: It hasn’t hurt my career. We are objects. You shine a light on us. They paint us up with makeup. They take a camera and point it at us. Half of the time what ruins it is us talking. We are props, in a way. As a man, I can say that, but I have to be careful because, for millennia, women have been objectified in a way that has a pretty horrifying past around it.

(Being an objectified man) is a little bit different. I don’t know if you call it a double standard but I think you have to deal with them separately because there is a history of objectification that is a sensitive issue. I can say objectification is good for me because when I turned my body into an object that people liked I got paid a lot of money. Now my grandkids are going to go to a great college because of the object (himself). You have to be a little sensitive about that because there are a lot of really great roles and a lot more great roles, probably, classically written for men than there have been for women.