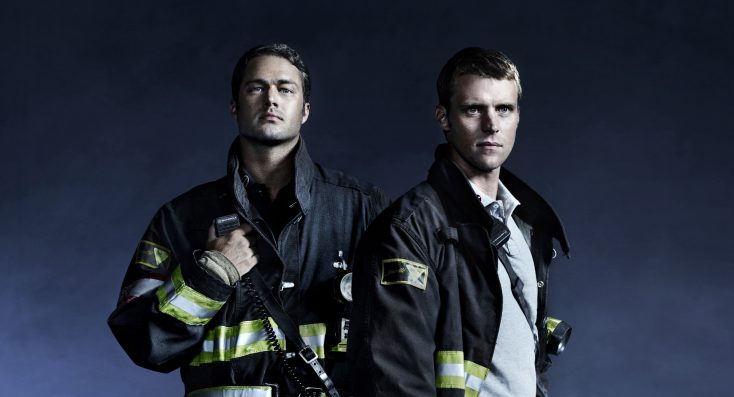 HOLLYWOOD—Taylor Kinney plays hunky fireman Kelly Severide on the wildly popular TV action drama “Chicago Fire.” The handsome 35-year-old practically feels like a native, having worked in the Windy City for five seasons. The NBC series, which also stars Jesse Spencer, Eamonn Walker, Charlie Barnett and Randy Flagler, was just renewed for a sixth season, so Kinney can rest assured he won’t have to give up deep dish pizzas and Cubs games anytime soon.

Kinney, originally from bucolic Lancaster, Penn., has been making fans swoon for more than a decade, since he began his career in a soap opera called “Fashion House.” That experience, in which he played the playboy son of Bo Derek’s character, served as his de facto acting school. Blessed with intense blue eyes, wavy greying hair, an easy smile and an enviable physique, it’s surprising to learn that Kinney struggled early on to find roles. At one point, he turned to waiting tables to pay the rent.

But through tenacity and a bit of luck, Kinney has managed to not only survive but thrive in Hollywood. Already a star in his own right, his public profile grew even larger when he began dating and then became engaged to pop music diva Lady Gaga. Their whirlwind romance was the stuff of tabloid headlines for five years, until they suddenly called off their engagement last July. Though reluctant to talk about the near year-old split, reports have it that the two remain friends.

The personable Kinney spoke openly about dealing with fame, his rocky road to stardom and his love of Chicago during a recent NBC press day to promote “Chicago Fire.” He arrived for the interview fiddling with his phone, which was clearly taking too long to shut down.

Q: Are you addicted to your Smartphone?

Kinney: I did a small arc on “Shameless” (in 2012). John Wells (the producer) had a strict policy with the actors—no phones on set and no sides. You could bring your script but he expected you to come prepared. Mind you, I didn’t get an iPhone until last year. I had a Blackberry until last May. It fell in the water and I went to get a new one and I lost the majority of my information. I had the same number so people could call me and I had the same email address so I could retrieve the emails but all the other stuff was lost. So, I said, “I want a new one.” I asked if my SIM card was compatible and they laughed at me because it was about three years old and the technology had changed. They wondered, “Who is this caveman?” This young 20-year-old clerk was laughing at me. So, I got an iPhone.

But when I got the iPhone, I got hooked on games like “Battleship.” I try to be respectful and not bring it to set because there’s nothing more irritating than when you’re doing a serious scene and your scene partner is fiddling with their Smartphone. So, I think it’s a bit of an epidemic, especially with younger people. People are walking into fountains, accidents, driving. It’s bad.

Q:  Having worked on “Chicago Fire” for a few years now, how has your admiration for the city grown and what do you like about Chicago?

Kinney: I feel each year, each season, I become more and more a part of the community. Me and (co-star) Monica Raymund invested in a restaurant in the West Loop. I’m pickier than I realized when I first started looking for property, for an apartment house to buy, to live there. I’ve been there for five years. I’ve come to love the city and want to live there, and I’ll probably keep it after the show ends.

With the sports teams, I’ve gotten to know a couple of buddies, and I’ve done a number of charity events with members of the (Chicago) Cubs, different foundation work. Kerry Wood, an ex-pitcher for the Cubs, as a foundation that does some great work. So, getting out and just being a part of the community, to watch that grow, is great. The 100 Club is a charity, which raises money for the families of first responders like firefighters and police officers. If I have a charity event, I’ll donate to that cause. So, my appreciation for the city is that—the community, and feeling a part of it more and more each year.

Kinney: To be honest, I don’t think of myself as a celebrity, but more as an actor. The people in Chicago are proud of the success of the show. I remember when we were starting Season One, there’s a consultant on the show named Tony, who’s an actual firefighter. He’s become a good friend and confidante. When we (the actors) started using the firefighting tools, whether the jaws of life or halligans (a firefighting tool used to gain entry), or just getting familiar with the terminology, he helped me. I told him then that once the show started, I wanted to be able to walk down the street in any part of the city, and when I pass a fire house, I at least get the guys to say, “You’re doing a pretty good job. You’re doing us right.”

Sure, there’s creative license in doing a television show, and it’s a bit of a heightened reality but we take pride in telling honest stories that are true to the job.

So, if it’s a fire house that I walk by, some of the guys yell out, “Hey, it’s Taylor! Come on in and have some corned beef. Good to see you, Nice to meet you. Could we get a picture? Tell my kids, ‘hi!’”  That was kind of the reassuring thing that let me know that I’m a part of something good.

Kinney: There’s no book for that so you kind of deal with that as you go. There’s no template. It just happens. Listen, I love what I do and, if I didn’t have an audience then I wouldn’t have a job. So, I don’t bitch or complain about that. I’m always happy to say “hello,” or what have you. I can handle it, and I’ve learned to deal with things as I can expect it. I don’t like it when the invasiveness comes to my family. So, when it’s my mom or my brothers, that, to me, hurts. If somebody does something seedy just to get to me or wants a story, that behavior—I don’t like that. It doesn’t sit well with me.

Q: When a season comes to an end of the show, is there an adjustment period for you?

Kinney: As an actor, I get the occasional day off or half a day, but our crew, God bless them, sometimes they work six days a week, and they’re doing 15-hour days. So, a hiatus is much-needed and I take it.

When I take a movie project and find the right material, then it’s great and I’m excited to do something creatively outside of “Chicago Fire.” If not, I’m looking forward to spending time with family, my nieces and nephews, going to surf a little, and just recharge.

But the difference between the feeling of when a season ends is different from doing a series or movie that ends. I remember when I was doing a show called “Trauma.” It ended when it got canceled. So, there was a grieving period after that because you establish a relationship with the cast and crew. When that ended, because the future was unknown and I didn’t have another job to go to right away. I remember having a moment of emotional release where I was really upset. I was like, “What am I going to do? I miss these people and now I don’t have a job.” That was bad. But knowing that you have a pickup is better because you know you have a job after the hiatus. You get anxious if you don’t know what’s ahead.

Knowing that we’re going back into another season, I don’t know if we’ve gotten an official pickup for Season Six, but I think we’re OK. Going into that like that, you can take full advantage of that two or 2-1/2 months off. I’m not missing Kelly Severide over those 2-1/2 months. (He laughs.)

Q: Is there an episode that resonates with you, either from this past season or before?

Kinney: In one of the earlier seasons, either two or three, there was an episode where a child got stuck in a chute and died. There was a scene towards the end where we, as firefighters, were in our dress blues and we had the (child’s) family, the mother and the brother, pass the firehouse, and we had a ladder raised, the flag was at half-mast and we had our white gloves on, and we were saluting the car. We shot it out of sequence. It wasn’t initially supposed to be the ending. It was a bit serendipitous, the weather. It was snowing. It was freezing cold so we were running in and out of our trailers. I remember watching the episode later and it was really powerful. The way they put it together, the editors, was great. It ended up being the last scene, and I remember thinking, “Wow, that was pretty great.” Sometimes you’re in the throes of work, you’re in the trenches, and you don’t realize at the moment what’s going to resonate when they put it together. But that scene and that episode stick out in my mind.

Q: Do you ever get used to the pace of creating a weekly hour-long drama?

Kinney: I’m really looking forward to our two-month hiatus. Again, I love what I do and I feel lucky to do it but doing a network drama, where I’m usually away from my family and you’re shooting 23-24 episodes (a season) is a lot. Cable shows do maybe 10 or 12 episodes. A film project almost never lasts a year; some of the bigger ones do. But, for the most part, your time commitment is weeks, maybe a few months, but you know the end date. So, I take full advantage of my down time just to recharge.