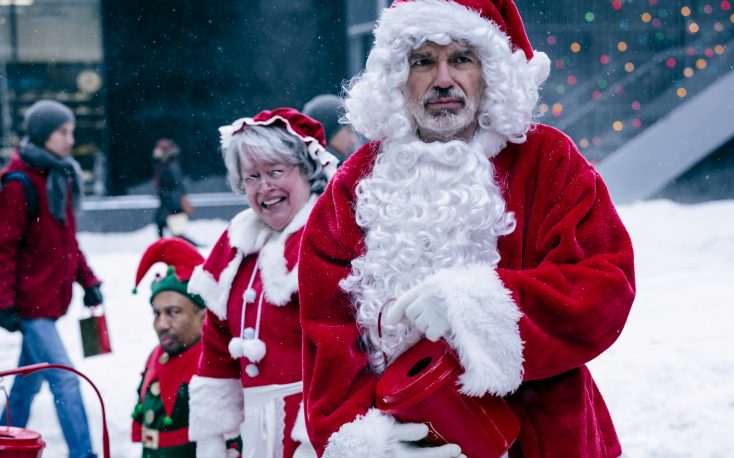 HOLLYWOOD—It’s been 13 years since the outrageous and raunchy “Bad Santa” upended the feel-good holiday movie genre. In the sequel, Billy Bob Thornton, Tony Cox and Brett Kelly reprise their roles as no-goodniks who use the holidays to their advantage, with the addition of new cast members Christina Hendricks (“Mad Men”) and Oscar winner Kathy Bates (“Misery”).

In “Bad Santa 2,” Willie Soke (Thornton) wants to kill himself but, as usual, he fails with Thurman Merman at his side. Thurman Merman (Brett Kelly) was Willie’s young sidekick in the original, and now he’s 21.

Directed by Mark Waters, the dark comedy centers on Willie teaming up again with Marcus (Cox) for a heist. Their target? A Chicago charity. Audiences gain a glimpse into what went wrong in Willie’s life when they are introduced to his conniving mom, Sunny Soke (Bates).

Waters and lead Thornton, who won an Oscar for writing “Sling Blade,” along with other “Bad Santa 2” cast members spoke about making their long-gestating non-traditional holiday movie sequel.

Q: What took so long to make a sequel?

Billy Bob Thornton: There are a few things that go into it. First of all, the studio transitioned a couple of times, changed hands and came back, so we had to wait for all the red tape to be sorted out. We always talked about doing a sequel and the movie was made for a sequel whereas dramas aren’t generally tailored for sequels.

One of the mistakes successful comedies make when they do sequels is that they immediately do a sequel of what you just saw. In order to make it different, they go really far with it. They make it broader, generally. With this one, it actually has a more independent feel than the first one did. Part of it is that the rooms in Montreal (where the film was shot) are pretty small and very cold. But the other thing, when we got the okay to do it, we wanted to take great care. We thought, maybe we’ll never beat the first one and you have die-hard fans and critics who are predisposed to not saying good things about sequels.

We wanted to make sure we got close to the first one. We wanted to keep the spirit of the first movie. In essence, make the first movie and make it different too, which I never experienced that with “Fargo” (which was made into a TV series). It’s like you’re doing a revered movie and now you’re doing a 10-part series of that, so you want to keep that intact and make a good thing out of it. That’s big trick to do. That’s a credit to the writers and Marc. They pulled it off and we took three or four years looking through scripts and several different incarnations before we decided on this one.

It’s helped us because you do have that distance and now. Thurman is 21. You get to see a different guy as opposed to the kid again. To me, it’s funny that Willie is still alive and more suicidal. That just automatically makes it funny to me. The movie doesn’t apologize for anything. Yet, the new one is more emotional than the first one. It brings it closer to being an actual Christmas movie because you do see where Willie came from and you kind of understand more why the way he is. Also, you see he has the love for the kid but he can’t admit it but you know he does. And there’s the raunchy stuff. We pushed that a little further. There’s as much cursing as there was in the first one, but it’s more descriptive.

Q: Kathy and Christina, tell us about when you were asked to join the cast of “Bad Santa 2.” Had you seen the original?

Christina Hendricks: Same as Kathy. When I heard I could work with this group of people, I was thrilled and excited. I mean the first movie was legendary. I was nervous and excited and they all made me feel very welcomed. I have always wanted to do something you could just throw yourself into with complete abandon and 100 percent be raunchy and silly at the same that. That was it for me.

Q: Mark, how was it stepping into the “Bad Santa” universe, taking the reins from Terry Zwigoff?

Mark Waters: I was pretty thrilled to slot right in with these three guys already, then bring in these ****** ladies was a thrill. Initially when I met with Brett, I was freaked out that Billy was in the movie (and I discovered) “What? You’re just a dude.”They don’t give this guy credit. And (Brett Kelly) pulled a De Niro and transformed into Thurman Merman for the sweet spectrum status from the movie. It was a real thrill.

Q: Tony, when you jumped back on set, was it like old times for you?

Tony Cox: It was old times for me. I mean working with Billy again and going after him, the way we go after each other. It was just like family. And Brett Kelly, to work with him, it was just like old times.

Q: Brett, you were eight years old in the first movie. How did you run lines for that?

Brett Kelly: I had to audition like six or seven times for it. Every time I had to audition, I had to run lines with my dad. So once again, you take this cussing and abuse from your father, it was easy to take it from someone else. When Tony and Billy had our first meetings, within five minutes it was like you’ve never known that we’d been away from each other for 13 years.

Q: Billy, do you think your character is more likable because of Thurman’s character?

Thornton: I think people see that Willie was really abused as a kid and he kind of sees himself in Thurman because Thurman never had a chance either. Willie is the kind of guy who wishes he could be close to people but is afraid to because he’s afraid that will go down the **** so I think that relationship (is key). Also, the way that Marcus and Willie have a friendship. It’s like, the first movie, he tries to kill him and yet I go sit in a cafe and ask him, “What do you want?” “I got a job.” “Why would I do that? You tried to kill me.” And he says, “It’s for this amount of money and all this kind of thing.” I go, “All right.” They have this weird sort of criminal relationship (and) there is something sweet about it.

Q: Kathy, you’ve had so many roles of likable characters but this one is just a mean character. Does Sunny have any redeemable qualities?

Bates: My image for Sunny was that moment when Sigourney Weaver sees the mother in “Alien.” Suddenly, I realize where the other ones are coming from. No offense to Billy Bob. I see her as somebody that doesn’t trust anybody on the face of the Earth to begin with. I think of someone who has come a very rough background, not unlike the one she inflicts on her son. There’s a moment when her mother instincts are stirred. It’s when they’ve ripped off the mansion together and they’re splitting the booty in the van, and there’s a moment where she feels the warmth where she chewed up the caramel for him when he was a baby. But she’s selfish, a coward. I don’t think she’s an alcoholic. She’s the kind of woman who’ll want to drink you under the table. It was like you want to jump off the high board into the deep end and let it rip. Since it’s a comedy, I didn’t want to get too psychological about her. The main thing was being a fan of the first movie. I just wanted to hang out in the coffee shop and listen to these two guys (pointing to Tony and Billy Bob) talk to each other. I just wanted to stay there with them. I wanted to know going in, that I wasn’t upsetting the chemistry. It’s like seeing wonderful painting and saying, “Okay, this part’s for you and wanting to have the exact color and tone—all of that—so the painting is beautiful.”

Q: Talk about the chemistry between you and Billy Bob. Does that chemistry of mother and son pop out immediately or did you have to create it?

Bates: Well, we’re kind of from the same neck of the woods—Tennessee.

Thornton: Kathy’s from Memphis and I’m from across the river in Arkansas, so we have not only similar backgrounds, we’ve sort of parallel careers. We didn’t become movies stars because we were Calvin Klein models when we were 20 years old. We both became movie star-types by playing characters. So we have an understanding when you play a character, you can’t play it 70 percent of the way. If you’re playing Pat Boone, you’re playing Pat Boone. You can’t say, “Yeah, can I be more edgy?” You’ve got to play Pat Boone. If you’re going to play Charles Manson, you can’t say, “Well, I don’t want to look bad.” You’re going to look bad. We were taught that by people we revered. The reason we like those people is because they went all the way in. You can’t manufacture chemistry. We had worked together 20 years ago in “Primary Colors,” but we only had one scene together. It was really good to be around her every day on a regular basis (on this).

Q: Was Kathy Bates fun to be around on set?

Thornton: Absolutely. It’s funny because she’s one of the sweetest women in the world and because she plays these kinds of characters and I’ve played these kind of characters, sometimes when people meet us, they say things like, “Oh you’re so nice.”

Bates: I only have one regret: Because I love Christina (Hendricks), I wish we had some scenes together.

Hendricks: I know. We were across the room from each other in one scene.

Thornton: In my mind, they had scenes together.

Q: How important was it to have the original Thurman Merman back?

Thornton: Originally, the producers and various people of the first movie didn’t want Tony or Brett. They wanted two other actors and Terry Zwigoff (“Bad Santa” director), to his credit, came to me and said, “These people are insane. You’ve got to see these guys. Tony is funny and he’s perfect for it.” I agreed and got on Terry’s side and pushed that through.