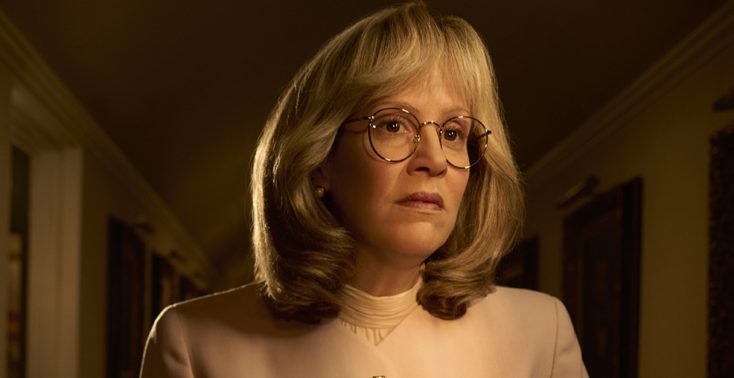 HOLLYWOOD—Seeing the title “Impeachment: American Crime Story,” TV viewers may assume the subject matter delves into last year’s partisan saga over 45th U.S. President Donald Trump—but the new FX limited series spotlights the impeachment of William Jefferson “Bill” Clinton, the first U.S. president in more than a century to face that indictment. In the series, the former Arkansas governor (portrayed by Clive Owen), who rose from obscurity to defeat then-sitting President George H.W. Bush in the 1992 election, saw his popularity sink when it was publicly revealed that he’d had an affair with White House intern Monica Lewinsky. The drama is told through the eyes of three women: Lewinsky (played by Beanie Feldstein), Linda Tripp (Sarah Paulson) and Paula Jones (Annaleigh Ashford), and shows how power lifts some and disposes of others.

Based on Jeffrey Toobin’s bestselling “A Vast Conspiracy: The Real Story of the Sex Scandal that Nearly Brought Down a President,” the miniseries is executive produced by Ryan Murphy and written by Sarah Burgess. Lewinsky also serves as an executive producer on the project.

Feldstein and Paulson spoke with the TV Critics Association via Zoom about their respective portrayals. Lewinsky and Tripp had been co-workers and friends at the White House before the latter exposed the affair.

Q: Beanie, what kind of research did you do? And given that Monica Lewinsky herself was involved to share her perspective, how did that assist you in your performance?

Beanie Feldstein: I had the great gift when I received the scripts. I knew that every word that I was saying was approved and had been to Monica first.  By the time it got to me, I was sure that everything in there was something that she felt comfortable with, felt was real to her life and represented her.

We were about to start when COVID happened, and we had months of waiting. It (gave me) time to dive in more; (reading) books, (listening to) the Monica/Linda tapes. For me listening to the tapes was very emotionally taxing. They are so raw and open.

Q: What was it like working with Clive Owen?

Feldstein: To get to work with Clive Owen was an extreme honor for me, as a young actor.  And our scenes together were just following Sarah Burgess’ roadmap and honoring what we knew from all of our research.

Q: Sarah, many people ended up hating Linda Tripp. What was your take on her?

Sarah Paulson: I don’t feel that way. Obviously, Sarah (Burgess) doesn’t feel that way. I certainly think (Linda’s) choices are questionable, at least. But in terms of her being unlikeable, I just don’t share that view.

Q:  I do understand the need to pity her.  It seems like she’s very upset that she’s not being recognized and respected in her profession.

Paulson: For full disclosure, we just finished shooting yesterday and I’m obviously still feeling incredibly protective of this woman that I tried to inhabit for the last 10 months. So, forgive my emotionality around it.

Q:  Beanie, how often did you talk with Monica, and what kind of things did you want to know?

Feldstein: Monica and I had one in-person meeting before the Coronavirus. It was about three days before the world shut down. Thank God both of us were healthy at the time. We had a beautiful kind of “get to know you.” Because of Coronavirus, throughout the process, she was not able to be as present on set. We had more of a friendship than we do a working relationship. She was really giving with me, in that she would answer anything I had questions about. But it was easier and more useful for me to just be around her spirit and text her. We would send videos to each other. I made it very clear to her when we started filming that I saw myself as her bodyguard. I was like, “I’m going to protect you. I have your back. I know your heart.”

Q:  Did anything surprise you? Did you think, “Oh, she’s not like I thought she would be?”

Feldstein: I was in a really great position, because I was extremely young when this happened. I learned this story through my research, through reading every book, watching every tape. I was as blank of a slate as you could possibly have, given that this is such a known story and a huge American historical moment. I didn’t have my own preconceived notions. I understand completely what we were up against as far as what people thought of her at the time. It was deeply important to me to unravel that and redeem her. But personally, no, nothing really surprised me.

Q:  Sarah, how long did it take to do your make up and prosthetics?

Paulson: Mine was about three-and-a-half hours every day. Sometimes three hours and 45 minutes, depending on how much sleep everyone got that day and how well the application was going.

Q:  Will you be able to actually sit down—maybe you have already—and watch the show as yourself and enjoy it?

Paulson: I sure enjoy everyone else’s performance. I don’t care about mine. I always have a hard time watching myself, for as long as I can remember. But it is a great joy to watch what everyone else on the show is doing. I think everyone is so marvelous.

Q: Beanie, in episode six the Office of Independent Counsel detains and questions Monica for 12 hours. What was it like for you to shoot that episode?

Feldstein: Luckily for me, Ryan (Murphy) wanted to direct that episode himself. He was my guiding light through all of it. It’s almost unbelievable what she had to go through, the strength that she conjured up, the emotionality that was within her. The pain she was in, (with) the two women being in the same room together for the last time.

Paulson: I love you, Beanie.

Feldstein: I love you too. I’m so grateful to all the men in that room. It’s Monica alone with eight to 12 men at any given moment. Colin Hanks (who plays deputy prosecutor Mike Emmick), all the FBI guys and the Office of Independent Counsel were extremely gracious scene partners. Ryan was remarkable at leading me through that experience. We wanted to make sure that no scene felt the same. She’s really on a roller coaster. So, you can’t be at one point the whole time; you have to dip down and come back up. But every time it got hard, I would just say to myself, “This is for Monica.  So, you have to dig deeper and do it again.” That was my dialogue with myself.

Q:  If one word can be used for this entire series, it’s “trust,” and its implications. How did that inform the characters that you played?

Paulson: You will learn this as the series goes on. There was a very early breach for Linda inside her own family. The consequence and the fallout of that, in terms of who you become, depends on a lot of factors. As Linda’s life goes on she’s consistently feeling forgotten, unseen and invisible, especially when she feels she’s devoted so much of her life to the institutions that she finds to be obviously fundamental to our way of life, and of paramount importance to be treated with extraordinary respect. That’s another word (respect) I would use too, but maybe that pertains mostly to Linda (and) the consequence of her broken trusts that happened earlier in her life. (She also felt) forsaken in her work environment.

People can go 20 ways, right? Linda went the way of an unconscionable choice by way of friendship.  But she believed so wholeheartedly that she was doing something for a greater good. I say “wholeheartedly.” This is such a bigger conversation I’m afraid I don’t have enough time to say all I want to say about it. It is a very interesting point, and I think a great umbrella word that the show sort of lives under. Beanie, save me.

Feldstein: Monica is deeply loyal to everyone that she comes in contact with. And much like with Linda, throughout the series, you learn more about her familial relationships, her previous romantic relationships, and how they’ve all led her to this moment in her life.

I think Linda is actually quite charismatic. I think that’s very important to understanding why these two developed such a deep relationship. They’re both women that want to not be invisible. They’ve been ostracized. They’ve been ousted to the Pentagon, and they both need each other. They’re taken with one another. The central relationship is not Monica and Bill. The central relationship is Monica and Linda. And it’s the story of their coming together, their discovery of one another, and then their eventual parting ways, of course, with this huge, unbelievable betrayal.