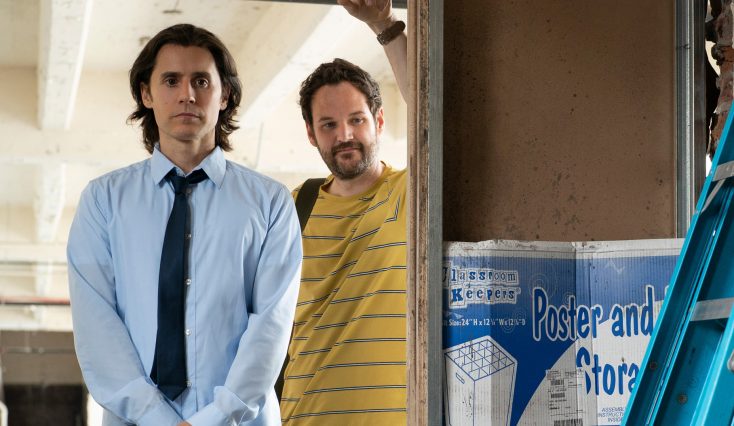 HOLLYWOOD—Based on the successful Wondery podcast, “WeCrashed” comes from the co-writers, executive producers and co-showrunners, Lee Eisenberg and Drew Crevello.

The eight-episode limited series tells the fascinating story of the downfall of WeWork, and stars Academy Award winners Jared Leto (“Dallas Buyers Club”) and Anne Hathaway (“Les Miserables”), as WeWork’s co-founders Adam and Rebekah Neumann. In 2010, Adam co-founded WeWork, a company which, in less than 10 years, grew from a single co-working space into a brand that was worth $47 billion. Less than a year later, the business crashed.

The series premieres on Apple TV+ Friday March 18, with three episodes, followed by a new weekly installment through April 22. Hathaway and Leto joined the TV Critics Association, virtually, to talk about their new drama.

Q: What was compelling about these characters that made you want to be part of this project?

Anne Hathaway: I was unfamiliar with the story when it came to me, and I became very interested in this idea of the mentality that people have that doesn’t let them see the world that other people see.

As I got to know (the producers) Lee and Drew, I began to realize that this was a really serious team. They told me that Jared Leto was involved, and I realized this was a team I wanted to very much to be on. And then as we got deeper into it and realizing the depth of the love story, that’s when it went to a new place for me.

Jared Leto: I was familiar with WeWork.  I had been to some WeWorks and I thought the spaces were incredible. I remember hearing about this huge success story, and the fact that it was valued so high, and that they all of a sudden were confronted with these enormous challenges. I was happy to hear that (Lee and Drew) didn’t want to just make a takedown piece that vilify people and (to) really look at this nuanced story and dig in deep to character.

Q: Anne, how would you describe that mixture of a great dream and it all going wrong and the character of these people?

Hathaway: The goal of the series is to have people draw their own conclusions.

Q:  But you had to draw a conclusion to play her.

Hathaway: I did, but I don’t necessarily want to share that conclusion. What we aspired to do with this was to present a story as fairly as possible and to not assume the worst of people; to explain that just because (a person thinks in a certain way that) we might disagree, doesn’t automatically make them bad.

Certainly in the first episodes everyone’s going to see, that these are people who had very sincere intentions. I really think they wanted to make the world a better place.  How they executed that is a lot more complicated.

Q:  Jared, do you think this guy was a dreamer who just didn’t know how complicated his dream would become?

I love that this story is the story of an immigrant who comes to this country and really wrestles his dreams into reality.  I think that’s a pretty fascinating thing.

This is a painting.  It’s not a photograph.  It’s not a documentary.  So it’s impressionistic.  When you play a real-life character, I always feel like you have an obligation to do the work, dive deep and to bring that person to the screen with as much dignity and grace as possible.  So that’s what I did in this scenario.

Q: Jared, it’s a very tough accent, the Israeli accent into English. How did you get it without slipping into a caricature?

Leto: I think probably the insurance against things slipping into caricature is to dive into as much truth as possible. And, in this case, I had a great team of Israelis surrounding me that I was working with. We had our own bubble and so that the voice and that accent was around me all the time.

The good thing about Adam is there was a lot of material out there. So we had hours and hours of footage. It was beautiful just to be buried in the interviews. He was very verbose.

Q: Anne, how did you study to get Rebekah’s essence?

Hathaway: I did study her a lot. During the rise of WeWork Rebekah gave a series of interviews. She’s always been very generous in terms of sharing the wisdom that she’s learned. She’s very interested in spirituality, sharing the books that she’s read, so I really immersed myself in those.

I also worked with a woman named Amy Hammond, who’s a researcher, and she gave me amazing research on Rebekah’s life, on Rebekah’s world. It is a world that I was not born into, but I am familiar with, and then I just did my own investigative reporting. I would find people that knew her, and I would ask them questions. It was very interesting to hear people’s experience with her versus the way she’s portrayed in the media. There’s a big difference there.

Q: Gwyneth Paltrow, because she was Rebekah’s cousin, is mentioned quite a few times and almost feels like an unseen character in her life. Can you address that?

Hathaway: I think that Gwyneth is someone who gets a lot of attention from the media, and she’d probably prefer I just say we’re good and leave out the details of that.

Q: Jared and Anne, can you talk about working with each other?

Leto: The opportunity to work with Anne; I was in. She’s just incredible. There was a lot to learn from [her.] She was a terrific partner.  And we went on this wild journey together.

Hathaway: I have to compliment (Jared), because all of that prep didn’t ignite for me until he walked on set and began speaking in that wonderful voice. I remember being so excited both as myself and as Rebekah. The placement that he found of all of that work that he did, I realize there’s a difference between an accent and a voice. He had found a voice and, all of a sudden, I opened my mouth and Rebekah’s voice came out. In that moment we found each other on some acting level as the characters, and that was when the project really opened up and she became real for me.