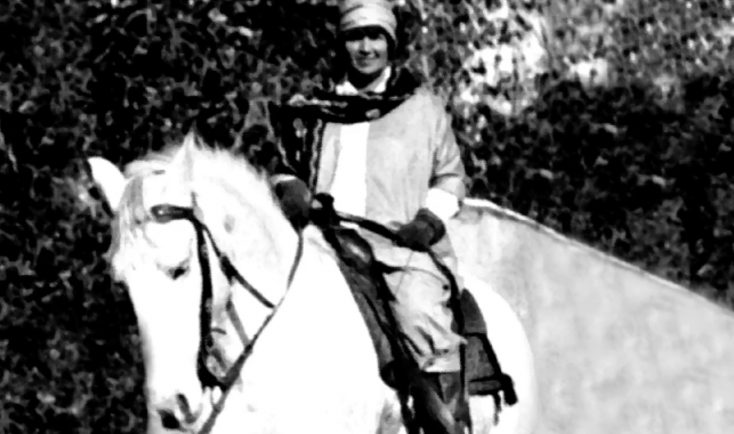 Ali MacGraw at the Film and Music Experience. ©Daryl Custer.

ALBUQUERQUE, N.M.— “All that Hollywood ******** doesn’t cut it here. What a luxury!” Oscar nominee Ali MacGraw (“Love Story”) says before a packed house at the Albuquerque Film and Music Experience.

MacGraw, now 78 and a resident of Tesuque, N.M. for the past quarter century, credits the candid reality of the people in the state for helping her find her true self.

“The greatest gift any of us has, if we can be kind at the same time, is to be real and I think that’s the coin of the realm here (in New Mexico),” she says.

The former wife of Hollywood legend Steve McQueen is on hand here to promote “Awakening in Taos: The Mabel Dodge Luhan Story,” a documentary film she narrates. She explains that the subject of the doc was a mover and shaker in the northern New Mexico arts and culture scene in the 1920’s, ‘30’s and beyond. She also was and remains a great inspiration to anyone wishing to live a kind and authentic life away from big city bustle.

“Luhan’s story is a revelation about how much extraordinary culture and how many amazing people came to New Mexico in the 1920’s and ‘30’s to create what we all take for granted now,” she says. “That was really a turning point for this part of the world because of this woman.”

MacGraw, a beauty and fashion icon of the ‘60s and ‘70s, remains graceful and meticulously dressed. She regards her acting heyday in films like “Love Story,” “Goodbye, Columbus” and “The Getaway” (in which she co-starred with McQueen) a freak accident.

“I’m from New York, (and) then a fluke happened and I wound up in Los Angeles making a living. It wasn’t my dream or anything. I wasn’t prepared for it on any level. I hadn’t studied. It’s not something that I do well. I’m not being coy. There are people who do it really well. I had a career that I think was more like a pop star. There’s a big difference. That’s all fake.”

A chance meeting on a flight to Los Angeles resulted in MacGraw’s involvement in the “Awakening in Taos.”

“I sat on a plane with director/writer Mark Gordon and had an accidental conversation,” she recalls. “I’m the kind of person who doesn’t talk to anybody on a plane. I have to hope that the book I hold is right side up so they really believe I’m reading. (Gordon) happened to talk about beginning a project about Mabel Dodge Luhan. It just so happened that I had finished reading her book “Edge of Taos Desert: An Escape to Reality” the day before. I was an art history student at university and the major star artists in this story I was familiar with, but this book just stopped me cold in my tracks. I never thought of it in terms of any kind of movie thing. I love to read and this is my big present book to anybody who comes here. This book (results in) an unconscious reflex action. It’s breathing.”

MacGraw says she feels that the book should be read by anyone interested in the culture of New Mexico.

“I was on fire about it,” she says. “I imagined that my own trip from New York, then Los Angeles and, finally, to New Mexico had some of that ‘layers peeling’ that is so beautifully expressed page after page in ‘Edge of Taos Desert.’”

MacGraw’s fondness for the story of a high society woman who left it all behind and brought a string of well-known followers to the Land of Enchantment, caused her to volunteer her time.

“I said to Mark, ‘You’re making a documentary? How great. I think this woman is astonishing and if you ever want a woman to narrate it, I’d be so thrilled if I could do it,’” she recalls telling her seatmate.

The actress says she identifies with Mabel’s search for freedom in a time when most women were silent sidekicks to their husbands.

“Mabel, wrapped up in her Victorian, black stuff and sitting on this train bumping across America to meet her son, says to her husband, ‘Go paint some Indians and take him with you,’” she says. “She started unbuttoning that salon-giving (woman) who had a Di Medici villa in Florence and a terminally chic group of people in Washington Square, and it’s pretty much what most of the women I know who are foreigners here have done.”

Luhan invited ultra-famous artists and writers of her time to visit her little pueblo in Taos. The men usually came and went but many of the women stayed.

MacGraw explains, “Here, there isn’t one answer to the question ‘How are you?’ ‘Fine, thank you, and how are you?’ Here, the question is, ‘How do you really feel,’ and we get to say so. I felt ever since I moved here that New Mexico is an extraordinary place, particularly for a woman to be. I’ve travelled a lot and lived in a lot of different places. There is something remarkable about the power and the individuality and creative guts of women in this part of the world.”

The filmmakers are using “Awakening in Taos,” intended for PBS distribution, as a calling card to tell a bigger story. Writer/director Gordon envisions a scripted miniseries in the future. Something like “Downton Pueblo.” MacGraw would be completely onboard with that.