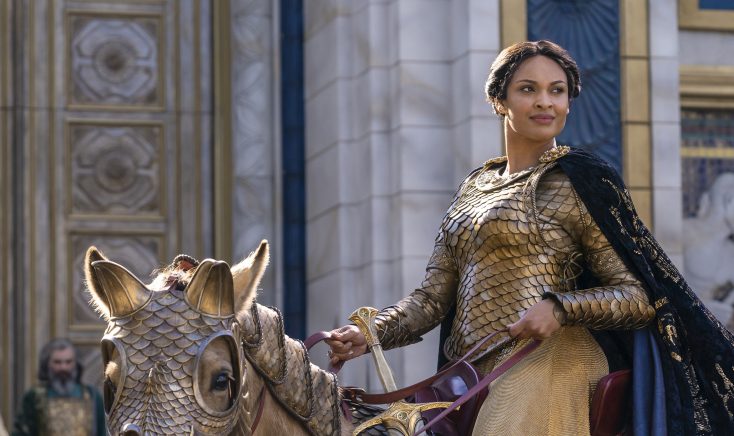 (l-r) Robert Aramayo as Elrond and Morfydd Clark as Galadriel in THE LORD OF THE RINGS: THE RINGS OF POWER. ©Amazon Studios. CR: Ben Rothstein/Prime Video.

The series premieres on Prime Video in more than 240 countries around the world, in 32 languages, on September 2, with new episodes available weekly.

Question: Can you talk about getting to grips with the green-screen acting? Cynthia, I know with “Spartacus” you had some experience with CGI.

Cynthia Addai-Robinson: I would love to speak to this just because I had two very interesting experiences, “Spartacus” and “Rings of Power” both filmed in Auckland, New Zealand.  With “Spartacus,” that was entirely on stages and entirely in green screen. So I actually never filmed a single frame on location in New Zealand.

There are a lot of technical elements but, to be honest, I predominantly work within Númenor, and Númenor is a fully-built, fully-functioning city with a dock and boats and other elements. So it was an interesting experience to get to work in what felt like a real world within Middle-earth versus what I experienced previously.

Owain Arthur: It was exciting getting to do green screen. I’ve done a little of it before. But we really experienced it and we got to try as many methods possible to play with that.

I play a dwarf and [Robert] is Elrond who is much taller. So [with] the height difference, I was often on my knees and Rob was often on the top of a ladder. That was the best kind of option. But there were moments where Rob had to jump on a small version of the set that we were in.

Robert Aramayo: I think the most difficult part of the green-screen work was when you had to match what you did on a smaller version of the set. That’s where it gets really challenging. But I think what was good about it was [Owain and I] were just in it together. It’s a very close friendship in the show and I think all of that helped.

Morfydd Clark: Every character here had either a stunt double or a scale double. These characters belonged to numerous people behind the scenes, and particularly the scale doubles. It’s a relentless job and you’re working with them for the entire show.

Q: Morfydd, we are shepherded into this series through your eyes at the beginning.  Can you talk about the conversations you had about what you wanted to get across with this character?

Morfydd Clark: We all had a lot of time to do lots of research and discuss it with each other. It’s very interesting to be able to play a magical creature and immortal creature. That is something I could talk and think about forever. Unfortunately, not forever because I’m not immortal (they all laugh.)

I can’t remember the exact quote, but Galadriel says something that alludes to, “With wisdom, there’s a loss of innocence.” That was really formative for me in terms of what does it mean to have innocence as a creature that’s already been alive for thousands of years? So that was something I really worked with. And I think she has a unique perspective because she is history, and so she can’t escape her history. To play a living myth was wonderful. We spoke a lot about immortality, me and Robert because Rob’s a little baby elf.

Robert Aramayo: He’s only a few hundred years old to you.

Q: Why do you think Tolkien’s work continues to resonate with audiences?

Robert Aramayo: One of the things that I’ve been thinking a lot about recently is how much he talks about his work [resonating] with being disconnected from the natural world. And I think all of those themes in his writing are beautiful and can help us today.

Morfydd Clark: Yeah, and I think also it’s not good versus evil with Tolkien. It’s hope over despair. We had the pleasure of going to Comic-Con a few weeks ago. That was a really amazing moment for us all, because it really hit home how huge and long-lasting his affect is. And just to be in a group of people who had all been given respite from the world through fantasy was really wonderful.

Q: Robert, I don’t mean to put you on the spot, but you played young Ned Stark in “Game of Thrones,” you’re playing Elrond in this. When people say there’s a rivalry between the “Game of Thrones” universe and “The Rings of Power” universe, what does that mean to you since you’re such a big part of both of them?

Robert Aramayo: I don’t feel rivalry between [them,] not for me anyway. I’m really excited to see [“House of the Dragon.”] It’s going to be awesome. I love that world. I love this world. But I feel personally like the tapestry and the colors of both materials are so different, it feels quite different to me. I love fantasy, and so now we all just get to watch more fantasy, which can never be a bad thing.

Cynthia Addai-Robinson: As a cast, we got to see the first three episodes altogether, which was lovely. One thing that really struck me is it felt very distinct. I truly felt as we watched the show, that there isn’t anything else like this on right now. This doesn’t look like anything that’s come before. I think we really get to stand on our own two feet with this one.

That sense of rivalry, I feel that’s something that’s just generated. None of us feel that way. If you’re a fan of fantasy or if you’re just a fan of good storytelling, this is a boom time for you. You just get lots of good shows, lots of good stories.