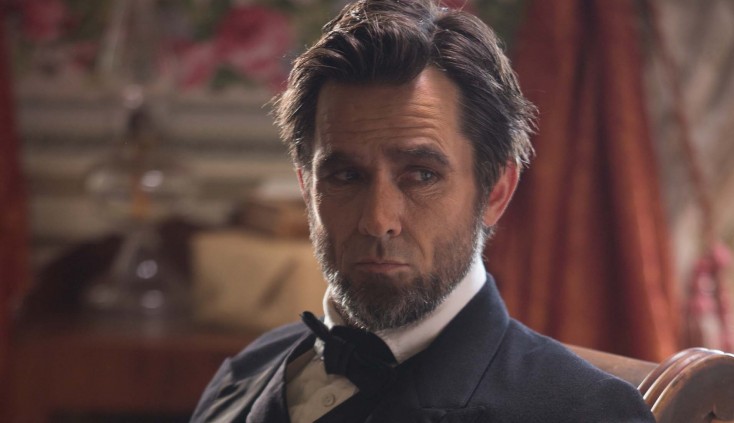 Taking on the formidable role of Abraham Lincoln is Billy Campbell (“Once and Again,” “The Killing”). A history buff, and a Civil War re-enactor, Campbell jumped at the chance to portray the 16th president.

The film, narrated by Tom Hanks, offers fresh historical insight as it chronicles the final days of Lincoln’s life as well as the treasonous assassination plot by John Wilkes Booth (Jesse Johnson), who became one of the most notorious villains in American history.

Campbell spoke at the Television Critics Tour about his challenging new role.

Q: Have you seen any performances of Lincoln that really have stuck with you?

Campbell: I was thinking about this the other night, and I think the closest I can recall was either Henry Fonda or Gregory Peck. I purposely haven’t seen anything recent. (He laughs.)

Q: Did you have to do anything physically to transform yourself into Lincoln?

Campbell: I found out about the job a week before I was supposed to be in Richmond.  I didn’t have time to do anything. I would have loved to have had six months and lost 50 pounds. That would have been great.

Q: How much weight did you feel on your shoulders playing Lincoln?

Campbell: I felt almost no weight at all. The script was so brilliant and so deep in its own way. I felt very safe in the hands of people who felt passionate about doing this in the right way.

Q: You’ve been a Civil War re-enactor. Which side did you “fight” for?

Campbell: I was part of the 19th Virginia Rifles. So I re-enacted for the Confederacy. But a lot of us flip-flopped. I had uniforms for the Union as well.

Campbell: Yes, I played General Pickett in “Gods and Generals.” I played a fictional character, Lt. Pitzer, in “Gettysburg” and my friend Stephen Lang played General Pickett in that. And then he got upgraded to (Lt. General Thomas “Stonewall”) Jackson for “Gods and Generals,” and I got upgraded to Pickett.  When we shot “Gettysburg,” I only had five or six scenes, but I stayed in Gettysburg and camped out and re-enacted the battles for months.

Q: Doing this, was there anything that you discovered about Lincoln that you didn’t know?

Campbell: The thing that I came away with more than anything else was the sense of him as a warm, everyday human being. Over the years, obviously, he’s been canonized, and I have really tended to forget that he was a living, breathing human being in the day. He was very approachable and very empathetic. He was really kind of a radical, to tell you the truth. He grew up as a child on the frontier, chopping wood, where people cursed, drank, spat and owned slaves. He didn’t drink, curse, use tobacco or agree with slavery. He was self-educated and read voraciously. Even though his father scorned reading, he insisted on reading. That’s a pretty strong personality.

Q: Because of your interest in history, is it extra enjoyable when a project like this comes along?

Campbell: Absolutely. This was like heaven for me. Being in Richmond, I was 60 minutes away from home, so I got to see my family. As a child, I grew up running around barefoot on Civil War battlefields, and I got to go back to Richmond, which is an incredibly historic place, it’s dripping with Civil War history. I got to dress up as Lincoln and walk, stand and sit on the very same spots that he did.

Q: Is there a specific scene where you stood where Lincoln did that you recall?

Campbell: There’s a scene where Lincoln comes to Richmond. A sitting President going to the rebel capital that had been vacated for two days, walking around the streets (was unheard of). He went to the capital of the confederacy and he went into Jeff Davis’ office and he sat in Jeff Davis’ chair just to feel what it was like.  I, dressed as Lincoln, went to the actual capital of the confederacy, into the actual room and sat in the actual chair. It was amazing.

Q: Was there anything about Lincoln’s assassination that surprised you?

Campbell: They did a lot of research for this and yes, there was a lot of stuff. Of course, I’ve read about the assassination but Erik’s (Jendresen) script is the most detailed reading I’ve done on the assassination of Lincoln, and so almost all of it was fairly new. I learned who was in the box (at the Ford Theatre with Lincoln), and what exactly happened. It was tremendous.