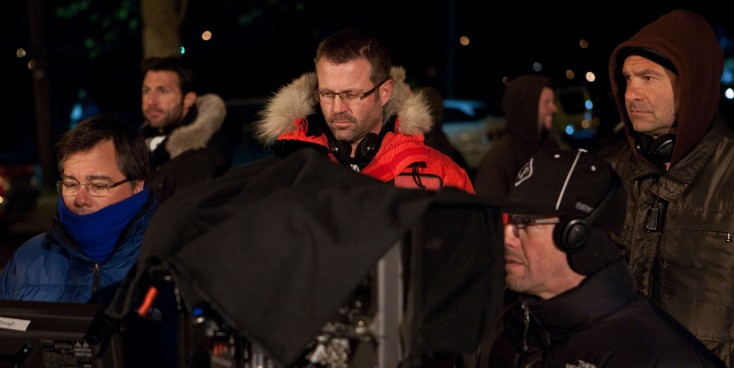 HOLLYWOOD—Ric Roman Waugh directs Dwayne “The Rock” Johnson in “Snitch,” an edge-of-your-seat action thriller about a man who makes a deal with the feds to go undercover and infiltrate a drug cartel in order to spring his teenage son, facing a mandatory 10 year sentence, from prison.

The son of Fred M. Waugh, a professional stuntman who stood in for the likes of John Wayne and Charlton Heston, the younger Waugh grew up on movie and TV locations. He began his Hollywood career as a stuntman, and eventually turned his sights on storytelling by becoming a screenwriter and then a director.

The filmmaker says he wants to tell stories that both entertain and spur discussion with audiences.

“I want that water cooler conversation about the movie itself,” he says by phone.

As the father of twin 5-year-old boys, Waugh says he was hooked by the story’s familial them, and the lengths a parent will go to protect his child. He discussed those themes with Johnson, who also is a parent.

With Johnson onboard, Waugh says he was able to assemble an all-star cast including Benjamin Bratt, Susan Sarandon, Barry Pepper and Melina Kanakaredes.

Q:  What made you think of casting Dwayne for your lead role?

Waugh: I’m very passionate about the movie and even more passionate about making the movie with him. When I came onto this movie, we started talking about the usual suspects you’d put in the picture, and Dwayne and I wanted to work together. He was a big fan of “Felon,” luckily for me, and I was a big fan of his. He’d never gotten his shot at doing something that was really his “The Fugitive” or “Ransom.” Something where you go from being the big action hero, the larger than life character, to a man of action. I talked to the studio and said I’ve got this great idea—what if we take the most formidable guy on the planet and walk him into this movie and show you when it’s real world rules, it will not matter how big you are? When a bullet hits you in the head, you die. It all becomes about how much heart you have when you go into a world that is so scary, that assesses you and finds you either as an asset or full of crap. If you’re full of crap, you’re dead but if you’re an asset, they go “This is great. We’ll tell you this is a one-time deal but we’re going to get our hooks in you and drag you on this ride as long as we can and exploit you for everything you have.”

Q: Did you talk to Dwayne about what lengths you’ll go to to protect your child?

Waugh: Yeah. We talked a lot about family and how this is an important story to tell, and do it authentically. We wanted to show there aren’t perfect families anymore and it’s OK because when kids are in jeopardy, everybody circles together and puts their differences aside to protect them. The bigger theme Dwayne and I talked about that I hope people take away from this movie is the price of our own success versus personal attention to our family and kids. As we seek to provide material things for our kids, we find ourselves not at home as much. He plays a father who’s put a new family together but he’s trying to connect with his estranged son and then this catastrophe happens where he has to reconnect with his son. It’s about family and trying to protect what’s most important to us, which is our kids.

Q: Did your previous work on “Felon,” about a family man, who winds up in prison after killing an intruder in his home, help you tell this story?

Waugh: Yes. Knowing the criminal world so well and the law enforcement world, I wanted to set up this journey for Dwayne, to put him in a situation where people are going to buy the danger and the realism. It had to have the authenticity to carry it forward. I’m proud to say, he gives the performance of his career. He’s just fantastic in the movie. He’s the anchor of the entire picture. He tackled it with such ferocity. He’s so fearless with true authenticity. It’s a testament to who he is as a superstar, because the minute we put him in the movie, the rest of the cast fell into place. That speaks to who Dwayne is and knowing what this movie can be.

Q: Is there an underlying message theme about the justice system that you’re trying to express through your films?

Waugh: I don’t want to be one of these filmmakers that hit you over the head with my agenda or my opinion. I just want to take you down the 50-yard line and let you form your own opinion of what this controversy is about. You might be in favor of the minimum mandatory sentencing (for federal crimes like drug trafficking) when you come out of this movie. You might say, “I get what happened to this kid and this family.” I want those conversations. For me, it’s about social relevance. I want to make a movie that has some type of relevance where as the audience can’t help but relate it in some way, and to continue that conversation outside the theater. In “Felon,” one of my proudest moments was when they were sending me feedback in some of the chat rooms, and people would respond say “this happened to my father” or “this happened to me.” That’s what I want.

Q: The title, “Snitch,” evokes a certain negative connotation. Did the title seem obvious or did you struggle with it?

Waugh: Before I came on the movie, they already had the title. I can tell you there were a lot of conversations about it. A lot of people were skittish about it. At the end of the day, when we were finished with the movie, the subject of the title came up again and I said, “That’s why the title is perfect for this movie, because it is a dirty word.”  It’s about how the judicial system uses snitches to their advantage. It’s about the art of coercion, and how it’s a domino effect across the board. One of the themes of this movie is in this world of snitches or informants, it starts in the U.S. Attorney’s office at the top of the food chain and it works its way through where a mandate is passed, and it’s the (district attorney’s office) that is coercing this person to cooperate with them. That person then has to coerce somebody to help him and suddenly, you end up from the good guy’s point of view all the way to the antagonist’s point of view, someone is doing their own form of coercion or being coerced. It’s such a massive tapestry that happens. We’re not glorifying it; we’re actually showing it for what it is.

Q: You started as a stuntman and your dad was a stuntman. What do you think your background lends to you being a filmmaker?

Waugh: I had a very blessed journey with the upbringing I had. When you’re working on sets as a stuntman, you have a firsthand account of the dynamics between actors and directors, because you’re working hand in hand with them. You’re not sitting outside the process watching. You become part of the process. You also see your tradecraft and see how movies are made. (The late filmmaker) Tony Scott was one of my mentors, and when you’re sitting on the set watching this legendary filmmaker work, you think, “wow, I never would have thought of doing it that way” or “That’s how I would do it.” It hones in on who you are as a filmmaker. As much production experience as I had, I think writing is where it became the full war chest for me. I got to write a ton of movies and be a part of the development process and the narrative process and understand and learn about character arcs, tone and structure. I made “Felon” for $2.7 million and was given 21 or 22 days to shoot it. I had to figure out how I was going to be able to make it. Fortunately, I had all that production experience. It’s been a longer journey for me to get where I’m at but I’m very proud of it because it all accumulated in me being the full package. I want them to be commercial, fun thrill rides but I also want them to have substance to them. The fun part is knowing how to roll up your sleeves and get it done.

Waugh: I just came on to (the sci-fi thriller) “Tipping Point,” which is in the development stage and I’m starting to rewrite it. I’m meeting with futurists for lunch and forward-thinking architects to talk about what our future is going to look like if we go fully green and if our planet’s population grows to over 12 billion, how are we going to sustain ourselves as a planet? In the interim, I’m going to do this movie called “Currency,” which is a story about how one of these special ops guy (comes back from war) and gets a job with the Secret Service counterfeit division, where he starts looking at these accidents happening where people are stealing the real elements to make $100 bills. He sees these are tier-one tactics. It becomes like “Heat,” where he has to go up against his own guys, but what price do you pay when you have to hunt down your own.

Q: Do you remember the first time you were on a set?

Waugh: Only from the pictures. It was on (the John Sturges directed police drama) “McQ,” with John Wayne. I don’t remember it but I have the pictures. My dad was (stunt double) on “The Amazing Spider-Man” in the 1970s on TV. I remember going on the set when I was 7 years old. I was on the set of “Wonder Woman” and “Charlie’s Angels.”