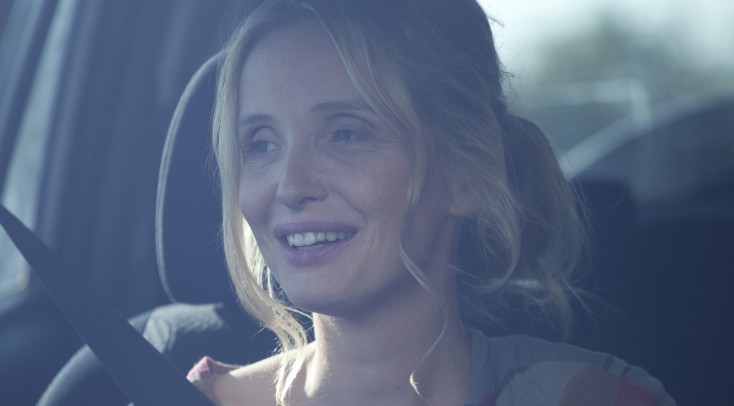 HOLLYWOOD—Julie Delpy is feeling a bit apprehensive. The French actress, who now lives in Southern California with her longtime beau, German composer Marc Streitenfeld, has work obligations all day, so she has enlisted the nanny to pick up their 4-year-old son Leo from preschool.

“It’s the first time in my life that someone else is picking him up, so I’m nervous,” the mother of one confesses during an interview.

“Delegating is not something I’m used to doing,” she goes on to admit. “We don’t have a lot of help around the house, so I’m terrified, actually.”

The 43-year-old beauty soldiers on, though, maintaining a positive attitude and a lighthearted sense of humor throughout an interview to promote “Before Midnight.” Dressed in a short-sleeved black dress, she is wearing little makeup, and her long, wavy blond hair falls loosely around her shoulders.

Delpy grew up in a show business family. Her father, Albert, was a theater director and her mother, Marie, was an actress. Her parents, she says, were hippies. They named her after actress Julie Christie and the title character in the August Strindberg play, “Miss Julie.”

“That was really dark of them because she kills herself at the end,” she says with a laugh.

“Before Midnight,” set in bucolic Southern Greece, opened in limited release in late May and is rolling out gradually. Delpy is particularly excited to be promoting this film, which reunites her for with director Richard Linklater (“Dazed and Confused,” “Bernie”) and co-star Ethan Hawke (“Gattaca”).

In a summer of sequels, “Before Midnight” stands apart as a timeless intimate drama that has no explosions, car chases, or special effects. It simply unveils the third chapter of the captivating relationship between Celine and Jesse, played to perfection by Delpy and Hawke.

The couple was first introduced to movie audiences onboard a European train in 1995’s “Before Sunrise.” A Hollywood unknown, Delpy played Celine, an idealistic college student returning home to France after visiting an elderly relative in Eastern Europe. She met Jesse (Hawke), a freewheeling and somewhat cocky young American preparing to return home after a breakup. The two travelers had an immediate attraction and, on a whim, decided to spend the day in Vienna, where they proceeded to take in the local sights, engage in philosophical conversations, and embark on a whirlwind romance.

Though “Before Midnight,” directed and co-written by Richard Linklater and Kim Krizan, wasn’t a box office hit, it became something of a cult classic among hopeless romantics, with its smartly written dialogue, believable performances, and beautiful setting.

It ended bittersweet, with Celine and Jesse going their separate ways after a magical night together. No one, though, was ready to say goodbye. The actors and the director reconvened nearly a decade later to make a sequel. “Before Sunset,” released in 2004, found Celine and Jesse reunited unexpectedly in Paris. Older and wiser, the two were in the prime of their lives. Jesse had written a novel based on his magical day with Celine and Celine had established in her career and was a budding musician.

Delpy and Hawke, more experienced and mature as performers and filmmakers, co-wrote the sequel with Linklater, who returned to direct. After a magical day of walking around the City of Light, the romantic drama ended with married Jesse listening to Celine playing a guitar in her apartment, with the implication he was there to stay.

In “Before Midnight,” another nine years have passed and Celine and Jesse are living together with their twin school-age daughters. Jesse is a successful novelist, and Celine is a dedicated mother and environmentalist. They are enjoying the waning days of a vacation in Greece’s Peloponnese region along with Jesse’s son from his marriage. While their life seems perfect, cracks in the couple’s relationship emerge as the story unfolds. Their suppressed frustrations erupt in a no-holds barred argument during what is supposed to be a romantic evening.

As with the previous “Before” films, “Before Midnight” tells the story in a series of long, uninterrupted scenes filled, with dialogue (again co-written by Linklater, Delpy, and Hawke) that anyone who has ever been in a long-term relationship can relate.

Delpy says she and her collaborators drew from personal experiences, but adds that the trio’s process of writing the screenplay is complex and not easily explainable.

“We have to think about their back story every time we start to write the screenplay,” she says in near-perfect English, with only a hint of a French accent. “You can’t start writing the second screenplay or the third screenplay without knowing everything about what happened in-between.”

Naturally, she is protective of the Celine character, since it has been part of her life for nearly two decades.

“I want to make sure Celine is depicted as a strong woman,” she says. “She’s looking towards the future. She’s not someone who dwells in the past, and she’s a very active person. She can seem at times vindictive, but she’s not going to let someone tell her what to do or how it should be done.”

The main sticking point between the onscreen couple is that Jesse wants to move the family from Paris to Chicago to be closer to his son (who lives with his mother), while Celine has no desire to live in the U.S. She also has a pending job opportunity in Paris that she doesn’t want to pass up.

She explains Celine’s hesitation this way: “She believes that if they move to Chicago, it will destroy their relationship, and I personally think she’s right.”

Asked why the films have such a dedicated fan base, Delpy surmises it is because she and her co-writers have tried to create realistic, fully developed characters.

“Richard, Ethan and I have tried to make sure too that she’s not depicted simply as ‘the wife,’” she says. “Otherwise, the relationship is out of balance. It would be a film about a guy who has a nice French wife. It was very important for us for it to be balanced, that it’s not a macho movie or a feminist movie. It’s very balanced, in that sense.”

As with the previous two films, the ending in “Before Midnight” is intentionally ambiguous. Viewers have to decide for themselves whether Celine and Jesse stay together or go their separate ways. Having completed the trilogy, Delpy is uncertain whether a fourth installment will happen in another nine years.

“I have no clue,” she says with a shrug. “This could be it. We made three. That’s a lot already.”

So what’s next for the busy actress? After enjoying some success as a filmmaker with the 2007 comedy “2 Days in Paris,” which she wrote, directed and co-starred with Adam Goldberg, and last year’s follow up, “2 Days in New York,” co-starring Chris Rock, she’s ready again to go behind the camera.

“I’m writing a screenplay and hopefully shooting it next spring,” she says, smiling. “I have so many projects I’m writing. I’m hoping to finish them by the end of the year and then shoot as many of them as possible in the next few years.”