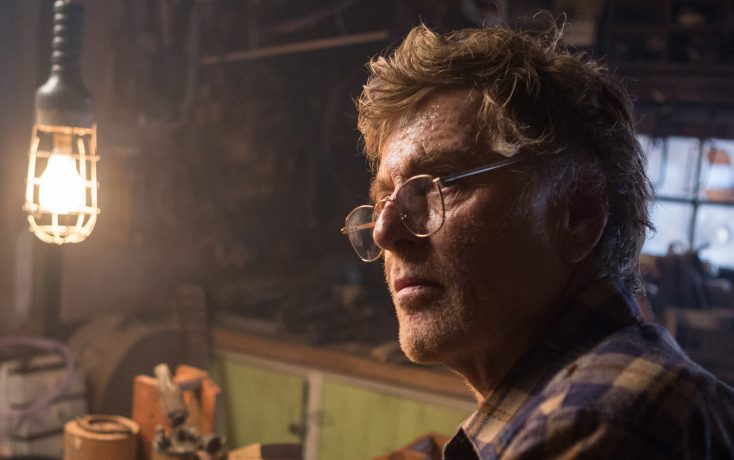 HOLLYWOOD—On August 18, Robert Redford turns 80. Yet the two-time Academy Awards winner (one for directing “Ordinary People” and an honorary award for his contribution to the independent film industry through Sundance) feels as though he’s just hitting his stride as an actor.

“I’m in a period of my life where I like to act,” he explains during a recent interview, dressed casually in a black pullover and jeans and a light jacket, his blondish-grey hair tousled like he just wandered in from the ranch.

Best known for his iconic roles in “Butch Cassidy and the Sundance Kid,” “The Sting,” “The Way We Were,” “The Natural” and more, Redford has even jumped onboard the Hollywood superhero bandwagon playing the main antagonist Alexander Pierce in 2014’s “Captain America: Winter Soldier.” The native Southern Californian was a heartthrob in the 1960s and 1970s, but also proved to be more than just a pretty face. He tackled a range of roles as an actor before adding director and producer to his list of substantial accomplishments.

One of his main legacies is founding the Sundance Film Festival, now a mainstay of the indie film business, and the Sundance Institute, which helps burgeoning filmmakers realize their dreams.

The still striking-looking actor next appears in Disney’s effects-laden remake of the 1977 fantasy adventure “Pete’s Dragon,” as a wizened old wood carver named Meacham, who loves to tell tall tales about flying dragons in the woods to the local children in the rural Northwest. He co-stars alongside Bryce Dallas Howard, Karl Urban, Wes Bentley and pre-teenagers Oona Laurence and Oakes Fegley as Pete. Aside from the two main characters, the boy and the dragon, the film is an all-new story about an orphan boy who is discovered living in the woods by a thoughtful park ranger, who brings him home to her family, and discovers that he has been protected for six years by a remarkable dragon. David Lowery (“Ain’t Them Bodies Saints”) directs the live action family adventure from a screenplay he wrote with Toby Halbrooks. In addition to promoting the film, the iconic actor and filmmaker spoke about his legacy.

Q: Why did this role appeal to you?

Redford: It was very diverse from anything I had done up to that point and have subsequently done, and I’ve done some very dark films. The idea of going back to my own childhood, which was based on storytelling, because I grew up very near here in a very lower working class neighborhood (in Santa Monica, Calif.) where there was not much to do. Storytelling became something to keep you alive, and also storytelling was a way to see a world bigger than the one you were living in, and that had great appeal for me.

Since that was part of my upbringing it became part of me and I wanted to pass it on to my kids and my grandkids. I thought, “If you can ever do a project that really has magic in it and justifiable magic, you should do it,” and this was it. I didn’t see the other iterations of “Pete’s Dragon.” I had never read or I didn’t see the others, so to me it was brand new.

Q: Meacham is reminiscent of the colorful and wise characters from the Disney films of the ’70s. Did you know from the outset your character would serve as the storyteller of the piece?

Redford: Oh. I never thought of myself that way. I know that when we did the film (director) David Lowery was very welcoming in terms of, “Look, if you want to add something, here’s the character. Do you want to embroider it? Do you want to add something? Do you want to shift? I’d like your input.” He allowed me to enter the character and sort of have my own way with him about how he tells the story, how he sees the world and so forth. He was very considerate that way. That threw me even further in to it, to be able to sort of design my own character a little bit, in addition to what was written.

Q: How did that go? What were some of the things where you can say those were little things that I shaped, in a way?

Redford: Small things like, he’s a wood carver and to illustrate, he seems to be a man totally alone in this very small sphere of operating in this room that’s sort of dark, and he’s carving wood. Suddenly he hears something outside and it’s children. He decides to play a joke and he bursts out at them. I love that moment. I love that. Being able to explode out of it and scare them and then pull them together to tell them a story, and then make up a story that no one really believed but they liked hearing it, anyway. Then they find out, guess what? It’s true. I love that angle on it. I just thought it was fun.

Q: Though the story is set in the Pacific Northwest, you filmed “Pete’s Dragon” in New Zealand. There’s a rumor that you saved a horse you saw there during production. Can you elaborate?

Redford: We were traveling to the location and it was a long haul.  We came by this one area where there was this horse tied up to a fence and it looked like it was pretty well wasting away. Came by the next day, same thing. The day after that, same thing and I said, “Somebody’s not attending to this horse. It’s a horse being left to die.” So I got out of the car, undid the horse, gave him something to eat and we went on our way. I hope it survived.

Q: Your young co-star Oakes Fegley said that before he met you on this film, he knew of you from your work with The Sundance Institute.

Redford: Wow. That’s shocking. I would think that he would have seen me in films on television or something. To say the Sundance Institute at his age is kind of a sophisticated thing to say, because I don’t know how much that has gone out in the world.

Q: How do you feel about your legacy in that sense? Is the Sundance Institute the most important thing perhaps that you’ve really accomplished in your career or is it this incredible body of work?

For me, it’s just an extension of something I believed in, which is creating a mechanism for new voices to have a place to develop and be heard, and just keep giving them more opportunities and hope that it reaches broader audiences. If so, it’s not like you’re going against the film industry. You’re not going against the Academy. You’re just trying to enhance it. You’re trying to add more to it.

I think that was misconstrued for a long time, when I started Sundance. First of all it was in Utah, not here. So I was treated like an insurgent in the hills, come down and attack Los Angeles. It was simply because that’s the only thing I could afford, the land that I had in Utah. I couldn’t afford to do something like that in an urban environment. I also thought, what if we do it in nature? It might add something to it. It took awhile for that to get through, that I had good intentions.

Q: Speaking of Sundance, David Lowery premiered his film there, “Ain’t Them Bodies Saints.” Is that how he got on your radar and can you talk a little bit about him as a director from the actor’s standpoint or the director’s standpoint?

Redford: Well we love that film. It was in our festival and I really liked it. I thought it was well done. It was a very intimate story. When this came up, I thought well this is interesting. It’s got a weird sense of intimacy but not like, how do I say it? This is going, whoa, taking on a whole other thing. What’s that about? I was kind of curious about it and we spent some time. One of the things that helped was the part was narrower in the beginning and not totally flushed out. It didn’t need to be, because it was about the dragon, about the boy. He allowed me to have a say in the character. I could help develop the character further, so that he was more of an anchor to the story. He was very collaborative; he was very open to that. That allowed me to get to know him more. As a result, we’re doing a film in the fall called “Old Man With a Gun.” It’s a true story (that was reported on) in the New Yorker. It’s about a guy that kept robbing banks and he kept getting caught. The reason he did that was because what he really loved was escaping. He did it maybe 17 times.

Q: Where does it take place?

Q: What dreams do you have yet to achieve? What do you still want to do from your bucket list?

Redford: I don’t believe in bucket list. Just keep doing things that you want to do if you can. And you don’t think much else. You just say, “Oh I like to do this.” Then I’m going to see if I can do it and you keep moving forward. As long as you keep having new ideas to keep you going that’s all that matters to me.

Q: You’re a busy guy. Are you feeling a new vitality?

Redford: I think you keep going. I think I’ve been that way my whole life—always moving forward, trying new things. It helped that I was in athletics, because I could always do new sports and keep very physically active. I think that just passed on to my life in general, that I wanted to always be trying new things because it was exciting and it kept you active and alive. I think that’s just the way it is.