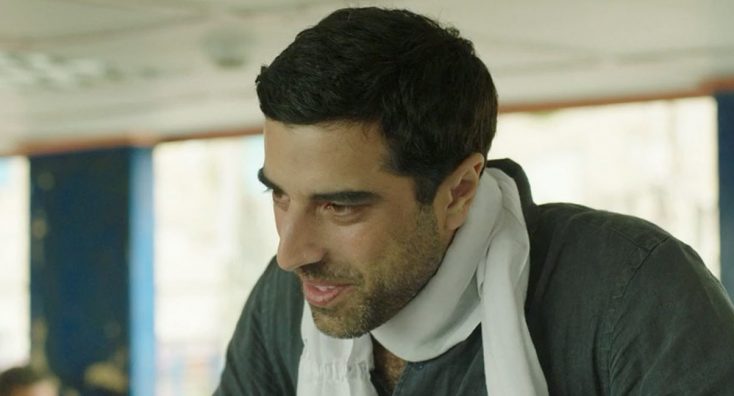 HOLLYWOOD—Growing up in war-torn Lebanon, Karim Saleh turned to Hollywood movies as an escape from the imminent dangers of the real world. His favorite actors were swarthy Italian-Americans Marlon Brando, Robert De Niro and Al Pacino, and he reveled in the films of Martin Scorsese and Sergio Leone.

“De Niro’s face is so Mediterranean, and we were living on the Mediterranean Sea, so it became this immediate identification with them,” Saleh says in a phone interview from his home in Los Angeles.

When he decided to become an actor himself, his Lebanese mother and German stepfather decided it was best for him to go to drama school in London, not only because he would receive a proper education but because he would only be four hours away by plane.

While Saleh received the formal education his parents had hoped for, he didn’t fit in at drama school and eventually was kicked out.

“For me, it almost was a waste of time being in England,” he says. “That made me a little less receptive to the doctrines of the traditional acting schools in England. I think my teachers picked up on that. That’s why it happened. It was because they knew I didn’t want to be there.”

What the young, dark and handsome actor, who was born in France but raised in Lebanon, wanted to do was learn Method acting that was practiced by his heroes, so he eventually made his way to New York and, despite his parents’ reservations, managed to launch a successful career on stage and screen.

Following a breakout role in the internationally acclaimed film, “The Hamburg Cell,” Saleh garnered roles with some of the most prolific filmmakers in the world, including Ridley Scott for “Kingdom of Heaven,” Steven Spielberg for “Munich,” and Adam McKay for the Academy Award-nominated political biopic, “Vice.”

On the small screen, he appeared in the critically acclaimed sci-fi series “Counterpart” and the drama “Sweetbitter” for Starz, as well as recurring role in the fourth season of Amazon’s award-winning series “Transparent.”

Saleh now stars opposite Andrea Riseborough, (“Battle of the Sexes,” “The Death of Stalin”) in Zeina Durra’s romantic drama “Luxor,” which was nominated for a Grand Jury Prize at the 2020 Sundance Film Festival. The story follows British aid worker Hana (Riseborough) as she returns to the ancient city of Luxor, Egypt for some respite after witnessing so much death and devastation, when she comes across Sultan (Saleh), a talented archaeologist and former lover. As she wanders the city, haunted by the familiar place, she struggles to reconcile the choices of her past with the uncertainty of the present. “Luxor,” from Samuel Goldwyn Films, will be available on Digital and On Demand Friday, Dec. 4.

The film, which evokes Richard Linklater’s “Before Sunset,” centers on the couple reconnecting 20 years after a whirlwind romantic relationship. The chemistry Saleh and Riseborough share onscreen moved off-screen as well. The two actors officially are a couple and recently finished filming their second movie together, “Please Baby Please,” in Montana.

Speaking by phone from Los Angeles, Saleh, who recently became a U.S. citizen, spoke about working on “Luxor” in which he plays an Egyptologist who begins to excavate the remains of a long-lost relationship with a beautiful international aid surgeon.

Front Row Features: This was your second project with writer/director Zeina Durra after previously played a supporting role her 2010 feature debut “The Imperialists are Still Alive!” Did you know she was planning to make this film?

Karim Saleh: No. Usually, I get a first or second draft or we chit-chat. She tells me what she’s working on. With “Luxor,” she took me completely by surprise. She sent me a script and asked if I wanted to audition for this part. When she first told me, I thought she was talking about another script she had mentioned to me, but she completely surprised me with this one. It was a beautiful move on her part because it allowed me to read it without any expectations. I was completely taken by surprise, and I really enjoyed the discovery.

FRF: Your shooting schedule was remarkably fast—less than three week. While the film is leisurely paced, I’d imagine you were rushing from one location to another.

Saleh: It felt like that, logistically. Emotionally, we were so connected to (the characters’) rhythm, and the rhythm of their journeys, that we didn’t really feel that. Like the Nile, which has its own speed, its own comforting flow, I felt like I was, internally, very much in the flow of things.

On the outside, every shoot is hectic—there are cables and other equipment to trip over, stuff you’re not supposed to touch, and everyone’s trying to do their best—those are just vocational things. People come to these projects because they have something to say and they want to express themselves. I’ve never been on a set where people are just coldly indifferent to what’s going on. So, of course it was hectic, and it was Egypt, it was a non-union (shoot). We weren’t under a lot of pressure with the logistics. The core of the film, the emotional experience of the film, is really captured onscreen.

FRF: Had you previously spent much time in Egypt?

Saleh: My career started because of Egypt. My mother was married to a German who had been to school in Egypt. His childhood friend became a director. So, when I got kicked out of acting school, my mom asked my stepfather what he thought I should do next, and he suggested I speak to his friend.  He had worked with Youssef Chahine who had worked with James Ivory and Ismail Merchant. They were producing a movie at the time (2001) called “Merci Docteur Rey!” Through that connection, I was sent to my first audition and booked my first job. We had gone to Egypt to visit my father’s friend and I had gone to Cairo a couple of times. I had made a movie or two in Egypt prior to “Luxor,” but the initial thing that got me my first job was through an Egyptian film director.

FRF: What was it like shooting on location in these ancient excavated sites?

Saleh: The best way I can describe is it’s like having a religious experience. It triggers a form of humility and opens up a possibility of understanding that there’s a huge part of the self that is unknown because you get a sense of discovery. You get goosebumps. It’s the feeling of elation of religion in its purest form.  Because it’s not religion in the frame of history, it hasn’t tried to convert me. It’s just there.  And because I came to it without any predisposition, it’s a religious experience that’s undefined. It’s polymorphous in nature—the Egyptian religion. It’s animal faces mixed with human bodies mixed with metaphor and symbolism. It’s so fluid in its nature. It’s not imposing, it’s not anthropomorphic in a way that’s overwhelming. It’s not contextualized. It’s almost like a freeform religious experience from 5,000 years ago that gives you goosebumps.

FRF: You and Andrea Riseborough only met one day before shooting, and yet you had this chemistry right away. So, what was it like working with her?

Saleh: I was trying so hard almost to disconnect from how overwhelming the chemistry was. I had prepared myself to fall in love with Hana as a character. I had already done a lot of preparation and practiced some of those scenes so I came ready and willing with the whole backstory between them in my mind but nothing prepared me for the actual experience.

I was trying to be extremely tactful and supportive. I was trying to do what Sultan was doing. I was trying to accompany her through that journey and be as delicate as I could. For me, it was a form of masculinity and courtship that doesn’t involve putting myself ahead of taking on her emotions or giving advice. It was almost a courtship of being there with her, of true companionship.  I was looking for the silences, those downbeats, where we were just between events with each other, experiencing something outside of us both, like when we’re in the temple of Karnak. That worked out because more than anything Sultan was being delicate and strong at the same time. So, I allowed myself to feel emotions in a very dignified and respectful way.

FRF: What are you working on now?

Saleh: Andrea and I just did a crazy film called “Please Baby Please,” set in an imaginary version of the 1960s for a director named Amanda Kramer. I also just filmed a TV show with Julie Delpy called “On the Verge” for Netflix, which reconnected me to some of my Frenchness. I’m about to go into another project with (Tatia Pilieva) who I previously did a short film called “First Kiss.”