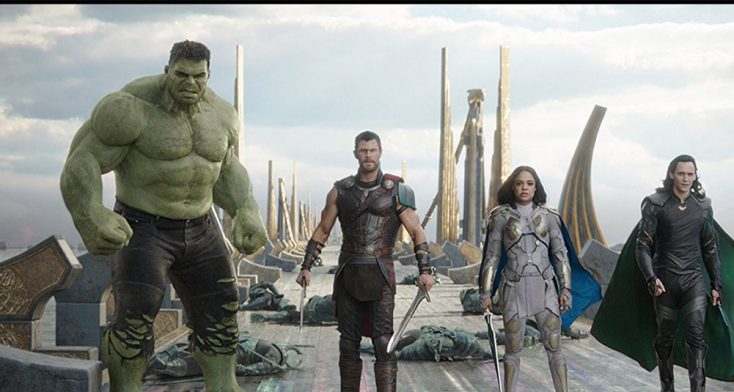 The surprisingly silly “Thor: Ragnarok” subverts the big-name superhero genre in a way that could signal a questionable shift in direction for future Marvel movies: Once they’ve gone wacky, can they ever go back?

Although every previous Marvel Studios film has been at least a little tongue-in-cheek, this third Thor outing marks the first time that any of the company’s previously established franchises has given so much screen time to comedy. The two “Guardians of the Galaxy” romps were primarily funny from the get-go, and always stood apart from the rest of what is referred to as the Marvel Cinematic Universe for exactly that reason. (That’s why the prospect of the Guardians intermingling with the rest of the Marvel stable in the upcoming “Avengers: Infinity War” crossover is expected to be a tricky oil-and-water proposition.)

Despite the inherent ridiculousness of comic-book heroes in general, whose abilities to fly, turn into monsters, crawl up walls or punch out giant robots automatically require some pretty extreme suspension of disbelief, Marvel’s trademark had been presenting its stories more as appealing modern myths than as self-mocking farces. The closest any Marvel Studios non-Guardians movie has gotten to being this outright goofy up to now may have been “Ant-Man,” which certainly couldn’t be accused of taking itself too seriously, but even it wasn’t as broadly laugh-happy as this. (Fox’s deliriously over-the-top “Deadpool” isn’t technically a Marvel Studios film, so it doesn’t count.) Yes, “Thor: Ragnarok” has some un-nutty moments, plus the usual level of violent pitched combat and CGI destruction, but its very broad sense of humor definitely predominates the proceedings.

If “Thor: Ragnarok” racks up big box-office bucks, will Marvel favor humor over heroics from now on, putting more “funny” in all of their funny-book flicks?

Granted, that certainly seems preferable to going darker. For over a decade, Warner Bros. has sucked anything resembling joy or fun out of its Batman and Superman big-screen bores by trying to put too much dreary dramatic weight on those characters’ caped shoulders. Marvel, on the other hand, traditionally has succeeded by finding precisely the right balance between adventurous heroics and just enough levity to make its good guys charmingly likeable.

The trouble with “Thor: Ragnarok” is that it plays more like a standalone parody than like a legitimate installment of the franchise. Its serious bits (including what should have been the more meaningful and melodramatic death of an important supporting character) do not blend well with its jokier moments (such as Thor—played as always by the jovially studly Chris Hemsworth— taking the equivalent of a narrated theme park ride to the strains of “Pure Imagination” from “Willy Wonka & the Chocolate Factory”). Sophomoric but admittedly amusing details include an outer-space portal called The Devil’s Anus, a frighteningly lethal weapon known simply as “the melt stick,” and rude references to Asgard as “Assburg.” Sophisticated, it ain’t.

Another reason fans may wish this movie was not part of the official Thor canon: Director Taika Waititi and screenplay writer Eric Pearson (working from a story by Pearson, Craig Kyle and Christopher Yost) playfully break so many of the franchise’s best toys by the time the end credits roll that they end up throwing out parts of the baby, most of the bathwater and finally the whole damned tub. Thor has lost girlfriend Jane Foster offscreen, gets his godly blond locks shorn, has his signature hammer destroyed less than a quarter of the way through the movie…plus there are at least three more frustratingly major developments that haven’t been spoiled by the trailer.

That wouldn’t be a big deal if this were only a standalone “Lego Movie”-type lampoon, with no effect on the “real” character’s continuity. But having to live with the significant changes that Thor and Asgard itself undergo here is even more annoying than when Nick Fury’s SHIELD organization was obliterated in “Captain America: The Winter Soldier,” or when Cap gave up his shield at the end of “Captain America: Civil War” (at least he got to hang onto the thing for most of the movie).

What’s even more unfortunate is that the previously non-verbal, rage-fueled but poignantly tragic Jekyll-and-Hyde creature known as Hulk has been turned into a chatty, green-skinned, Mike Tyson-style lunkhead who enjoys a nice hot-tub soak in between gladiator-style bouts. Turns out that after the events of “Avengers: Age of Ultron,” he somehow was transported to a distant planet run by the games-staging Grandmaster (played with deliciously hammy relish by Jeff Goldblum). Thor ends up there too, after a showdown with his sadistically nasty big sister Hela, the Goddess of Death (Cate Blanchett, looking drop-dead fabulous in a snug bodysuit costume with a huge-antlered headpiece).

Supporting characters include Tessa Thompson as a hard-drinking valkyrie who has turned her back on her responsibilities, shaved-head Karl Urban as the Asgardian turncoat Skurge (whose fondness for a pair of very Earthly semi-automatic rifles may be a plot point Marvel regrets in the wake of October’s Las Vegas shootings), and Idris Elba as former Rainbow Bridge dispatcher and current hero-in-hiding Heimdall. Tom Hiddleston is excellent as always as Thor’s devious half-brother Loki, Benedict Cumberbatch cameos as the sorcerer Dr. Strange, and Mark Ruffalo is suitably ruffled as Hulk’s brainy alter-ego Bruce Banner.

The most enjoyable supporting character is the endearingly mild-mannered arena fighter Korg (voiced by director Waititi), a large rock-skinned alien resembling a blue version of The Thing from the Fantastic Four. His commiserating comments while Thor reminisces about the wonders of his beloved former hammer are low-key hilarious.

One probably unintentional but touching aspect of the short cameo by Marvel Comics mastermind and Thor co-creator Stan Lee is the sight of Lee’s wedding band on his finger. (Lee’s wife of 69 years died in July at age 95.)

The movie’s quirky videogame-synthy score is by Devo’s Mark Mothersbaugh, but the two best musical moments are battle scenes choreographed to Led Zeppelin’s relentless “Immigrant Song” (with its fitting reference to “the hammer of the gods”). A mid-credits scene presents a fateful cliffhanger encounter, and a final after-credits bit is good for one last gag.

“Thor: Ragnarok” isn’t as full-camp zany as the 1960s “Batman” TV show, but it’s definitely leaning in that direction. Will we ever be able to take Thor even semi-seriously again? The God of Thunder only knows.