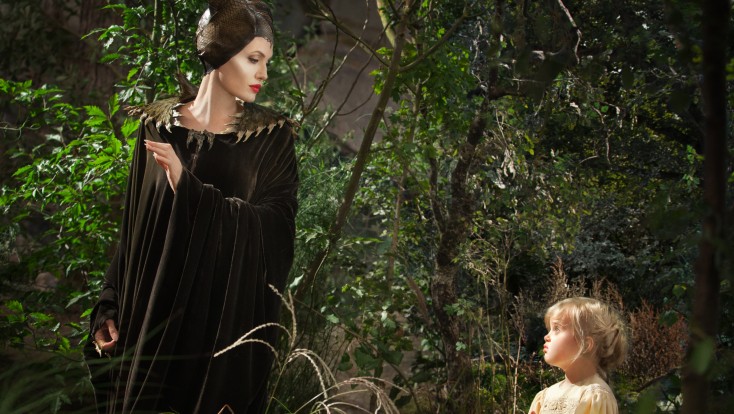 The “Maleficent” Blu-ray/DVD/Digital package is available for gifting and collecting on Tuesday, Nov. 4, and it’s worth buying. The home entertainment offering looks and sounds amazing and the short extras are either informative or quite fun, although a comprehensive “making of” featurette is missing.

You probably know the iconic animated, lead character figure from childhood; weird black “horn” cowl/hat, long black and purple dress and cape, magic staff with a crow sitting atop it. This is Maleficent, the wicked witch character who curses Sleeping Beauty to her long nap. Disney brought one of its most frightful villains to vibrant, live-action life and Angelina Jolie really devours the role.

This new rendition of the Sleeping Beauty tale focuses upon a fairy kingdom called The Moors in which young queen Maleficent, played as an adult by Jolie, happily grows up sharing her realm with magical wood creatures and soaring around using her magnificent and powerful wings. When she is a teen, Maleficent meets a human boy named Stefan who comes to the Moors from the nearby human kingdom to steal a jewel but both are smitten and he keeps returning for visits. Finally, when both are 16 and she is very much in love with him, he seals their relationship with what he calls “True Love’s Kiss.”

Maleficent falls victim to ambition and betrayal when the dying human king, whom she and her forest types have beaten in battle, challenges anyone who can kill her with the reward of being his heir. Stefan’s driving ambition makes him the ideal candidate. Stefan, played in adulthood by Sharlto Copley, betrays Maleficent in a really horrible way leaving her soul-less and full of a desire for the ultimate revenge. You know the story. She curses now King Stefan’s baby daughter Aurora to prick her finger on a spinning wheel spindle when she is 16 and be cursed to a deep sleep until awakened by her own “True Love’s Kiss,” which Maleficent is certain doesn’t exist.

Aurora, played as a teen by the lovely Elle Fanning, has been raised in hiding by three inexperienced pixies, enacted with silly charm by Imelda Staunton, Juno Temple and Leslie Manville, who live with her in the woods, barely knowing how to feed her. Aurora grows up not only unafraid of Maleficent but considering her a worthy fairy godmother. Maleficent has fun teasing the pixies and enlists the aid of Diaval (Sam Riley), a young man she rescues from a horrible beating and turns into a crow so that he can spy for her.

Will the tortured Maleficent learn to care for young Aurora enough to risk her life to thwart her own curse? Does “True Love’s Kiss” really exist?

“Aurora: Becoming a Beauty” focuses on Fanning revealing that she wanted to be a princess as a kid and that she saw herself in the blonde Disney-animated Aurora. She looked forward to expanding and fleshing out the character. We see the young actress reveling in an on-set mud fight that she describes as being “like having a mud mask facial!” Cute extra.

“From Fairy Tale to Feature Film” offers Jolie on bringing her fave Disney villain to life. Writer and producers talk about the changes made from the original fairy tale and Disney animated classic to make the feature film complete. It was an effort to make Maleficent frightening and strong, yet pitiable. Jolie admits that her full icon look “scares babies” including any on set except for her own young daughter (Vivienne Pitt), who won the role of very young Aurora as a result. We see Jolie and her husband Brad Pitt on set guiding their girl. This is quite an entertaining extra.

“Building An Epic Battle” breaks down the scene in which the human king and his troops challenge Maleficent and her Moor kingdom beasties. The on-set footage includes green screen work and Jolie on her special tilting flying rig. This is the closest the home entertainment offering gets to a “making-of” featurette.

In “Classic Couture,” costume designers explore Maleficent’s look. Her cowl and horns headdress was adapted directly from the Disney animated “Sleeping Beauty.” This is so interesting and colorful that it would have been nice to see much more of it. It’s very short. “Maleficent Revealed” provides more on set with the younger Maleficent and explores the film’s excellent special visual effects. “Deleted Scenes” reveal more of the story and are worth watching.

This Blu-ray/DVD/Digital set is missing a director’s audio commentary and how great would a lot of bloopers, line flubs and on-set goofs have been to watch? What is here, extras-wise, is informative and entertaining but more on set featurettes and actor interviews would have made this new take-home classic complete. The film itself all turns on Jolie’s amazing performance. Unfortunately, the rest of the tale doesn’t fare so well. There are unexplained story holes and, although competent, the other actors simply don’t match Jolie for creating a totally fleshed-out and fascinating lead character.

Film and Blu-ray Grade: A-