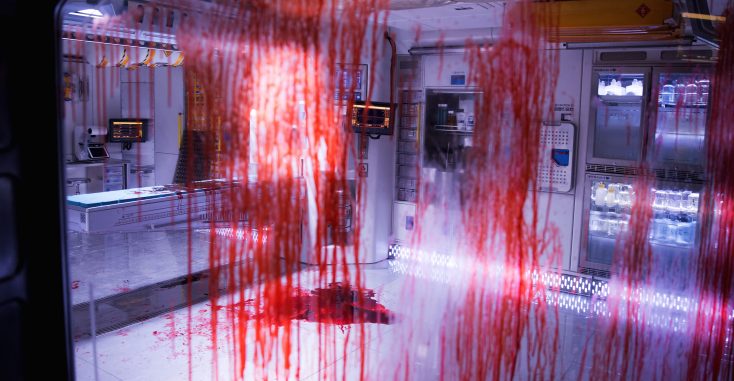 This missed-opportunity follow-up to 2012’s “Alien” prequel “Prometheus” is so frustratingly disappointing that the next installment could be forgiven if it explained that everything here was just a very bad dream that only occurred in David the devious android’s disembodied head.

Franchise fans will recall that “Prometheus” ended with (spoiler alert) Dr. Elizabeth Shaw (Noomi Rapace) and the ripped-off noggin of a synthetic named David (Michael Fassbender) exiting the planet where they had discovered a still-living giant from the species that created humankind. Although that murderous engineer (as they referred to him) had made life extremely unpleasant for the Prometheus crew until he was dispatched, sole human survivor Shaw remained sufficiently curious that she wanted to find his home planet for some existential answers, instead of returning to Earth.

When we learn what resulted from her quest in this movie, however, the reveal is thoroughly unsatisfying. What had the potential to be a truly awe-inspiring encounter with virtual gods is given such short shrift that it brings to mind the ridiculously abrupt ending of “Monty Python and The Holy Grail.” It’s as if the screenwriters here (John Logan and Dante Harper, from a story by Jack Paglen and Michael Green) were so disrespectfully dismissive of what went before by writers Jon Spaihts and Damon Lindelof that they preferred sweeping aside its outcome with insulting brevity, instead of building upon such a fascinating foundation.

Even worse, the story they apparently were more interested in telling is so generic and hopelessly derivative that it plays like the kind of uninspired, milk-the-franchise sequel that usually goes straight to video. And although “Alien” and “Prometheus” director Ridley Scott is back, “Alien: Covenant” lacks the distinctive style and quality of either film. Scenes aboard the colony ship Covenant have none of the terrifying, claustrophobic menace that permeated scenes on “Alien”‘s Nostromo (although inserting a “dipping bird” on a table in one shot is an amusing homage) or the living hell where it makes landfall. Neither does it offer the icy, clinical chill of the bad doings aboard the Prometheus, or the spooky planet where it lands.

Instead, most of the requisite chest-bursting, teeth-telescoping and such in this movie takes place on an Earth-like planet where star-faring beings so advanced they could create new life forms apparently resided in crudely primitive confines that look uncomfortably similar to the mud-dull decor of underground Zion in the likewise lackluster “The Matrix Revolutions.”

Also, both movies include the preposterously unlikely appearance of golden oldie AM radio hits (Stephen Stills’ “Love the One You’re With” in “Prometheus,” John Denver’s “Take Me Home, Country Roads” here). Maybe there’s an awesome-mix crossover with “Guardians of the Galaxy” in this franchise’s future.

No one in the cast is as impressive as the frighteningly convincing Fassbender, reprising his role as David and also playing an identical newer-model synthetic named Walter. A delicious decades-earlier flashback that opens the film features freshly activated David and arrogant corporate titan Peter Weyland (Guy Pearce) in a sterile white room with only a piano, a chair, a painting and a mountain view. It’s too bad that this is about it for any creepily minimalist “Prometheus” (or “2001: A Space Odyssey”) style ambience. Instead, screen time is wasted on things like a “Star Trek” style burial-at-space, an interrupted shower-sex scene that is B-movie embarrassing and, I kid you not, a flute lesson.

A final supposed-to-be shocking revelation won’t be one for anybody who has managed to pay attention, because the game already was given away by something in an earlier scene. Assuming that the Covenant’s crew would be aware of the same information we know, it’s impossible to believe that anyone left alive would be taken by surprise.

Jerry Goldsmith’s haunting theme from the first “Alien” appears frequently enough to remind everyone that this sixth installment in the franchise is unworthy of it, so including it probably was a mistake.

Here’s hoping that number seven in the series opens with exactly the same shot as this movie—one of David’s blue eyes in extreme close-up—as he awakens from this unfortunate nightmare into a more fulfilling future.