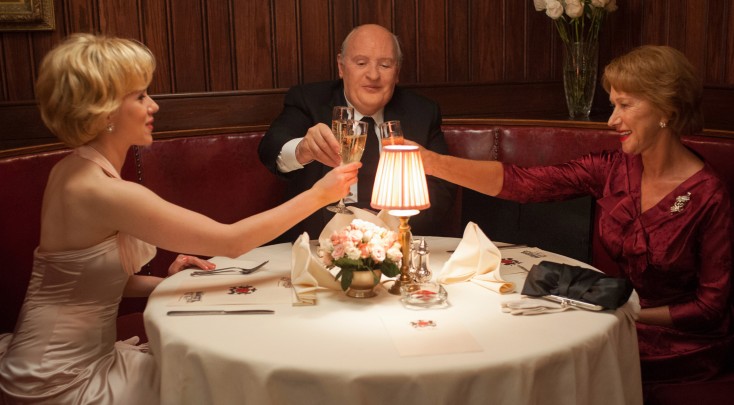 “Hitchcock” mixes some Hollywood hokum with its history, but what’s surprising is how enjoyable a seasoning of campy soap-opera makes this offbeat concoction. Watching director Alfred Hitchcock’s insecurity, paranoia, alcoholism, and creepy lust contend with his ambitious megalomania and imaginary-friend delusions may not sound like a fun night out, but “Hitchcock” is just tongue-in-cheek enough to be guilty-pleasure good.

Anthony Hopkins is a hoot as the deadpan but quietly sly Hitchcock. Although not completely convincing in appearance or demeanor as the master of suspense, and looking decidedly odd with a prosthetic stomach to fill out Hitchcock’s famous silhouette, Hopkins nevertheless creates a character who is hard not to like. Obsessed with proving he’s not over-the-hill obsolete at age 60, Hitchcock mortgages his house and gambles his reputation to bring “Psycho” to the big screen in 1960.

Helen Mirren is Hitchcock’s indulgent, efficiently competent and supportive wife Alma Reville, who feels unappreciated for the part she plays in helping hubby create his masterpieces. Her friendship with writer Whitfield “Whit” Cook (Danny Huston), who scripted Hitchcock’s 1951 “Strangers on a Train,” teeters on the edge of adultery when the two begin working together on adapting a non-“Psycho” script that Cook hopes will find favor with Hitchcock.

Scarlett Johansson is excellent as “Psycho” star Janet Leigh, the latest in a string of “Hitchcock Blondes” with whom the ever-tolerant Alma has contended. Johansson is at her best in a strange re-creation of “Psycho”‘s shower scene during which the momentarily deranged director himself is wielding the butcher knife.

Director Sacha Gervasi, whose only previous feature was the exceptional rock-band documentary “Anvil: The Story of Anvil,” never lets the marital-discord melodrama or Hitchcock’s personality disorders get unpleasantly gritty. Watching a feverish Hitchcock gather grains of sand from his bathroom floor into an aspirin bottle to prove Alma’s infidelity is as deliciously over the top as seeing him spy on undressing actress Miles through Norman Bates’ peephole.

Behind-the-scenes bits include references to Fox trying for the third time to get Hitchcock to direct “The Diary of Anne Frank,” which certainly would have been intriguing, and the fact that Hitchcock turned down the chance to direct the James Bond film “Casino Royale.” Examples of amusing company-town dialog in “Hitchcock” are Paramount chief Balaban snidely asking if “Psycho” is “still a picture about a queer killing people in his mother’s dress,” and actress Leigh praising Hitchcock by noting that “compared to Orson Welles, he’s a sweetheart.” Worried that “Psycho” could be a box-office bomb, a studio exec notes with relief that “thank God we have ‘Cinderfella’ for the holidays.”

Hitchcock directly addresses the audience at the beginning and end of the movie, just as he famously did in every episode of his long-running TV series. By that time, it’s hard not to wish he could be back next week with a new episode.