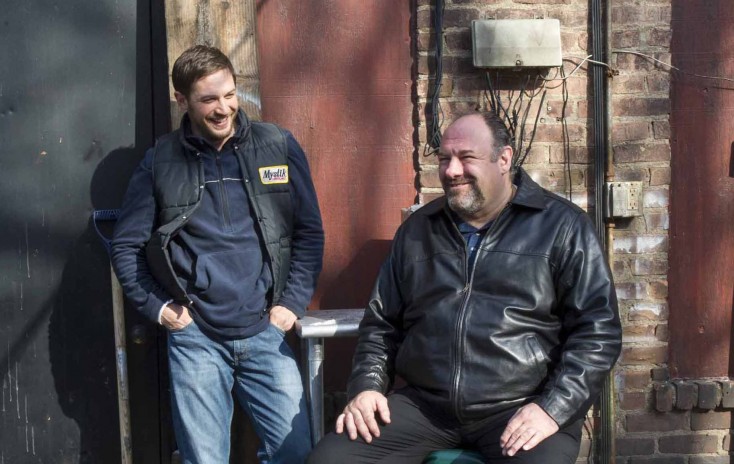 A well-chosen cast led by Tom Hardy, Noomi Rapace and the late James Gandolfini makes this understated and satisfyingly suspenseful film noir drama a great adult alternative to the rom-com retreads and live-action cartoons that litter most multiplexes.

Hardy stars as the quietly diligent Bob Saginowski, a seemingly slow-witted but sincere bartender who has worked at the same Brooklyn dive for nearly a decade. The joint is run by his bossy and bitter cousin Marv (a Tony Soprano-style sinister Gandolfini). Marv used to head a small-time criminal outfit that included Bob, before Chechen gangsters came to town. These days, the bar he was forced to sell to them is one of several that is used on a rotating basis for a nightly “drop” of ill-gotten gains from their various criminal enterprises.

When the place is robbed of the gang’s loot by masked gunmen, the Chechens are suspicious that it’s an inside job. That would be bad enough, but the resulting police attention to the bar makes things even more uncomfortable for Marv and Bob.

An added source of tension comes from dangerously unstable local psycho Eric Deeds (Matthias Schoenaerts), whose beaten puppy Bob finds one night on his way home from work. Bob rescues the abused pit bull from where he was tossed in a trashcan belonging to the very dog-friendly Nadia (Rapace). Her troubled past with Eric is a sore spot, especially when he decides that he wants the pooch, and Nadia, back. The former “cuckoo house” inmate threateningly tells Bob that life is “people like me coming along when you’re not looking,” which pretty well sums up the state of things.

The first-time screenplay by “Mystic River” and “Shutter Island” novelist Dennis Lehane, adapted from his short story “Animal Rescue,” tempers its crime-thriller elements (such as a black plastic bag bearing a bloody body-part message) with interestingly human character touches. Marv lives with his cowed but resentful big sister, and their father is on life-support at a nursing home. Nadia is glad that Bob doesn’t ask about the scars on her throat that she says she got from stabbing herself with a potato peeler.

And the mostly silent Bob is deferential to Marv, shyly tentative around Nadia and almost childlike in his encounters with a probing detective (John Ortiz) and a reptilian crime boss (Michael Aronov). Seeing what happens when this still-waters-run-deep stoneface is placed in real jeopardy is worth the wait. Like “Shutter Island,” the plot has a wickedly clever hardboiled ending. It’s an “everything you know is wrong” shocker that may make you want to see the movie all over again, equipped with a different perspective on this sordid little world.

Director Michaël R. Roskam (whose previous credits include “Bullhead,” which starred Schoenaerts) mostly foregoes unnecessary flashiness, but has a strange fondness for introducing characters to scenes as blurry background figures that are brought into focus when they are acknowledged. The late-December New York chill and general working-class grittiness is convincingly uncomfortable, and brief scenes of brutality are swiftly efficient.

Aside from rare instances of amusingly deadpan dialog (such as Nadia telling Bob that “Mike is not a great name for a dog”), “The Drop” plays this tale of paranoia, retribution and questionable redemption refreshingly straight. And even though Gandolfini’s role is a supporting one, his performance is a worthy career-capper that is sure to be enjoyed by fans of “The Sopranos” and crime thrillers in general.

Tags:Dennis Lehane, James Gandolfini, Noomi Rapace, The Drop, Tom Hardy
Previous PostJames Franco Will Make You An Offer You Can’t Refuse – 2 Photos
Next PostMissing Suspenseful ‘The Drop’ Would Be a Crime – 3 Photos