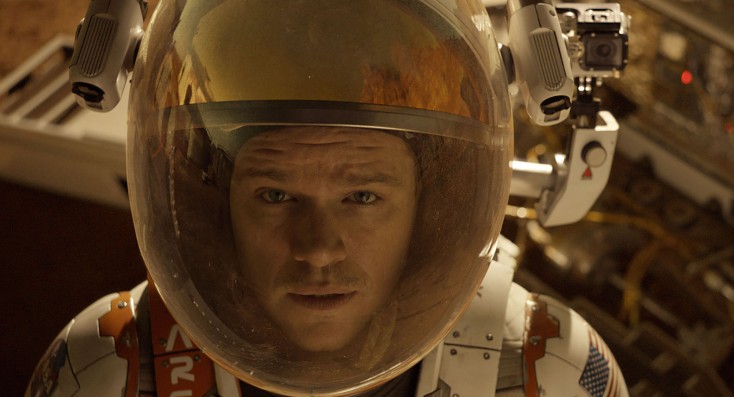 Never fully committing either to high-emotion melodrama or the cold equations of a grim techno-thriller, “The Martian” adequately straddles both genres thanks to the likeability of star Matt Damon as an impressively improvising astronaut.

Left behind on Mars when his crewmates mistakenly think he has been killed, Damon’s character thankfully never wallows in blubbering “watch me act” histrionics a la Matthew McConaughey in last year’s abysmal “Interstellar.” (In the déjà vu department, Damon played a stranded astronaut in that movie as well, albeit one who ended up going murderously mad.)

Still, it’s odd that we never see Damon’s charmingly can-do character Mark Watney communicate with the parents he asks his commander to contact if he dies, and that Watney otherwise never mentions a single friend, lover, pet or passing acquaintance back on Earth that he misses. Although we see him use the toilet, there’s no indication that he ever masturbates, or even that he so much as fantasizes about females (or males, for that matter) during his isolation.

Instead, we watch him industriously “science the s*** out of” making the best of his very bad situation by coming up with clever ways to create enough oxygen, water and food to tide him over until a rescue ship can arrive. Even if everything but the growing-potatoes-in-poop part is beyond most ticket-buyers’ technical knowledge, how Watney accomplishes all of this is plausible enough to be convincing.

NASA is shocked and not a little embarrassed to discover that Watney was left behind alive, having already given the guy a hero’s funeral. Jeff Daniels plays the agency’s perpetually constipated-looking director with the humorless stuffiness of a stock old-white-guy bureaucrat. Nearly everyone else we see on Earth, however, seems to have been cast with cover-all-bases multiculturalism in mind, and every female has a fabulously fit fashion-model figure. (That even goes for the remarkably well-toned if bizarrely cast Kristen Wiig, as NASA’s head of media relations.)

Chiwetel Ejiofor is the frustrated but sincerely determined Mars mission director Vincent Kapoor (a character whose last name didn’t change after India’s Irrfan Khan passed on the role). The tousled-blond hottie in charge of satellite operations (Mackenzie Davis) shows up at a meeting wearing an untucked shirt under what looks like her little sister’s sweater. The slovenly and sitcom-eccentric astrodynamics expert (Donald Glover) looks hipster homeless. And having international box-office powerhouse China offer to assist NASA’s rescue operations feels like pandering excess.

The movie overplays its “Guardians of the Galaxy” hand by jukeboxing the soundtrack with ridiculously unlikely bygone disco classics that are supposed to be the only music Watney finds on a left-behind laptop. A scene featuring David Bowie’s 1972 “Starman” comes off like another strangely anachronistic sop to baby boomers. (Maybe someone thought his “Life on Mars?” would have been too on-the-nose.)

Despite the fact that director Ridley Scott’s previous space-based “Alien” and “Prometheus” were less reality-based SF fantasies, both played things straighter and seemed more sincere than “The Martian.” That’s partly because Watney seems to be in a different movie than the rest of the characters, one without goofy scenes in which coffee is spat into a wire wastebasket or a stapler serves as a spaceship surrogate. “The Martian” additionally strains credibility by expecting us to believe Watney’s crew would not be informed that he’s alive until two months after NASA knows. Everyone also “talk types,” and the screenplay (by Drew Goddard, based on the novel by Andy Weir) includes pop-culture references to everything from Elrond to Iron Man to ABBA.

Still, it’s hard not to get caught up in Watney’s perilous plight, which has considerably better production values than 1964’s “Robinson Crusoe on Mars.” And if the movie inspires any of today’s youth to stay in school and learn stuff (such as the importance of not ignoring a storm forecast if you’re a mission commander, which would have saved taxpayers untold billions by the end of the film), that can’t be a bad thing.